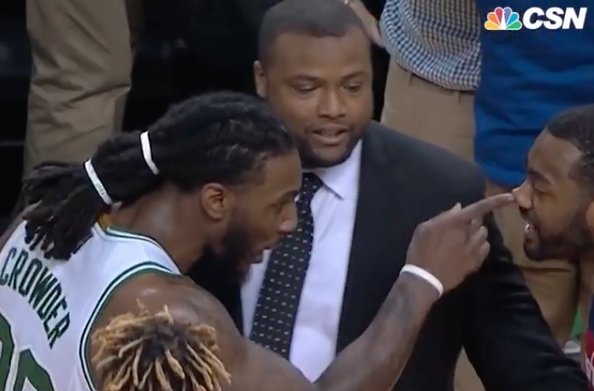 We here at KSR are very anti-violence and super anti-slapping, but we’re also against touching another grown man in the face. So with all those strong beliefs and morals, we are torn over John Wall’s gentle slap to the Celtics’ Jae Crowder last night, which we shared with you earlier this morning.

It’s never a good look for a former Cat to be tussling after games in the Association, but let me ask you: was Wall’s slap warranted?

See it again one more time:

In my opinion, hell yes. Crowder asked for it when he poked Wall’s nose. That’s a fightin’ move. Touch another man’s face like that and you get whatever you get, whether it be a limp-handed slap or a broken jaw. But others may not feel the same, so lend your opinion in the poll below:

Now tell us who would win the fight if they weren’t separated by coaches and teammates (and actually wanted to fight)?

20 Comments for Was it OK for John Wall to slap Jae Crowder?