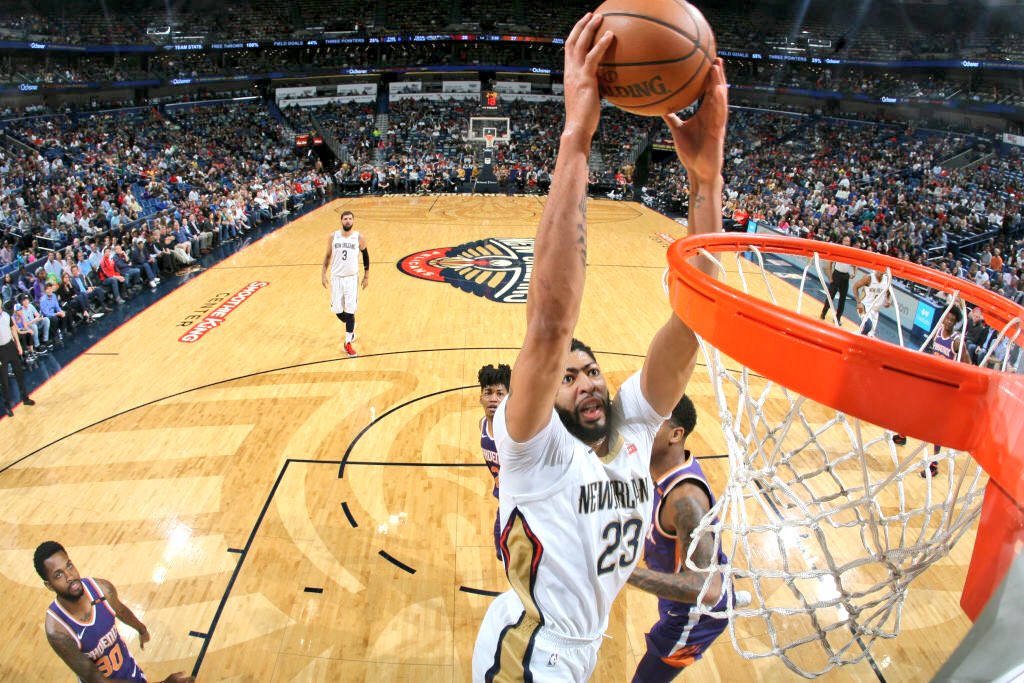 No Boogie? No problem.  The Brow’s got this.

Last night Anthony Davis out-dueled Devin Booker to lead the New Orleans Pelicans to their sixth consecutive win.  Booker scored 40 points, but he could not keep up with Davis, who finished with 53 points, 18 rebounds and five blocks in the 125-116 win.  Davis is only the second player to ever record a 50-point, 15-rebound, 5-block game.

Davis’ game was great, but The Real MVP is the Pelicans’ social media staff.

In case anyone's interested, here's some highlights of the most overrated player in basketball. pic.twitter.com/njqs0wxKxn

Davis has stepped up his game in Boogie’s absence.  Through the six-game win streak he is averaging 41.5 points, 14.8 rebounds, 3.2 blocks and 3 steals per game.  Wow.

The Kentucky Wildcats are rolling through a three-game win streak.  This afternoon around 2:00 the head coach will talk about his streaking team as the Cats prepare for the final two games of the regular season.

Clear Bags at the SEC Tourney

The SEC announced yesterday they will continue to have a clear bag policy at all championship events.  If you aren’t prepared for it, you probably haven’t been to a game in two years.  Click here for a clear bag policy refresher.

A Big Night of SEC Basketball

We will have a much clearer SEC Tournament picture after Super Tuesday.  All three teams tied for third place with Kentucky are in action tonight.  If Arkansas, Florida and Miss. State all fall, the Cats are primed to lock up a double-bye in the SEC Tournament.  A complete look at tonight’s packed slate of games:

Following a trip to Kentucky for Junior Day, Georgia outside linebacker KD McDaniel committed to Kentucky.  The three-star linebacker is Mark Stoops’ second commitment in the 2019 recruiting class.  For the “wait till Signing Day” crowd, know this: the second player to commit in the 2018 class, defensive end Davaon Hawkins, signed with UK in December and was one of Freddie’s favorite additions in the class.

Spring Practice begins next week (you can now get your Spring Game tickets here).  Before kicking off five weeks of football, Mark Stoops sat down with Matt Jones on Hey Kentucky to reflect on his first five years as Kentucky’s head coach.