The current group of Cats weren’t the only players getting it done on the hardwood last night. The former Cats in the NBA were in action across the nation and just about all of them put up some big time numbers. Let’s take a look, broken up by the 4 players whose teams won and the four players whose teams came up a bit short. 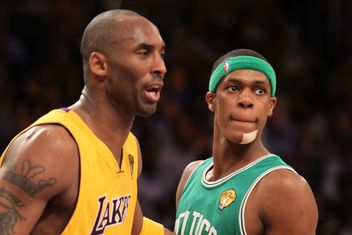 After a quick breakfast with Kobe and rumors of the two joining forces at some point in the future, Rondo put up some big time numbers against LA. The PG was just two boards shy of another triple-double as he strengthened his grip on leading the league in assists per game. Rondo is showing no signs of slowing down in his 9th season.

Wall, Bledsoe, and Knight continue to do their part to lead their teams towards a spot in the playoffs. Kentucky is point guard U and the PGs got it done last night in 4 wins. Nerlens was solid for the Sixers as he posted his 3rd double-double of the season against Serge Ibaka and OKC. The Sixers kept it respectable but were unable to win their second game of the season. Noel is off to a solid rookie season but hopes of him taking down Jabari or Wiggins for rookie of the year are looking miniscule.

Tonight the Kings, Pelicans, Sixers, and Suns are back in action if you have league pass and want to watch our former players ball instead of boring Big 10 football. The former Cats are taking over the NBA with no signs of slowing down. If they aren’t already, it won’t be long until one of these guys is a major force on a championship contender.

5 Comments for The NBA Cats Showed Out Last Night