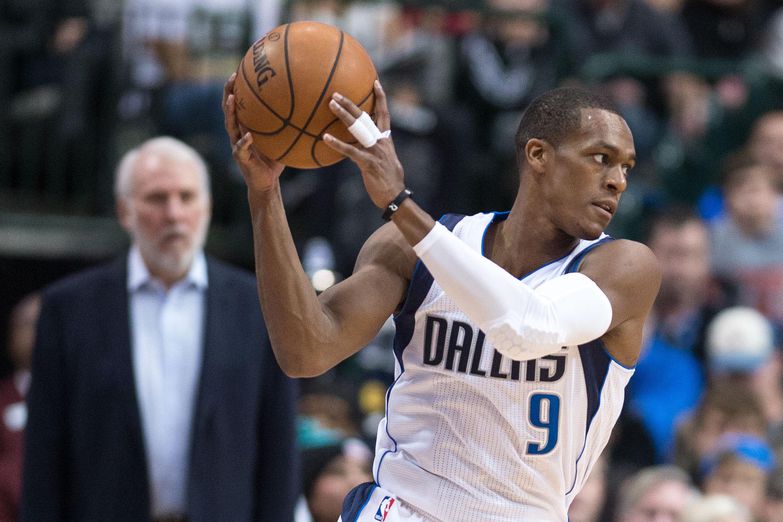 After being traded by the Boston Celtics, PG Rajon Rondo finally made his Dallas Mavericks debut.  It wasn’t a great performance from the former Wildcat, but he showed glimmers of what’s possible at his new home.  For the night, Rondo had a stat line of 6 points, 7 rebounds, 9 assists, and 2 steals.  While only shooting 3-of-11 from the field, he was just a few stats short of a earning another career double-double.  Not bad for a debut with a team you just joined.

Rondo hasn’t even had a full day of practice with the Mavericks, yet debuted as their starting point guard.  That’s not all too surprising, but many questioned how he and teammate Monte Ellis would mesh.  Considering Ellis scored 38 points, I’d say Mark Cuban is a smart man.  With their recent addition of Rondo, Cuban has put together the pieces for the Mavs to make another deep playoff run.

“He scored 38 points, so I didn’t hold him back too much,” Rondo said of Ellis after their 99-93 victory. “We both like to dominate the ball, but I think we played well off each other tonight.”

Rondo also had a pretty good defensive game, drawing 4 offensive fouls.  That’s one stat that doesn’t show up on the sheet, but are still turnovers caused by Rondo.

“I just try to do the intangibles. I didn’t make a lot of shots tonight, so I just wanted to go in on the defensive end of the floor and make plays for my team and get the ball back for more possessions.”

We will definitely have to keep an eye on the Mavs, as Rondo hopes to earn another NBA Championship.