All of those NBA deals we’ve been hearing about for the past week became official today. Rajon Rondo signed his contract with the Los Angeles Lakers, proof that sometimes, the former Cat actually smiles.

“We are thrilled to have Rajon bring his off-the-charts basketball IQ to the Lakers,” said General Manager Rob Pelinka. “He has a proven ability to play at an elite level during playoff and championship runs, and that is a highly valued skill. Rajon is also respected around the NBA as an extremely hard worker and relentless competitor and that mentality is key to how we want build our roster.”

Isaiah Briscoe’s contract with the Orlando Magic is now official as well.

As is Oklahoma City’s trade with Charlotte for Hamidou Diallo: 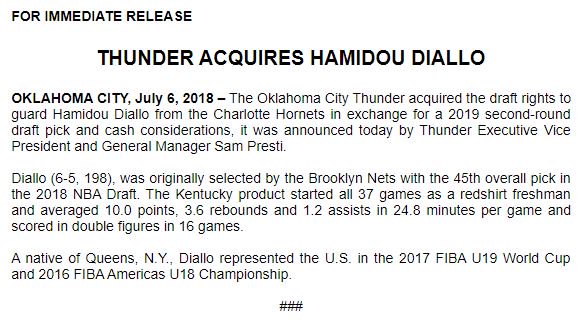 You can watch Briscoe’s debut with the Magic at 5 p.m. on NBTV and Diallo, Dakari Johnson and the Thunder vs. Malik Monk and the Hornets at 5:30 p.m. on ESPNU.