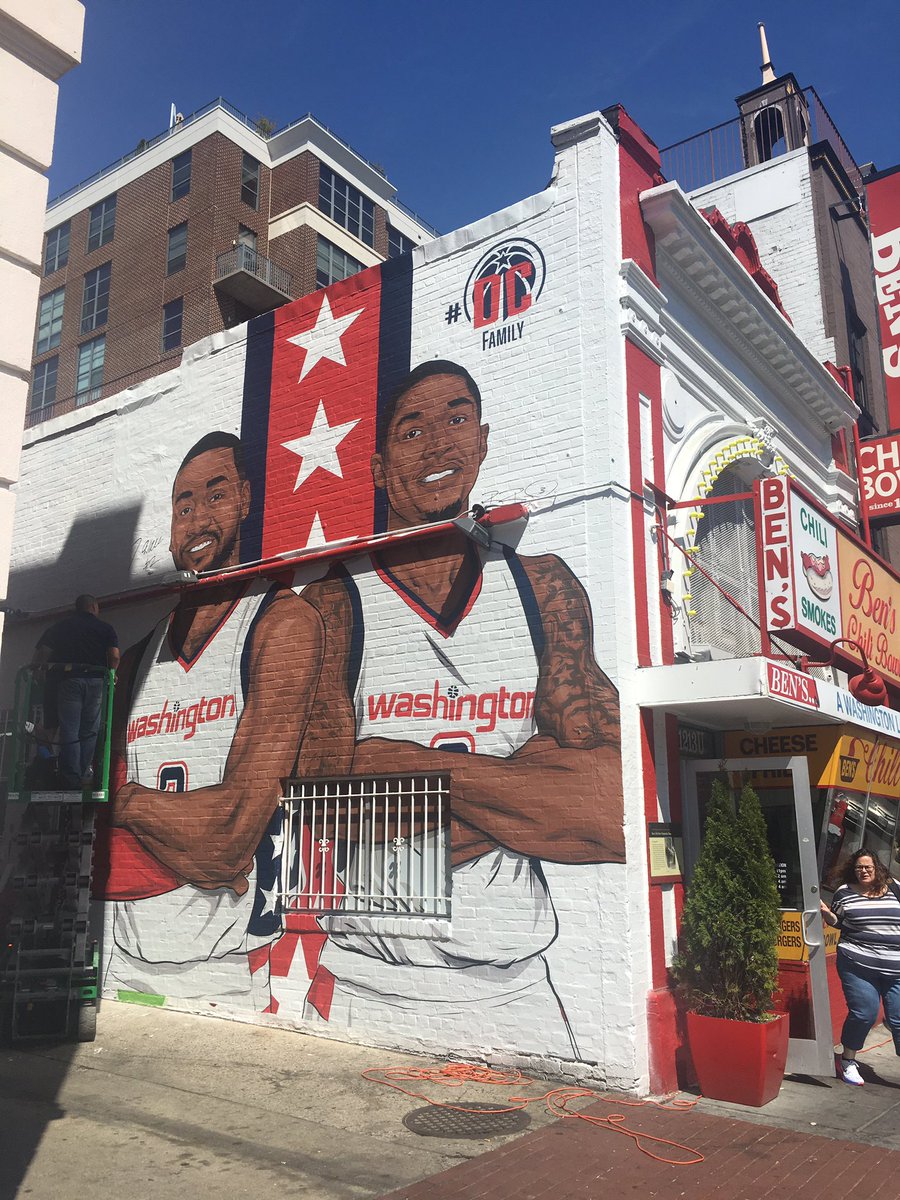 Wall’s new D.C. mural is on the famous Ben’s Chili Bowl, via @ChiniStatus.

John Wall is a bonafide superstar…in Kentucky.  He doesn’t always receive that kind of treatment, and I’m not just talking about Colin Cowherd.

For the last two years, the NBA All-Star point guard has worn generic Nike shoes.  After signing a $25 million deal with Reebok before entering the NBA Draft, Wall’s shoe game sputtered.  He made a move to Reebok’s parent company Adidas, but turned down a 2015 offer for $7.5 million a year.  Wall wanted “James Harden money.”  He didn’t get “James Harden money” because his name still doesn’t carry the same weight, writes The Ringer’s Haley O’Shaughnessy.

During the 2014—15 season, prior to Harden’s historic deal, the Rockets were featured on national television 25 times; the Wizards were shown 15 times. Last season, Washington managed just five scheduled appearances. This year that ballooned back up to 14, far behind Houston’s 27. While that kind of exposure is notable, it’s wrong to chalk up the soft Wall market simply to a lack of TV time; the man is nicknamed “Wall-Star” and is regularly called the best point guard in the Eastern Conference.

Wall is not discouraged.  He believes the tide is about to turn back in his favor.

Still, it felt like last summer’s “Harden money” snub was hurting Wall all over again. Wall was still without a shoe deal, and frustration was bubbling over. In August, The Ringer’s Kevin O’Connor wrote that he was “the face of the Wizards franchise, but he’s wearing a cloak of invisibility,” after Wall told The Vertical that February, “I ain’t got no billboards in D.C. … I want to leave a legacy and you can’t leave a legacy hiding behind the doors.”

It’s been nearly eight months since Beal’s contract, and Wall’s having the best season of his career. Windhorst, who spent time with the guard in February, says Wall “is convinced he’s going to get the last laugh on all of it. The salary, the shoe deal, the doubters.” And he may be right: Just a week ago, Wall finally got his billboard, Washington-style. He and Beal were painted (above) on the side of the city’s iconic Ben’s Chili Bowl, a famous mural wall that last featured another D.C. legend, Barack Obama.

Wall’s proving ground is the NBA playoffs.  He’s never appeared in the conference finals, but right now, the Wizards are rolling while he does stuff like this…

Wall with a clutch bucket on @NBATV! pic.twitter.com/MwfIRudpte

That stare down though ðŸ˜³ pic.twitter.com/JWOfjuSLY3

For the second consecutive game Wall scored a career-playoff high 32 points in a win.  He added 9 assists and 5 rebounds to give the Wizards a 109-101 win and a 2-0 series lead over the Hawks.