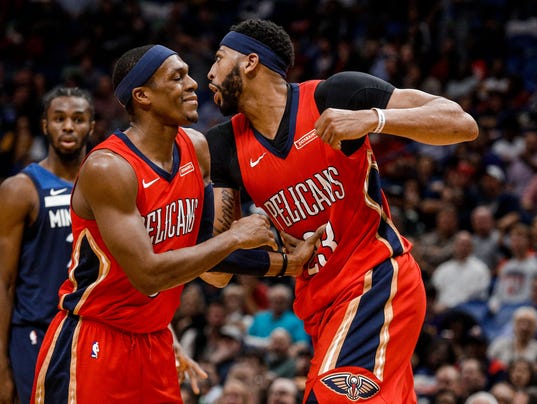 Turn on TNT to see the New Orleans PeliCATS take on the Golden State Warriors in the first game of Round 2 of the NBA Playoffs.

All of the “analysts” have picked Golden State to win the series, but seeing how New Orleans is playing, it’s not a sure thing. Anthony Davis knows that.

“We know that we can beat them,” Davis said after practice on Friday. “We’ve done it in the regular season. And we’ve been in every game that we lost [against them] so we know that we’re a good matchup against these guys and we’ve got a lot of confidence in ourselves.”

The Pelicans won 1-of-4 against the Warriors in the regular season. The one win was without DeMarcus Cousins.

Without Cousins, Davis has been playing out of his mind. And enough to pull off the upset.

If Davis keeps this up against Golden State, the PeliCATS can and will upset the Warriors because who is going to guard him? Draymond? Nope. Durant? Nope.

7 Comments for Can the Pelicans get the upset tonight? Tune in and see.