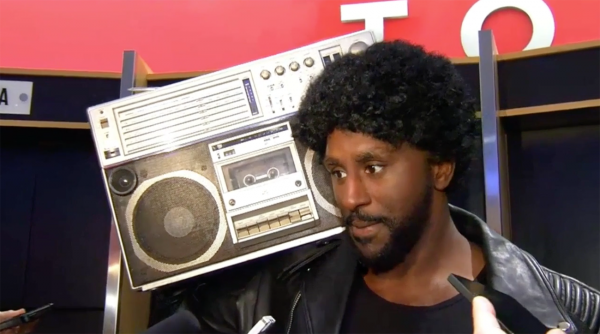 After posting 3 points, 7 rebounds and 3 assists in a 3-point win over the Jamal Murray‘s Nuggets (who has still failed to make a field goal in his young NBA career), Patrick Patterson did his entire postgame interview in costume.

The Suns fell to the Clippers but former Wildcats still managed to fill the stat sheet.  Brandon Knight led the Suns in scoring (18), Eric Bledsoe led the team in rebounds (8), and Tyler Ulis led the team in assists (6).  Ulis had a fantastic first quarter off the bench, dishing out five assists in seven minutes.  The best was this steal that led to a three-pointer in transition.

Tyler Ulis with the steal and leads the break leading to a made 3. #BBN #Suns pic.twitter.com/fa6v9ruJI5

Ulis only scored 4 points, but this beautiful bucket came just before the buzzer at the end of the third quarter.  Even though we should be used to seeing stuff like this, watching the little guy do work against the NBA’s bigs continues to amaze me.

Tyler Ulis with a fabulous up and under to beat the 3rd qtr buzzer.#BBN #Suns pic.twitter.com/7KEgJ6nhjQ

As I mentioned in today’s Top 10, Boogie broke the Kings’ franchise record for double-doubles with a 14-point 12-rebound performance.  Skal Labissiere did not play in the loss and Willie Cauley-Stein was held scoreless in 12 minutes of action.