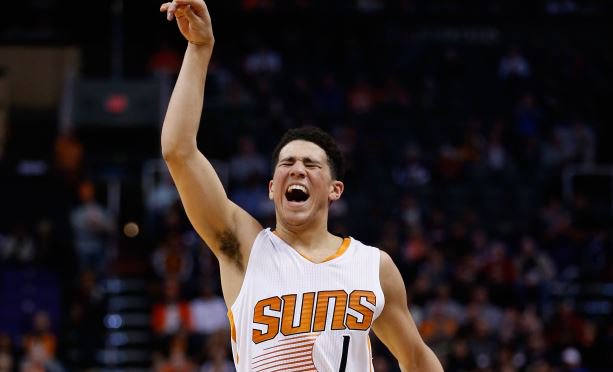 In the madness of Monday morning news, we missed the opportunity to tell you that Devin Booker is on a heater.

After posting a career-high 38 points on Friday night, he one-upped that, quite literally.  Last night Booker dropped 39 to become the youngest player in NBA history to record back-to-back games of 38 points or more.  The last two games bumped him up to 23 points per game, tied for 12th in the NBA in scoring.

Check out highlights from the best night of his young career.

Unfortunately, Booker’s Suns fell to Julius Randle’s Lakers 119-108.  Randle posted 18 points, 5 rebounds, and 4 assists, including an assist the gave the Lakers the lead for good.  He also did this:

Julius has a clear path to the basket and throws down the one-handed slam #LakeShow (ðŸ“º: @SpectrumSN & @spectdeportes) pic.twitter.com/YQmUDc5NdZ

In action from tonight, John Wall just broke the Washington Wizards’ all-time assist record. Assist No. 3,823 came in only his seventh season, surpassing Wes Unseld’s record on this play:

Unfortunately, Wall’s night ended on a low.  He was ejected from the game with 33 seconds remaining and a five-point deficit.  Michael Kidd-Gilchrist also had his night end sooner than expected.  He was a perfect 4-for-4 from the field with 13 points when he left the game in the third quarter with back soreness.