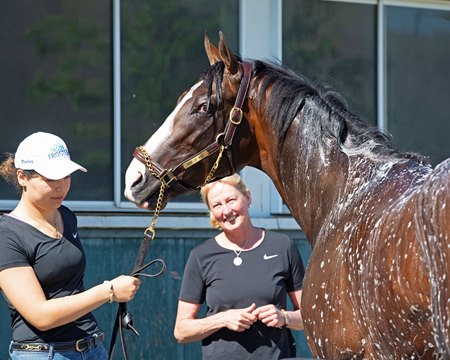 War of Will – image via Bloodhorse

Since the 3yo American classics became generally accepted as the Triple Crown around 1930, 11 horses have failed to win the Kentucky Derby prior to emerging victorious in both the Preakness and Belmont Stakes.  War of Will will try to become the newest member of that exclusive club on Saturday, but that’s far from the only story over the 3 days of racing that NYRA has dubbed the Belmont Stakes Racing Festival.  Aside from the Belmont itself, there are 7 other grade 1 races on the Saturday card and 18 stakes races total spread amongst the Thursday, Friday, and Saturday cards.  In this age of blockbuster racing days with stakes loaded cards, Belmont day has arguably become the second best racing day of the year behind only Breeders’ Cup Saturday.  Here is a sample of the scintillating stakes action that lies ahead:

Rushing Fall is just a neck shy of perfection in 8 lifetime starts.  She broke her maiden at first asking going a mile over the Belmont lawn and is 3 for 3 overall at the distance.  The daughter of More Than Ready holds a decided pace advantage in this spot as well, making her one of the heavier favorites on the day.  Brad Cox has done a tremendous training job getting Beau Recall into top form since she transferred into his barn late last year.  Her victory in the Distaff Turf Mile on Derby day was eye catching as she came from dead last to pass the entire field in the last half mile.  The question for the Irish-bred filly is will anyone push Rushing Fall hard enough on the front end to leave her vulnerable late?

A short field of older fillies and mares going 8 1/2 furlongs will see two contenders take all the money.  Midnight Bisou spent a good chunk of last year chasing 3yo filly champion Monomoy Girl and has gone unbeaten this term with that foe confined mostly to the farm thus far this year.  The Steve Asmussen trainee will look to pair up back-to-back grade 1 wins following her narrow victory over Escape Clause in the Apple Blossom.  Second choice on the morning line, Come Dancing rates as the top selection.  With bullets littered across her workout line, she should be able to dictate a comfortable pace from the rail draw and hold enough in reserve to withstand the late charging Escape Clause and Midnight Bisou.

The aptly named World of Trouble will be exactly that for his rivals in this 3/4 mile turf dash.  The owner of six straight triple digit Beyer speed figures and graded stakes victories on both grass and the main track, the son of Kantharos appears to hold a distinct pace advantage once again in this spot.  Peter Miller saddles two for this affair, and if he decides to send either Belvoir Bay or Om on a suicide mission against World of Trouble, it could set things up for their stablemate as well as late runners Disco Partner and Undrafted.  It’s also likely that the Jason Servis charge is simply too good regardless of what gets thrown at him early.

Serengeti Empress rebounded from a bleeding episode in New Orleans to run away with the Kentucky Oaks when every one of the other speed horses allowed her to get away cleanly and unchallenged.  That scenario seems incredibly unlikely to reproduce itself in this forum.  The presence of Cookie Dough, Fancy Dress Party, Guarana, and Ce Ce seems to guarantee some company for the Oaks winner on the front end and leads to the expectation of a tepid pace.  Figuring out who might emerge from the melee up front, or who can effectively rate from off the pace to pick up the pieces is the difficult part of this puzzle.  Bell’s the One and Queen of Beas both exit the Eight Belles, where Break Even just ran away with the show.  Both fillies are proven at the mile distance and prefer closing or stalking type trips, which they should absolutely fall into in this field.  Either could upset at long odds.

Favoritism will likely land with Mind Control in this top level extended sprint for sophomores.  He is already a grade 1 winner at the distance, having taken the Hopeful at Saratoga last summer.  Coupling that performance with his Bay Shore victory in April gives him easily the strongest hand in the field at the 7 furlong distance.  Bob Baffert sends out Much Better to challenge once again.  He set the pace in the Bay Shore prior to succumbing late and then flopped in the slop in the Gold Fever.  The Pioneerof the Nile colt has posted strong works at Churchill in the interim, and Baffert cranks out winners at a 39% rate when removing the shades.  Chad Brown holds a strong hand with the duo of Complexity and Honest Mischief.  Complexity is the second grade 1 winner in the field, having taken the Champagne over this surface last fall over Code of Honor.  While that effort places him squarely in the mix, his fitness will certainly be challenged in his first race back since a relative non-effort in the Breeders’ Cup.  The regally bred Honest Mischief caught the eye with a devastating eight length maiden victory on opening weekend at Keeneland.  While the rail draw does him no favors here, he is certainly eligible to make another big leap forward in just his third start.

An accomplished field of 9 older horses will take to the post at 4:45 on Saturday in the 126th running of the Met Mile.  If you only watch one race at Belmont this weekend, make sure this is this one.  The field includes 5 grade 1 winners and the earners of more than $25 million in purse money.  The one-turn mile is often the great equalizer pitting route horses cutting back in distance against sprinters challenging the limits of their stamina.  This rendition is no exception with the likes of back-to-back Dubai World Cup winner Thunder Snow and McKinzie, also a multiple grade 1 winner around two turns, squaring off against grade 1 winning sprinters Mitole and Promises Fulfilled along with proven milers Coal Front, Firenze Fire, and Prince Lucky.  McKinzie and Mitole will likely vie for favoritism and that makes perfect sense, but this field is just too good to accept a short price on anyone.  At 12/1 on the morning line, Prince Lucky may offer the greatest wagering value.  Draw a line through his no-show in the sloppy Westchester, and his two open length one-turn mile victories at Gulfstream fit right in with most of this field.  Prior to those conquests, he just got up in the Easy Goer on last year’s Belmont Stakes undercard.  Johnny V. returns to the saddle, having piloted the gelding to his 3 best performances.

Raging Bull, Robert Bruce, Qurbaan, Olympico, and Channel Maker can all win this race as they have traded punches in a dreadful male turf division the last two years, but after a year on the sidelines Bricks and Mortar has emerged as the unquestioned leader of this division in 2019.  Until another horse turns that rising tide, the son of Giant’s Causeway is the horse to beat any time he faces the starter.

If a horse not named War of Will or Tacitus wins this race, I cannot possibly predict who it might be.  Truth be told, this is a very mediocre field for the third leg of the Triple Crown.  The two favorites stand head and shoulders above the rest in terms of accomplishments.  They have 5 graded stakes victories between the two of them.  The other 8 horses in the field have 1.  There does not appear to be much pace in the race, and War of Will figures to get first run on Tacitus – giving him a tactical advantage.  Tacitus may hold the edge when it comes to pedigree.  His sire Tapit has produced 3 Belmont winners since 2014.  Pace versus pedigree should make for an interesting match race in the 151st running of the Belmont Stakes.

1 Comment for War of Will Seeks Classic Double at Belmont