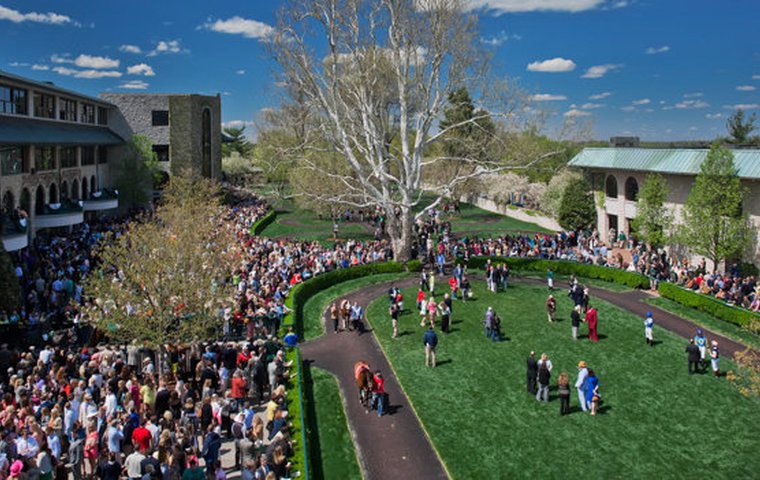 With considerable precipitation in the forecast for both Friday and Saturday, track conditions are likely to be a determining factor in both field sizes and race outcomes as the Keeneland meet begins to wind down this weekend.  Off-tracks create opportunities and hopefully we can identify a few:

Brad Cox has been no stranger to the Keeneland winner’s circle this meet with 5 wins from 17 starts, and Hoppa sure gives the look of another live one in this spot.  The Don Alberto homebred by Uncle Mo out of a Tale of the Cat mare should relish a wet surface.  Her local morning breezes have been a model of consistency, and the :46 and 2 half-mile drill last Wednesday indicates her readiness for this debut appointment.  Florent Geroux has been a go-to rider for the Cox barn in recent years, and that duo will look to build upon their 32% win clip at this venue.  Sinwaan has the benefit of a race under her belt for Kiaran McLaughlin and should improve markedly in her second afternoon appearance.  The 3rd race may give some indication of her ability as Royal Charlotte, winner of Sinwaan’s debut contest, tries winners for the first time.

Blue Prize is the class of this field and deserving morning line favorite.  She is also extremely vulnerable in her first trip to the post since filling out the superfecta in the Breeders’ Cup Distaff.  Trainer Ignacio Correas is 0 for 10 at the meet and only winning at an 8% clip for the year.  The 6yo Pure Prize mare’s worst performance last year came in her first start of the year off of a similar layoff to this one.  Finally, she is only 1 for 4 on wet tracks and does not fire her best shot on the off going.  While nearly anyone else in the field appears capable of an upset on their best day, Electric Forest and Golden Award offer the most intrigue.  Electric Forest overcame a terrible start to earn runner-up honors in the grade 3 Rampart over a sloppy surface at Gulfstream.  Her sire and dam both frolicked over wet race tracks, and with only 4 lifetime starts to her name the 4yo filly possesses ample room for improvement.  Golden Award has shown improvement in each of her 3 straight wins for Bill Mott.  She totes a bullet breeze at Payson Park in preparation for her stakes debut and may well be up for the challenge.

If this stays on the grass as scheduled, Lord Wimborne is one to keep an eye on at 15/1 on the morning line.  He is making his stateside debut for top notch connections after three progressive outings over the all weather track at Dundalk in Ireland.  The Canford Cliffs gelding has trained well for Mark Casse and is certainly qualified to improve over a natural surface with some expected give in the ground.

Soap Bubble followed up a second place effort in his first try over a sloppy race track at the Fair Grounds with a winning one to break through the maiden ranks on New Year’s Eve.  His pedigree and that prior off-track experience should serve him well in this spot.  While he regressed in his turf debut back in February, he bounced back to form to round out the trifecta behind a next-out winner back on the main track just 18 days later.  Corey Lanerie gets back aboard for the first time since piloting the colt through a troubled trip when just a neck shy of Hawaiian Noises (who led the Grade 3 Lexington through the opening half mile before fading late) over this surface last fall.  A six week respite should serve this son of Twirling Candy well, and he is a solid value play if his 10/1 morning line price holds.  Sloppy tracks often lead to scratch reduced fields, meaning Bump Bailey is likely to draw in off the also eligible list.  The Fed Biz colt blazed through scorching fractions over an off-track to a clear victory in his Santa Anita debut for Peter Miller, and a repeat of that performance over similar track conditions here looks highly plausible to say the least.

Zulu Alpha has repaid owner Michael Hui several times over since being claimed for $80,000 last September.  He won the Grade 3 Sycamore over good ground in his first start off the claim here last fall.  A poor effort in the Grade 2 Fort Lauderdale followed, but he has since reeled off two straight graded stakes wins for Mike Maker in south Florida, notably producing a 102 Beyer over a Gulfstream course labeled “yielding” in the William McKnight at this marathon distance.  The short break since his Mac Diarmada victory should serve him well.  Jose Ortiz takes the reins from brother Irad on this short-priced and dependable favorite.  The remainder of the field is littered with also-rans from the Street Cry gelding’s latest triumphs – any of whom could pick up the pieces – but make no mistake, this is his race to lose.

The Brian House name is an unfamiliar one, but his stats clearly show that he has won with 4 of his 6 first time starters this year.  The very capable Jimmy Graham looks to make # 9 the Winning Number and light up the tote board with a colt whose pedigree screams mud loving beast.

Best of luck to all who choose to brave the nasty spring time Kentucky weather and venture out this weekend.