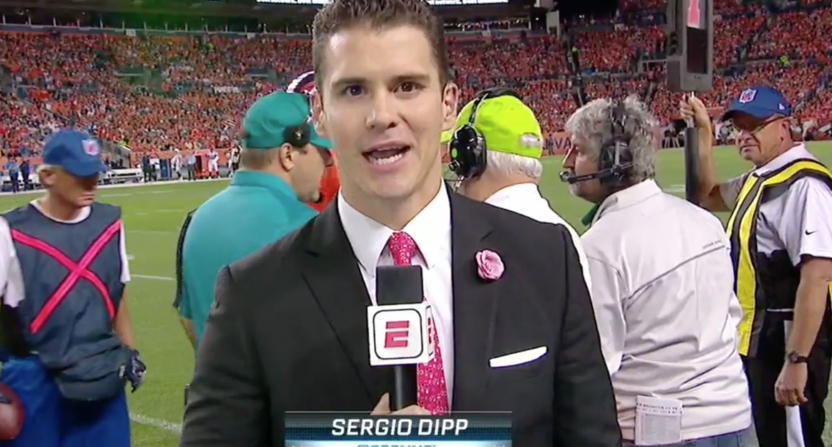 Last night as I was trying to doze off to the sweet sounds of Beth Moins (she did well) and Rex Ryan (he did not) on the second of two Monday Night Football broadcasts, I, like everyone else watching at home, was introduced to the legend that is Sergio Dipp.

In case you missed it, Dipp was the sideline reporter for the Broncos-Chargers game and his first live report from the field immediately went viral.

Take a look and you’ll know why:

Sergio Dipp for every game pic.twitter.com/ZhRJppvEAU

The internet destroyed Dipp — search his name; it’s good — which led to a very dramatic follow-up video from Dipp in his hotel room:

ESPN now has a decision on its hands as to what it should do with Dipp moving forward, but I say he should do every MNF game. Fans were craving more Dipp last night.

Now for some UK stuff…

John Calipari was up early to see Simi Shittu.

UK target Simi Shittu hosted 37 coaches at an open gym at Vermont Academy at 6:00 am this morning, and John Calipari was among those in attendance. Shittu does not have a confirmed offer from Kentucky, but he is high on Calipari’s board in the Class of 2018. Shittu has named Kentucky as one of the schools pursuing him the hardest at this stage in his recruitment.

Eddie Gran to talk about the offense this afternoon.

We’ll get some football updates out of Eddie Gran following Tuesday’s practice, per usual. He’ll likely be talking quarterbacks, Benny Snell’s health and the Wildcat formation. Remember, after Saturday’s game, Gran said, “We might not ever run the Wildcat again. Some years it’s good for you, some years it’s not.”

We’ll see if his attitude has changed after a couple days to digest the EKU game.

I don’t think Matt Elam is inviting the SEC Network crew over for dinner anytime soon.

Due to some scheduling conflicts, the KSR Football Podcast will have to wait another day before it hits the internet. Normally we record it on Tuesdays, but this week’s show is on hold until tomorrow morning. We’ll release immediately.

Also from the KSR podcast world, Matt and I are recording the third edition of our Free Money Podcast tomorrow afternoon. Plan accordingly.

The line for Kentucky-South Carolina is all over the place.

KSR radio on the way.

More Matt Jones and Ryan Lemond coming up at 10 am…

18 Comments for Today on KSR: We want more Sergio Dipp!