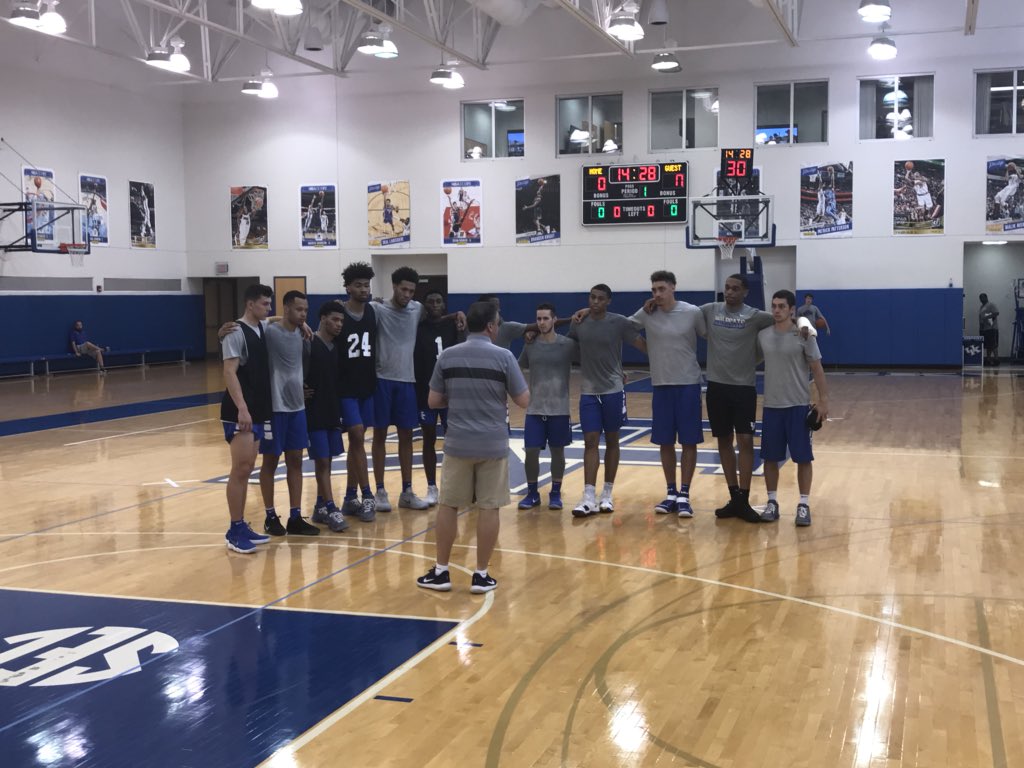 Welcome to another beautiful day of Kentucky-Sports-Radio-dot-com content to take up most of your time while you should be working. It has been a slow time for fans of Kentucky basketball and football, but things are picking up as we count down the days to football camp and the Cats’ trip to the Bahamas. Both will be here before you know it.

Here’s what is going on in the world right now and we’ll have plenty more coming your way throughout the rest of the day and beyond.

Also, you look good. Have you been eating right and working out? It’s paying off. Keep it up!

John Calipari got his team together for its first practice of the year on Wednesday. The team went for 90 minutes and it has Calipari “feeling good,” he said afterward.

We just finished our first practice.

CoachCal.com shared a full written report of the practice Wednesday night, in which TJ Beisner gave a brief description of each of the freshmen, as well as the practice as a whole. You can read that here. Beisner and Calipari both talked about the staff’s emphasis on teaching the team how to practice as the main theme of Day 1.

The team will hold its second practice today.

Stanford’s coach opened up about Reid Travis transferring to UK.

Interesting comments from Stanford head coach Jerod Haase, who said Travis’ transfer is like “being penalized a scholarship” because it happened so late in the year. However, he also said he knew it was a possibility he would lose Travis because Travis said all along he planned to test the NBA draft waters. Read all Haase had to say here.

Earlier in the week, it was a Louisville fan and his “John Calipari hates puppies!” sign on the TODAY Show. This morning, we got three lovely ladies wearing UK blue.

Nick Roush is getting married this weekend.

Hard to believe, right? Our young KSRCollege.com intern is all grown up and marrying the woman of his dreams this Saturday. He’ll be away from his work obligations the next few days as he works hard to keep her from changing her mind before it is too late. Don’t mess this up, Nick.

The KSR bowling team is still bad at bowling.

It pains me to report that, after climbing up a spot from last place to second-to-last place this past week, the KSR bowling team lost Wednesday night to fall back to dead last. Sadly, we played the team that was in last place and couldn’t get it done, therefore we’re back to the bottom of the standings. 40th out of 40 in our own damn league.

Any Westworld fans out there?

If so, can you tell me what I just watched? I’m all caught up after watching the season finale and I don’t really know what’s going on. Has the show become a dud? Discuss.

The “Ask Anything Mailbox” returns tonight.

After a two-week break for my vacation, we’ll get personal again tonight with the third edition of the “Ask Anything Mailbox.” Send your questions to me on Twitter at @DrewFranklinKSR or to the e-mail account at [email protected]

Here’s where you can find KSR next week.

The band gets back together next week with two stops around the state:

To see the entire tour schedule, go ahead and click right here.

Today’s radio show is in the soft and comforting hands of Kyle Tucker. The former SEC Country star will guest host the two hours to talk UK basketball and football while Matt Jones soaks up the sun in lovely Minneapolis, Minnesota, on vacation.