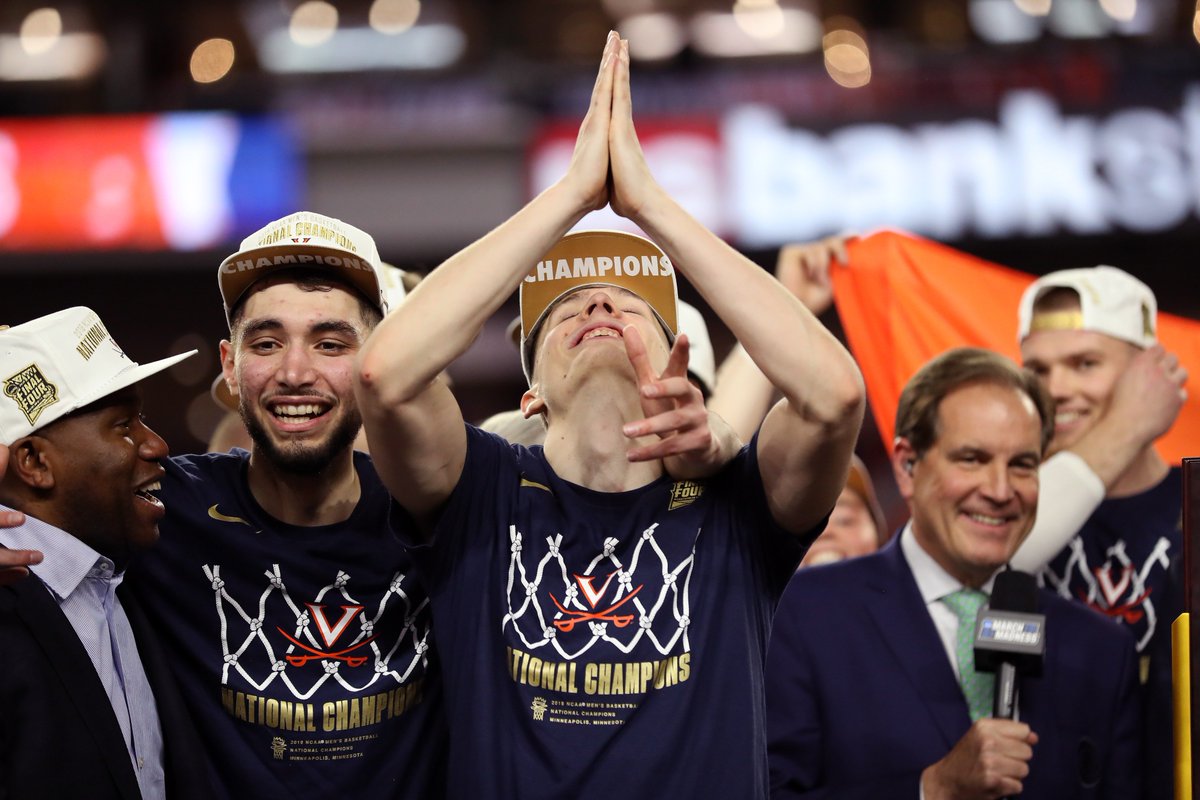 Today’s going to be a two-pot of coffee kind of day, thanks to the University of Virginia. At least they made it worth our while.

Billed as a snooze fest, after a slow start the National Championship game turned into an instant classic. Every time you thought Virginia was ready to run away with the game, Texas Tech made a run to retake the lead. The Red Raiders had a three-point lead with less than 20 seconds remaining, until De’Andre Hunter’s corner three forced overtime.

Everybody loves an overtime National Title, right? After all, it was the first since Memphis-Kansas in 2008. Last night’s was actually not good. The basketball was fine enough, but the Cavaliers were in control for almost the entire extra period, one that made the game go to almost midnight. Please, no more 9:20 ET tip-offs. I couldn’t even stay up for One Shining Moment.

Tyler Herro makes a nice cameo, but nobody is featured more than Elite Eight participant Zion Williamson. Drew summed it up best, “Virginia with a nice cameo at the end of One Zion Moment.”

There have certainly been better One Shining Moments in the past. Darren Rovell’s rendition is not one of them.

This is what happens when you don’t start a game until 9:20pm ET #oneshiningmoment pic.twitter.com/4uml9S3SjG

Tennessee still has its Coach

What a shame. I hear Westwood is beautiful during basketball season, yet Rick Barnes decided to remain in Knoxville. The Naismith Coach of the Year became the latest coach to turn down UCLA to get a pay raise at Tennessee.

“I’m also grateful to our university leadership, which stepped up to show Rick how much he is valued and appreciated,” AD Phillip Fulmer said in a statement. “Our commitment to basketball has never been stronger, and we’re all excited for the future as we move forward.”

Spring Practice is back in action this morning at the Joe Craft Football Training Facility. The Cats only have two more to prepare for Friday’s Blue/White Game.

Skyline Bets > Every Other Bet

Mike Edwards unofficially ran a 4.5 at yesterday’s second UK Pro Day, but a few NFL scouts’ stopwatches clocked him at 4.44 in the 40-yard dash. That was his ultimate goal, if not to move up draft boards, to win Skyline from Lonnie Johnson.

The Journey has ended, but the KyWildcatsTV crew is still at work. They’re recapping the season by profiling each player, starting with the senior, Reid Travis.

Our season wouldn’t have been near what it was without @2ReidTravis2. He came here to play with the best and compete against the best. In the process he became a better player and we became one of those teams.

It hurt typing those words. Now that basketball is over, we must face it head on. Or we could just ignore it a little longer. Derby season anyone?

Rex Chapman will be on your iHeart Radio airwaves this morning with Ryan Lemond and Drew Franklin from 10-12. Don’t miss it.

18 Comments for Today on KSR: One Sleepy Moment