Stoops on the SEC Teleconference

Around lunchtime, Mark Stoops will answer questions on the SEC Coaches Teleconference. That could mean we hear his thoughts about the team’s performance vs. Toledo or the upcoming game vs. Eastern Michigan. Judging by last week, it could also mean he’s asked about his brother’s gig in the XFL or his memories of playing college football. Check the site later on to find out.

Brad White and the defense will talk to reporters after practice

Last night, Eddie Gran got to brag about his wide receivers and Landon Young and Terry Wilson got to praise the offensive line. Tonight, Brad White and the defense will take their turns in front of the mics. Until then, here are Gran’s full remarks and a reminder that you can find all of the post-practice interviews on KSR’s YouTube page.

On Saturday, UK will honor all active and reserve members of the armed forces along with police, firefighters and first responders on Heroes’ Day. One complimentary ticket will be available to each hero online through GovX (for more details, click here). It’s also Scout Day and High School Band Day, which is another reminder that junior running back AJ Rose is an Eagle Scout. I’m sure we’ll hear more about that as the week goes on.

The Wildcat Marching Band named an SEC “Stud” of the Week

The band’s tribute to Jared Lorenzen at halftime went viral on Saturday and drew kudos from FanBuzz’s John Duffley in his breakdown of the SEC’s Best and Worst Performers of Week 1.

A GoFundMe has been set up for Cullan Brown

Last week, UK sophomore men’s golfer Cullan Brown was diagnosed with osteosarcoma, an extremely rare type of bone cancer. He has withdrawn from school and will begin chemotherapy this week. The news comes following a promising year for Brown. The Eddyville native was given All-SEC Freshman honors last season and in July, competed in the Barbasol Championship PGA Tour event in Lexington, in which he shot ten-under and finished in the top 50.

A GoFundMe has been set up to help Cullan and the Browns during this difficult time. To learn more and donate, please click here. #BFB

Did you get your tickets to Kentucky vs. Utah in #BBNVegas yesterday afternoon? If not, click here for details on how you can secure your seats to the Neon Hoops Showcase, the first game in Kentucky’s Vegas doubleheader. KSR is partnering with bdG Sports for the event, and we’ve got a lot of fun contests and promotions planned, so be sure to follow @BBNLasVegas on Twitter and check BBNVegas.com for updates.

The Panthers’ 38-30 upset of the Vols in Neyland is still funny, especially when you find out they rented a mobile billboard to drive around Atlanta showing the highlights. (WARNING: the Tennessee fan filming this video uses very foul language.)

Driving around Atlanta today while working and minding my own business and BOOM my day is ruined pic.twitter.com/ABchyLQiDw

TV Rec of the Week: The Righteous Gemstones

HBO’s comedy about a televangelist family is the latest binge at the KSR South Compound. John Goodman, Danny McBride, and Adam DeVine are absolutely fantastic as the famous Gemstone family, but my favorite character may be Baby Billy, played by Walter Goggins, aka Boyd Crowder from Justified. There have only been three episodes so far, so borrow your friend’s HBOGo password and get to it.

Meet Bonnie, who likes to eat her treats while the Cats eat the Cards: 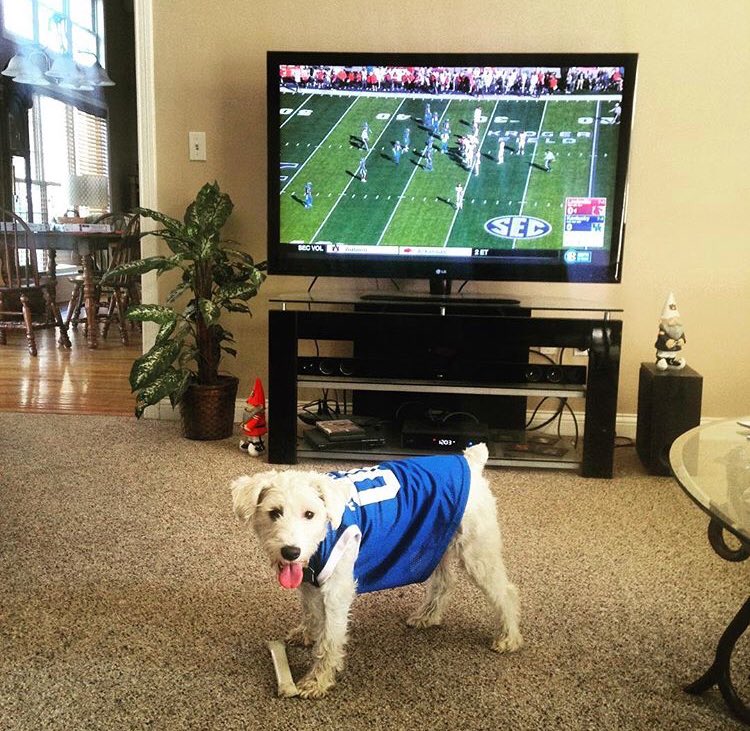 Matt’s giving the mic to Ryan for Trivia Night, so study up on Hootie & the Blowfish’s catalogue and Rodney’s on Broadway’s menu if you’re headed to KSBar.

Tune in to see which mystery location they picked for today’s show.