Good morning, friends. How are you this morning? Good, good. I’m glad you got that taken care of. Now suck down that cup of coffee you’re holding and read what’s ahead here on KSR. It’s slow news season, but as I look out over the imaginary office, I see some good stuff in the works. It looks like Luckett has some football analytics coming your way, Jack is typing away on a Peach Jam recap and more. We’ll have lots of fun together.

The craziest football fan base in the SEC will litter the halls of the Hyatt Regency Birmingham-Wynfrey Hotel today in hopes of getting a whiff of Nick Saban’s scent. Saban is one of the the four coaches scheduled to take the podium during Wednesday’s fun at SEC Media Days, along with Chad Morris (Arkansas), Joe Moorhead (Mississippi State) and Will Muschamp (South Carolina).

It is already looking wild in there: 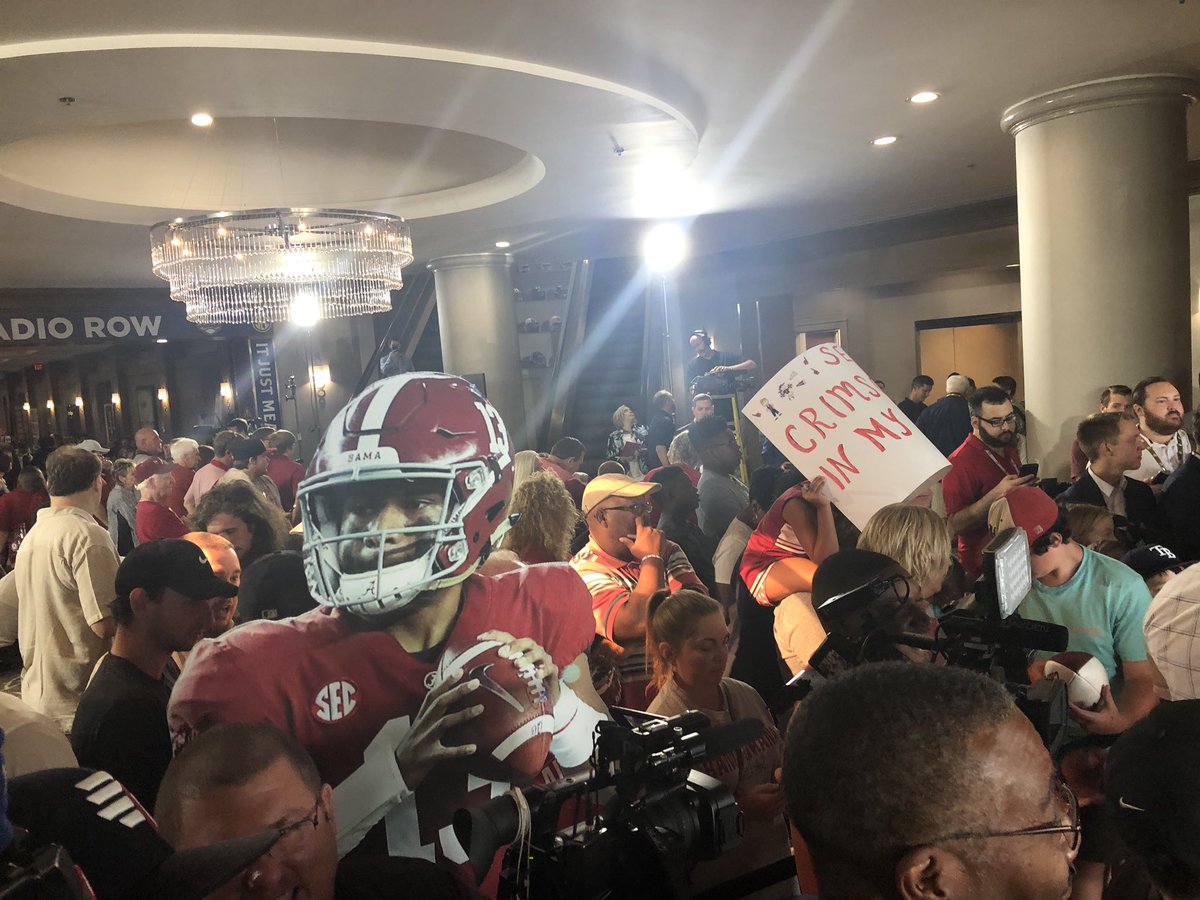 You will have to wait one more day to hear from Mark Stoops, Lynn Bowden, Kash Daniel and Logan Stenberg. Those guys are due up tomorrow.

Tee times are out for the Barbasol Championship.

Going to the Barbasol Championship? (You should.) If so, the tee times for Thursday and Friday may be of interest to you. You can see them here.

I will be out there all day today for the pro-am and there will be plenty of Barbasol content here on Kentucky-Sports-Radio-dot-com.

On Tuesday, KSR headquarters was hit with the unexpected news that Matt Jones will take a leave of absence from Hey Kentucky! until he makes a decision on his political future. The show’s station, WLEX-18, made the call, which Matt said (via Twitter) he did not agree with.

In his first public comments outside of Twitter, Matt went on Terry Meiners’ radio show in Louisville shortly after the news to give his thoughts on the matter:

Listen to “Matt Jones on stepping away from “Hey Kentucky!”” on Spreaker.

He will have even more to say on today’s KSR.

No Wednesday night trivia at KSBar and Grille tonight.

I repeat: No Wednesday night trivia at KSBar and Grille tonight.

You can still get in the upcoming KSR golf scrambles.

We still have room for a couple more teams in our golf scrambles in Somerset (Mon. July 22) and Louisville (Fri. Aug 9). If you are interested in playing, more details and team registration can be found via the two links below:

The KSR radio show will broadcast live from the course before both tournaments.

Today’s show will be broadcast live from Pikeville.

Matt Jones and Ryan Lemond are at Buffalo Wild Wings in Pikeville for the eighth stop on our Blue Lights Across The Bluegrass Summer Tour. Get out there to meet the guys and hear the show in person, or tune in by radio from wherever you are.

Tomorrow the show will be in Ashland at Blazer’s Restaurant and Bakery. On Friday we are back in Lexington for The Tournament out at Frederick Douglass High School.