Kentucky is falling further and further behind other states in the sports gambling gold rush.

When West Virginia was the first neighbor to act, fine. It’s basically the wild, wild west there anyway. Then Tennessee passed a measure to legalize sports gambling. Last week Indiana joined the fold. If you thought it felt bad to see Hoosiers twist the knife, now Iowa, IOWA has passed sports gambling legislation. They are the 11th state to join the movement. As many as five more could make the move before the end of 2019. Now the golden corn won’t be the state’s most valuable good.

As the Commonwealth sits idly by and lets valuable tax-based income flow to neighboring states, there are a few other things happening in the Kentucky sports world.

Kentucky’s 2020 recruiting momentum carried over into the current class. Following Gunnar Hoak’s departure, Mark Stoops found quality quarterback depth in the transfer portal. Sawyer Smith leaves Troy for Lexington after helping the Trojans to a 10-win season in 2018.A duel-threat weapon, Smith brings experience invaluable experience to the quarterback room. I did some deep-diving into Smith’s game yesterday and here’s what I found.

What’s going on with Jaden McDaniels?

As Kentucky appeared to be gaining all the momentum, last night Evan Daniels switched his Crystal Ball pick from Kentucky to “unknown.” McDaniels also told the recruiting insider that he has in fact not signed a letter of intent. The once incredibly quiet recruitment has created uncertainty. Jack Pilgrim will try to striaghten out the fact from fiction in today’s insider notes.

Who will win the Zion Williamson Sweepstakes?

A few teams tanked all season long to earn the chance to select Zion Williamson with the top pick in the 2019 NBA Draft. Tonight the Knicks, Cavs and Suns will learn if they’ve earned their reward at the NBA Draft Lottery in Chicago. It airs at 8:30 p.m. ET on ESPN. A look at the odds for each team for each pick: 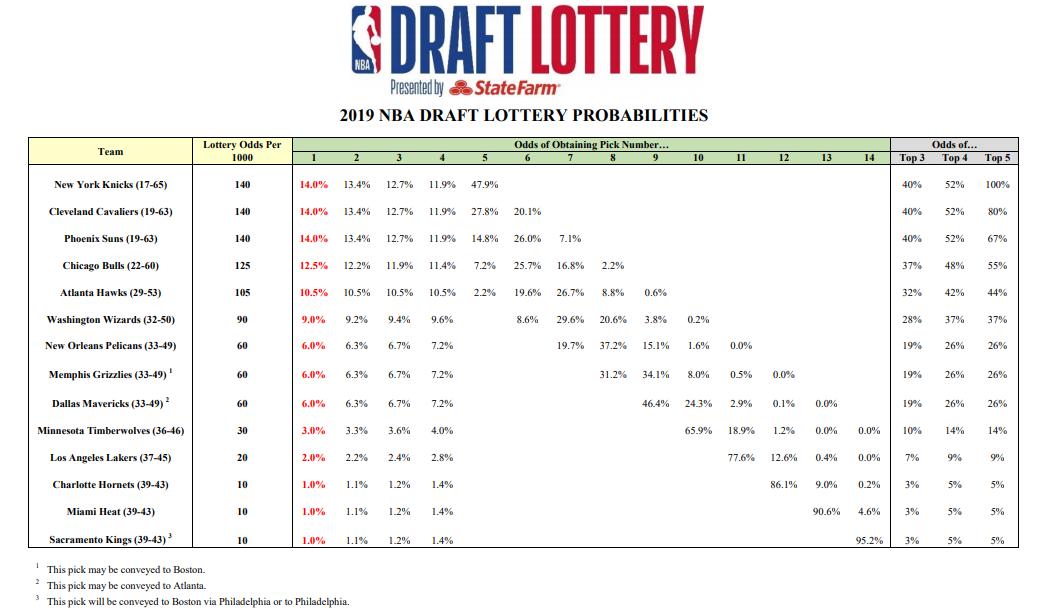 Some might feel bad for the long-suffering Knicks fans. Not me. Let’s get Devin Booker some help STAT.

Following the Mad Queen’s bonfire at King’s Landing, Odds Shark has updated their final odds for who will win the Game of Thrones. For some reason, Bran is even money. If that happens, I don’t know what I’ll do. Rioting in the streets is not out of the question.

While you’re at it, listen to the latest episode of Kentucky Thrones Radio. T.J. loved the episode and I hated it, creating the perfect combination to help you find relief following the show’s penultimate episode.

Justin Thomas out at the PGA

This year the PGA Championship has been moved from August to May. The switch will benefit the sport in general, but not Justin Thomas. A wrist injury will prevent the Louisville native from playing at Bethpage Black this weekend. The 2017 PGA Champion, it’s a shame we won’t get to see one of Kentucky’s finest compete for the title.

The Kentucky football team has already successfully recruited some of the best athletes in the state. One that’s still uncommitted is North Hardin defensive tackle Octavious Oxendine. This guy isn’t just a big body, he’s an incredible athlete. 310 pounds can’t keep him on the ground.

No stretch needed— in jeans— can still throw one down!! 310 lb Athlete!!! @octaviousoxend1 pic.twitter.com/wz6kTKoaIZ

Tonight the Bat Cats will host the Michigan Wolverines in the final non-conference game of the 2019 season. They’ll take tomorrow off before opening the final series of the season Thursday against Vanderbilt. First pitch at Kentucky Proud Park is set for 7:00 p.m. ET.

Matt Jones and Drew Franklin are back on the air in one hour. Don’t go anywhere.

11 Comments for Today on KSR: Another state will legalize sports gambling