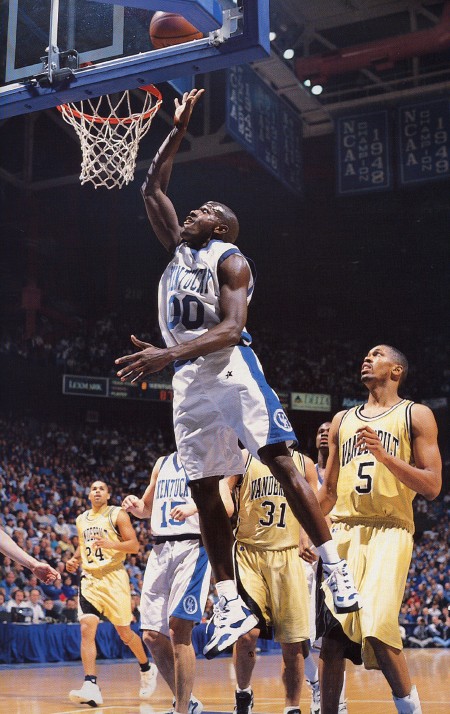 Finally! After years and years of debating and waiting, UK announced today that it will retire Tony Delk’s jersey in Rupp Arena. Delk is set to become the 43rd jersey in the rafters on February 21 when the Cats play host to Bruce Pearl and Auburn.

In case you’ve forgotten — which would be criminal — Delk was the Most Outstanding Player of the Final Four and the Midwest Regional in UK’s run to the 1996 title. He also earned first-team All-America and SEC Player of the Year honors that season after leading the Cats in scoring three straight years. He currently stands as UK’s career leader in three-pointers with 283, while ranking second in career steals with 201 and fifth in scoring at 1,890 points.

Delk’s ascendance to the rafters is long overdue and it will make for an emotional night in Rupp for one of UK’s all-time greats. That double-zero will look great above Cawood’s Court and the sea of blue, where it belongs.

Other news from the day…

According to one FootballRumorMill.com, a “well-placed source” indicates our own Mark Stoops could be a backup candidate for the Wolverines head coaching job. Michigan is looking for someone who can recruit in Ohio and Mark Stoops has shown he can get it done on the recruiting trail and compete with the big dogs in his home state.

But first, Michigan is seeking Les Miles or Jim Harbaugh for the job. Reports say Miles is interested but the two sides can’t agree on the budget for a staff, while Harbaugh is waiting to finish out his NFL regular season to make any decisions on his future.

If Harbaugh is canned, and that’s very likely, you have to think he’ll take the job at his alma mater.

Two days after Harris met with Urban Meyer and Nick Saban, the nation’s No. 1 running back opened up his home to Mark Stoops, Vince Marrow and Chad Scott. Harris, who will officially visit UK this weekend, tweeted, “Glad Coach Stoops and the staff could come hangout with me and the fam #StoopsTroops.”

If we’re to believe rumors in the media room before Wednesday’s UK basketball game, the visit with Saban did not go over well with Harris’ mother. We can’t confirm the validity of that talk but keep your fingers crossed that it’s true. Alabama has made a very strong push in the recruitment and Kentucky needs any help it can get to hold on to its most important target, maybe ever.

Courtney Love and Greg Hart will transfer to UK.

Love and Hart, two former Nebraska Cornhuskers, will transfer to Kentucky for the spring semester. Love, a linebacker, is the biggest get of the two; he’s expected to compete right away once the status of his eligibility is determined. Hart is also coming in at a position of need, tight end, although CJ Conrad and Darryl Long are expected to be the future there.

Love comes from Cardinal Mooney and was a four-star prospect in the 2013 class.

Joker Phillips in the running for the Florida A&M job.

The Tallahassee Democrat is reporting Joker Phillips is among the eight finalists for the Florida A&M job. The eight candidates are being interviewed via Skype this week, and I find that to be hilarious.

But on a serious note, good luck to Joker. Florida A&M will pick up several new fans if he lands the job.

We’ll find out the status of Tyler Ulis and Devin Booker tomorrow.

No one outside of the Joe Craft Center knows if Ulis or Booker practiced on Thursday so we go to bed wondering their status for the North Carolina game. Coach Cal is scheduled to meet with the media at 2:00 tomorrow and we’ll have an answer then. Sit tight.

Friday will be full of UNC hate and game previews.

Tonight’s post is full of football news but we’ll hit the Tar Heels hard tomorrow. Check back as we break down the squad and make fun of Roy Williams throughout the day. We’ll have plenty from Coach Cal’s press conference, too.

KSR will be at Courtesy Acura in Lexington tomorrow.

And we’re giving away tickets to the UK-UNC game. Stop by 3701 Nicholasville Road to hear the show and enter the drawing.