Well it’s the summer so that means it’s time for that time honored tradition of arguing over who would you want enshrined on the peak of Black Mountain. This year however instead of determining which players were the best centers or quickest passers I’m going to look at the players who stepped up in the biggest moments.  This year’s post season saw Aaron Harrison Step up time and time again to hit game winning shots. Those plays led his teammates to celebrate the size of his anatomy in the ultimate demonstration of if you’re winning, nothing else matters. So in honor of Mr. Harrison these are my picks for the Kentucky Wildcats Mount Rushmore of Big Stones: 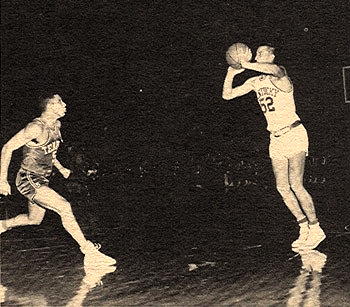 The legend who was Aaron Harrison before Aaron Harrison Sr. was even thought of. Vernon Hatton delivered several clutch moments en route to the 58 championship. First was the game against Temple in memorial that was sent to OT by Hatton’s 50-footer. They drove a golden spike into the floor to commemorate it. The two teams faced of again in the Final Four and Hatton was hero with a go ahead layup to win the game.

Sean Woods’ shot against Duke may not be remembered as fondly due to the ending of the game but it was still a clutch moment. Woods drilled the with two dudes guarding him to nearly take down the behemoth known as 92 Duke and cement the legacy of the Unforgettables. Kentucky, coming off probation, should have had no business even being in the the game so the whole team showed the had some stones. Woods taking the shot showed he had the biggest.

Patty, won’t you take down to Muhlenberg County? The homegrown kid may have not been the fastest, tallest, or most athletic but he was certainly one of the most clutch. If the Cats needed a trey-ball then you knew Sparks was going to get the look. He certainly did against Louisville and against Michigan State. Like Woods, had we won against the Spartans then Sparks’ shot would be even more celebrated than it already is. A clutch Kentuckian with some serious marbles.

In just one season Aaron has earned his place on Rushmore as one of the most clutch players in Kentucky history. How could he not with three of the biggest shots the school has seen all coming in the NCAA tournament. Even if he misses every shot he takes next season there has never been a player step up so big in the crunch time of games. Aaron  earned not only his spot in UK history but a wheelbarrow to carry himself out of Dallas.

So what do you think? Who else should be on the face of Mount Clutchmore? Scott Padgett? Brandon Knight? Epps? Brassow? Leave your four in the comment below.

41 Comments for The Mount Rushmore of Big Stones