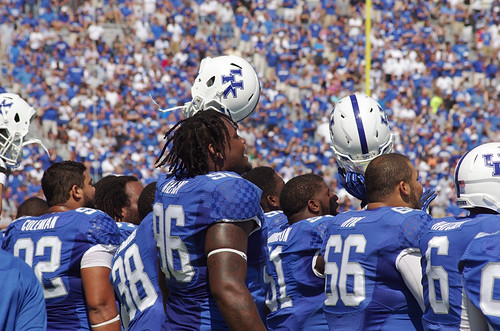 Fast start. Remember that first-quarter debacle at The Swamp in 2008, with two blocked punts? Starting with that game, Kentucky has not produced a first-quarter touchdown against the Gators. Over the last five seasons, the scores (in favor of Florida) after one quarter have been 28-0, 31-0, 14-0, 21-3 and last year’s 3-0. Since 2005, UK has held a lead over the Gators for a combined time of one minute, 37 seconds–and that came in the ’06 game. Getting a lead on that stingy UF defense will be easier said than done but if the Cats can do it, the Florida coaches may have to alter what figures to be a conservative, run-oriented gameplan with a QB going on the road to make his first-ever start.

Can UK rattle Tyler Murphy? A creative bit of defensive strategy, utilizing Jason Hatcher in a 3-4 alignment, slowed down a very potent Louisville offense for almost an entire half, by giving quarterback Teddy Bridgewater some looks that confused him. Bridgewater is superb at pre-snap reads so Kentucky could confuse him, one would think the Cats would have a chance to throw a rookie like Murphy a curve or two. It would seem logical that UK’s best chance for an upset would involve forcing a turnover or two on Florida’s side of the 50, to give the UK offense a short field to cover for points, which figure to be hard to come by against the Gator D.

Win the turnover battle. You have to go back to 2009 to find the last time UK won an SEC game in which it had at least one more turnover than it forced. And the Gators are 3-8 under Muschamp when they’ve lost the turnover margin stat.
NUMBERS GAME

–Florida loves to play power football. Since Muschamp arrived in 2011, only 10 teams have held the Gators under 125 rushing yards and UF is 2-8 in those games

–Staying out of 3rd-and-long is imperative. Florida opponents are 7/24 passing with four interceptions in situations of third down-and-seven or more to go. And the numbers last year in those situations were similar.

–Kentucky’s defense on third-down plays has been a night-and-day difference from last season. The Cats ranked sixth nationally through three games with opponents converting at a rate of 23 percent. Last year, UK ranked dead last in the nation at 53 percent. (stats courtesy of cfbstats.com)
THIS WEEK IN BIG BLUE HISTORY

Kentucky has 13 wins all-time against teams ranked in the top 10 at the time of the matchup–and two of those wins came during this time of year. In 1964, Kentucky upset #1 Ole Miss 27-21 and in ’69, the Cats stunned the eighth-ranked and Archie Manning-led Rebels 10-9. In one game, wide receiver Rick Kestner had a career-day with 185 receiving yards while in the latter, the defense played out of its mind. An offensive player having a big day and a defense being stingy would seem to be key elements to any script for a UK upset this Saturday.

2 Comments for The Leach Report