I find it hard to believe that we only have two Sundays of real football left before the pigskin retreats back into hibernation until next fall but here we are. Tomorrow will bring about the NFL conference championships and decide which two teams will be playing for the Lombardi Trophy in two weeks. On one side we have the two elite quarterbacks of the past decade in Tom Brady and Peyton Manning. Both are first ballot hall of famers and both have been in this game several times before. The AFC looks like it will be decided by which of the teams can overcome the constant injuries that have plagued them all season. My vote is for the stable of former Cats with the Broncos. On the other side you have the changing of the guard quarterbacks in Colin Kaepernick and Russell Wilson. Both guys were never even expected to be playing on the football field let alone leading the two best teams the past two seasons. Both guys look like they are going to be exactly what makes football so great and should come down to the final seconds. I can’t wait.

Who do you pick in tomorrow’s conference championships? Now on to the news and views: 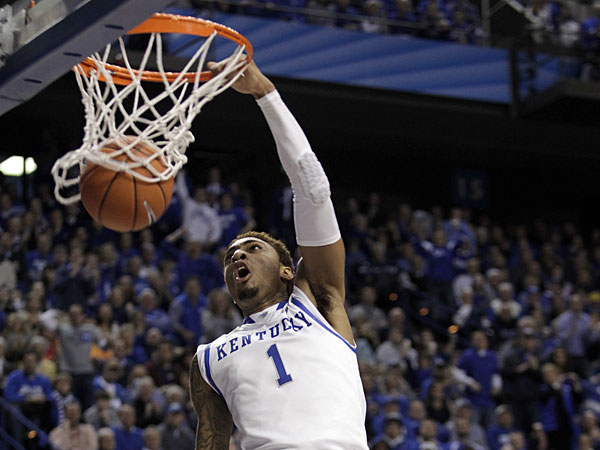 James Young Putting The Cats Up 4

The Cats took on the UT Volunteers today in Lexington and as expected it was a knock down drag out fight for the majority of the game until Kentucky finally took control. The biggest story of the game was the play of Andrew Harrison who apparently has decided to show up against our biggest rivals. After a poor showing against Arkansas, Andrew Harrison responded with his best game yet, posting a career-high 26 points, 3 assists, and zero turnovers against the Vols.  He was 7-13 from the field, including 2-3 from behind the arc and a perfect 10-10 from the free throw line. Who did the game impress most? Perhaps it was his own brother who tweeted this shortly after the game:

That’s the Andrew I know ðŸ‘Œ

-Early in the game though it was a one-on-one affair between Jarnell Stokes and Julius Randle trying to one up each other. Stokes appeared to be a rebound vacuum grabbing every ball that seemed to bounce in his direction. Julius though was a force on the offensive end as he scored the opening 7 points for the Cats, including his first 3, en route to finishing with 18. At this point you just know Randle gonna Randle.

-The Cats also got things done at the charity stripe for the first time this season as they went 23-24 from the line this afternoon for a whopping 95.8%.  You can thank the Harrison Twins, Julius Randle, and Alex Poythress for that mark.  They were the only players to go to the line today for the Cats. Let’s only have those four head to the line for the rest of the season.

-The Cats picked up a nice win over a bitter rival and now move on to face Texam A&M this Tuesday in Rupp. The Aggies dropped their first game of conference play today against Mississippi State in overtime. Without Elston Turner walking through the door the Cats should have no problem dispatching the team from College Station.

-Let us all take a moment and laugh at the Indiana Hoosiers who lost by 7 at home to Northwestern. I guess they were too tired after storming the floor celebrating a colossal win over the powerhouse known as Wisconsin.

-Shoutout to Providence for picking up a top-20 win over Creighton. Keep building that resume boys and making our win look that much better.

-You can tell it’s getting closer to March as Kansas nearly chocked and gave up a 17-point lead to Travis Ford and Oklahoma State. The Jayhawks won 80-78.

-Scroll down the page a a bit to witness John Wall keep doing his thing and posterize Andre Drummond. The red hot Wizards dropped the game after winning 5 of 7 but they are still on track for a nice playoff seed in the abysmal Eastern Conference.

–Marquis Teague got dealt to the Brooklyn Nets for some guy I’ve never heard of, Toko Shengelia. Hopefully Teague will get a chance to develop and grow once Deron Williams returns potentially Monday. Teague kind of got a bad break in Chi-Town with D. Rose being habitually injured.

-Terrence Jones has gone for an incredible 34 points tonight and there is still a lot of clock left in the game. Anthony Davis is just behind him with 31. Brandon Knight has 26. The former Cats are starting to take over the NBA.

I’ll be back tomorrow for all your Sunday Funday Cats coverage. Until then enjoy your Saturday night and bask in the warmth of yet another Cats win. The team is finally looking like they get it.

33 Comments for The Conference Championships Sunday News and Views