Stuart Scott’s name has been in the news a lot the past few days following his memorable and moving speech given at the ESPY’s earlier this week. Scott followed in the footsteps of Jimmy V by giving the kind of speech that resonates with anyone listening… the kind of speech that leaves you with goosebumps. The addition of video footage of Scott with his family with the song “Stay With Me” by Sam Smith playing in the background was enough to leave the eyes a little misty. Tomorrow also happens to be Stuart Scott’s 48th birthday.

Scott has been battling cancer for over 7 years now and despite everything he has been going through, has still remained a fixture on Sports Center. Scott has committed himself to continuing to live life, and not letting his illness keep him from doing the things that he loves– the things that keep him going. In perhaps the most poignant and haunting part of his speech, Scott said “When you die that does not mean that you lose to cancer. You beat cancer by how you live, why you live and the manner in which you live.”

Word on the street was that Kentucky football was in for a potentially big weekend filled with a YAHTZEE or two, and so far the news has not disappointed. Kentucky picked up a huge commitment earlier this evening when 4-star Florida Safety Marcus Walker made it official (for the second time) that he was going to be a Kentucky Wildcat. Walker had previously committed to Kentucky before re-opening his recruitment. After a great visit with the likes of Damien Harris and other big-time Kentucky targets in Lexington this weekend, Walker pledged to be a Cat again. Walker chose Kentucky over offers from Arkansas, Michigan State, Tennessee and UCF.

The good news just kept coming as the Wildcats topped off the night with a commitment from 3-star CB Kei Beckham. Beckham hails from the state of Ohio and chose Kentucky over Louisville and West Virginia.

Walker and Beckham were the 13th and 14th commitments for Kentucky in the class of 2015. Walker is rated by some services as the 16th best safety in the 2015 class. The two commitments pushed Kentucky to the #16 spot in the country for the 2015 recruiting class, ahead of the likes of Ohio State and UCLA.

Although his visit hasn’t produced a YAHTZEE, 5-star running back Damien Harris has been enjoying his visit to Lexington this weekend. It seems like Harris is on UK’s campus a lot as of late, and the momentum continues to build for what could be the biggest potential commitment in the Mark Stoops era.

Calipari hangs out with LeBron… Does the man ever stop? 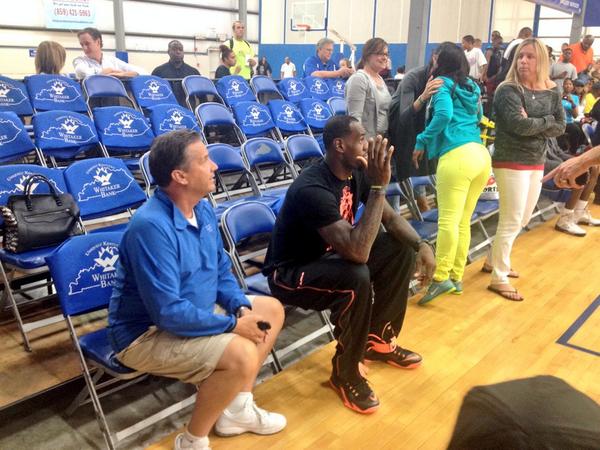 After a busy day on the recruiting trail at the Peach Jam in Augusta, Georgia… John Calipari managed to make it back to Lexington in time to catch up with LeBron James. James has been in town today watching his son “Bronny” play in an AAU tournament at KBA. James and Calipari were spotted enjoying a conversation while LeBron watched his son. LeBron’s son and teammates spent some time earlier in the day touring Cal’s office and the UK facilities.

Forget the few people who will somehow spin this into Calipari and LeBron talking about Cleveland… Does John Calipari ever stop? High school recruits have to be impressed that he shows up to watch them play AND then they get to see him with the best basketball player in the game right now, LeBron James. Not a bad move, Cal. Not a bad move at all.

The Peach Jam is one of those recruiting events that often leads to a more clear cut view of what Kentucky’s next recruiting class will look like. Barry “Slice” Rohrssen logged a lot of hours watching two 5-stars in Chieck Diallo and Tyus Battle. Slice has watched just about every minute of the games involving those two this weekend, showing Kentucky’s high level of interest in both players.

Kentucky is also showing a strong interest in 5-star shooting guard Allonzo Trier out of Maryland. Trier has just recently made his way onto Kentucky’s radar and according to reports, has been hearing a lot from Calipari lately. Trier dropped a cool 35 points in his game tonight, and he leads the EYBL in scoring.

Commonwealth will move to synthetic turf in 2015

A big piece of news that didn’t get enough attention yesterday was Mark Stoops’ announcement that Commonwealth Stadium is moving to synthetic turf after next season. Stoops said that since the stadium will be undergoing the majority of its renovation next summer, it’s the right time to make the move, which will allow the team to maximize their practice time at the stadium. Right now, because of the temperate climate in Kentucky, it’s just not possible to play on the field very often for fear of tearing it up:

“Our field has been disappointing to me. Our grounds crew does a phenomenal job. They work their tails off and do an incredible job, but the fact of the matter is that we can not get on that field that much.”

Four other SEC schools play on synthetic turf: Missouri, Ole Miss, Arkansas, and Vanderbilt. The switch to synthetic turf is happening more and more for schools in areas with climates like Kentucky’s. On this morning’s show, Jared Lorenzen pointed out that the move to turf may also mean the KHSAA Championship could move to Commonwealth Stadium in the future, which would be awesome.

The first YAHTZEE of the day belonged to a long-snapping walk-on, Blake Best

Earlier this morning Kentucky received a walk-on commitment from 2015 long-snapper Blake Best out of Suwanee, Georgia. Best attended a specialist camp at Kentucky last month and accepted the offer to walk-on this weekend.

Earlier in the free agency period, Darius Miller was waived by the New Orleans Pelicans. Many felt as if the Pelicans were still interested in keeping Miller on board though, and the good news arrived early this morning that the Pelicans will in fact re-sign Miller to a new contract. The terms of the deal are still unknown, but that’s great news for Miller.