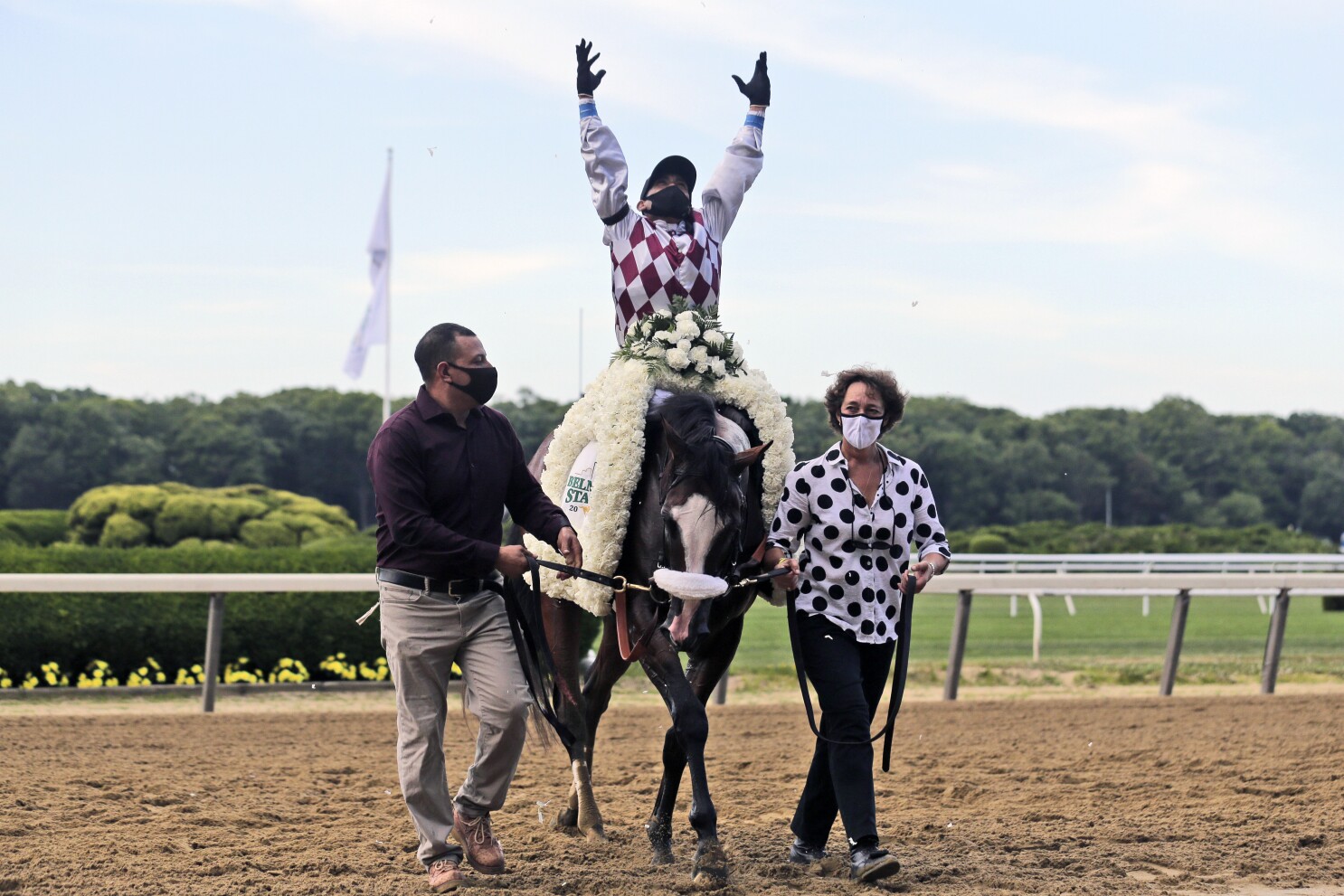 Tiz the Law and Manny Franco after capturing the Belmont Stakes. Image courtesy of LA Times.

Tiz the Law dominated the Belmont Stakes last Saturday and will be a deserving favorite on Derby Day.  He was much the best of those that competed, and we will find out if he is indeed the best of the class when he faces Santa Anita Derby victor Honor A P in Louisville on Labor Day weekend.  The son of Constitution’s interim engagement in the Travers at Saratoga figures to be a similar walkover as the Belmont – nothing more than a tune-up prior to facing a stiffer challenge in the Run for the Roses.  The thoroughbred racing scene shifts its focus this weekend, with older handicap stand-outs squaring off in the grade 2 Stephen Foster at Churchill and the Belmont lawn playing host to a defending champion in the grade 1 Just A Game for the distaff division.  The Stephen Foster anchors an all-stakes pick 4 at Churchill, and both top notch events are included in the weekly Cross Country pick 5 wager.  Our primary focus here will be the stakes action in Louisville.

Seven horses (6 colts and one gelding), seven starts and seven wins make up this typical early summer 2yo stake race.  Cazadero is clearly the one to beat off his 8 and 3/4 length demolition of an 11 horse field over this surface at the end of May.  The 81 Beyer he earned that day is a great number for a 2yo maiden race and puts him 20 points clear of his nearest pursuer.  Gatsby overcame a bit of trouble to defeat a next-out winner in his debut as 3rd place finisher Just Right Mike came back 3 weeks later to break his maiden at Gulfstream.  Hyperfocus is by the young sire sensation Constitution (sire of the aforementioned Tiz the Law) and certainly merits respect based on his human connections as well – Todd Pletcher, John Velazquez and Mike Repole teamed up to take the 2010 Breeders’ Cup Juvenile at Churchill with Uncle Mo.  County Final is interesting switching surfaces.  He ran 9 others off their feet over the Churchill grass 3 weeks ago, and his pedigree reads more like that of a dirt horse.

This 9 furlong handicap for older fillies and mares is a two horse showdown between 2019 Kentucky Oaks winner Serengeti Empress and 2019 Distaff division champion Midnight Bisou.  Midnight Bisou enters off a 4-month break following a narrow runner-up decision behind Maximum Security in the $20 million Saudi Cup.  That impressive effort against the best dirt males in the world will likely see her favored here today.  However, Churchill Downs is the only track she has competed over multiple times without a victory, having finished 3rd in both the 2018 Oaks and Breeders’ Cup Distaff.  Serengeti Empress, on the other hand, has two victories in three attempts at the Louisville oval.  She also has a very distinct pace advantage in this race.  She is quite easily the lone early speed.  That advantage and her affinity for the surface could carry her to an upset of the defending champion.

Pirate’s Punch figures to lead the way for a good bit with Silver Dust and By My Standards in close pursuit.  By My Standards should not have to work too hard to keep close and will likely get the jump on Tom’s d’Etat and Owendale closing from further back.  The Goldencents colt has returned a much improved horse thus far in his perfect 3 for 3 four-year old campaign, but this will definitely be his stiffest challenge of the season.  Owendale locked horns with the best of his generation last year and picked up a few nice trophies in grade 3 contests when taking a break from the upper echelon.  The Into Mischief colt posted an impressive comeback win in the Blame here last month and looks to back that up against a tougher group assembled here today.  Tom’s d’Etat is the fine wine of the bunch.  The seven-year old son of Smart Strike had the best season of his career in 2019, finishing with victories in the grade 2 Fayette at Keeneland and the grade 1 Clark over this course and distance at the end of November.  The Al Stall trainee earned his 7th straight triple digit Beyer figure in April when defeating subsequent Hollywood Gold Cup winner Improbable in the Oaklawn Mile.  This one should be a doozy.

Named in honor of the first filly to win the Derby, this 9 furlong turf affair drew 13 sophomore fillies.  In Good Spirits will try to make all the running once again, just as she attempted last month in the Tepin.  She should, however, face more pace pressure this time around from Eve of War, assuming that foe can find her way smoothly out of the gate.  An honest pace will leave this race seemingly wide open.  Hendy Woods has done nothing wrong in 2 starts, but climbing the class ladder from the outside post is no easy assignment.  Crystal Cliffs retains the services of Johnny V following her winning North American debut for the white hot Graham Motion.  The daughter of Canford Cliffs is a must use on all tickets.  Harvey’s Lil Goil makes the transition to the weeds from the main track.  A seven length winner of the Busanda over Aqueduct’s main track in February, she is certainly eligible to improve as the progeny of American Pharoah have taken to the green quite nicely thus far.  Pass the Plate rallied late to just edge In Good Spirits for 3rd in the Tepin.  Sharing, the Motion-trained victor of that event, returned across the pond at Royal Ascot last Saturday to finish in the runner-up spot in the group 1 Coronation over ground she clearly detested.  Pass the Plate and Julien Leparoux could certainly find the wire first today without the likes of Sharing and Abscond in this field.  Micheline took the Honey Ryder in her latest at Gulfstream, but like the rest of this field, she has yet to ring the bell amongst graded company.

Tough one to figure out, using Lebda, Sprawl, South Bend, Established and Storm the Court

Diamond King is intriguing cutting back to a sprint.  Promises Fulfilled and Firenze Fire certainly make sense.  May also use the long shot Yorkton.

Tom’s d’Etat, By My Standards, and Owendale

Defending Breeders’ Cup Mile winner Uni is the class of the field, 7 for 8 lifetime at the distance and 3 for 4 lifetime at Belmont.  She must overcome a 7 month layoff, but she has run well fresh before, and there should be just enough speed in the race to set up her patented late run.  Trust Chad Brown to have her ready.

A $0.50 ticket will cost $30 per horse in the finale.  Of In Good Spirits, Crystal Cliffs, Micheline, and Pass the Plate, hopefully one can get the job done.

Best of luck wagering with your favorite ADW on today’s great racing across the country.  Twinspires, Keeneland Select, NYRABets, and TVG are all great options.  You can follow me on Twitter @chadlashbrook.