Today’s a big day for Kentucky basketball recruiting, so we’re dedicating the Sleep Outfitters Recruiting Roundup to the Cats’ next big get: De’Aaron Fox…. 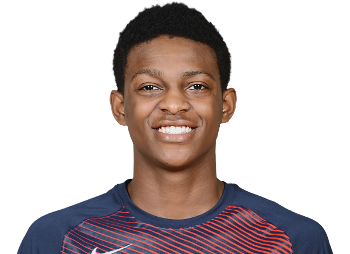 He received an offer from Kentucky…

He took his official visit to Kentucky…

Fox is a long and super quick combination guard that excels on the break and makes plays in the halfcourt with pull ups and slashes in between defenders. He is a rhythm scorer that can put up numbers in a hurry when confident, aggressive and doesn’t worry about his position. [ESPN]

“Basically, I see everything you want to see in a point guard. It would be very difficult to identify a major weakness in his game. Obviously, there’s room to improve and polish up his game, but he has the entire skill package, and the athleticism, length and intangibles you look for in a point guard.” [Herald-Leader]

An athletic and quick guard, Fox sits in between the point guard and shooting guard positions. But that’s part of what makes him so dangerous. Fox has a solid handle, is effective driving the basketball and is a talented passer, but he’s also just as — if not more — effective playing off the ball in a scoring role. He’s comfortable pulling up off the dribble for jump shots and is a very good scorer in transition. [Scout]

Another year, another five-star point guard for John Calipari. This time, he’ll land one in the mold of John Wall; an electrifying, athletic guard that is incredibly skilled and can play in a hurry, but under control. Fox will have NBA GMs salivating once he gets to Lexington, and he will only get better with the potential addition of Malik Monk to the class. 2016-17 will feature yet another exciting backcourt at Kentucky.

Two hours until decision time. In the meantime, buy a mattress.