Timing is everything in life. Sometimes success in life is simply a matter of being in the right place at the right time. Other times though, just missing out on success can entail simply being in the wrong place at the wrong time. Consider every other team in the NBA during Michael Jordan’s prime with the Chicago Bulls. Consider any other player in LeBron James’ NBA draft class. Perhaps consider most of the other teams in college basketball next season. Sometimes the second best player in one draft class would be the best player in any other draft class. In the case of maybe the most infamous runner-up of all-time, the horse Sham might have been one of the best horses to ever run in the Kentucky Derby. Many people know the name “Sham,” but Sham doesn’t have a Hollywood movie named after him. Sham isn’t held up as the gold standard for all horses to follow after. Sham’s name doesn’t ring with as much power as Secretariat. And yet Sham might have been one of the best to ever hit the track.

Sham was the horse that finished in second place behind Secretariat, arguably the greatest race horse of all-time, in every single leg of the Triple Crown. Sham amazingly broke the Kentucky Derby track record when he crossed the finish line… The only trouble was that Sham didn’t even win the race. Secretariat was faster. Had Sham been a year younger, or a year older– Sham would possibly be one of the glorified few horses to ever complete the Triple Crown. Timing is everything.

And now, as we head into tomorrow’s Derby events… let’s take a quick look at a few stories from the day…

If you hadn’t already felt the effects of the summer lull in action around the bluegrass as basketball season ends and we wait for football to begin, John Calipari’s hip surgery surely marked the beginning of a quieter stretch for Kentucky basketball. Calipari will take a load off for a while to recover from his hip replacement surgery that took place successfully this morning. Calipari was in a world of pain all season long, and hopefully this will provide him with much relief.

Although the season is over for Kentucky, May is a busy time for future recruiting purposes. Calipari will be limited for the time being, but Kentucky announced the hiring of new assistant coach Barry Rohrssen yesterday. Kenny Payne, Rohrssen, and John Robic will be hitting the trail hard laying the ground work for the 2015 and 2016 classes while Calipari recovers.

Until the Los Angeles Lakers name a new head coach, the rumors will continue to circulate about the possibility of John Calipari heading to the Lakers. The chances seem highly unlikely considering the number of players Calipari will return to Kentucky next season, along with the firm statements he has made thus far about the situation.

Calipari discussed the rumors, putting them to rest when he spoke to Renee Murphy of WHAS 11 last night.

““I’m at Kentucky, it’s where I want to coach. I’ve got a great job. I’m not saying the Lakers job is not a great job. Pro jobs are different jobs. Obviously the Lakers, Chicago, New York…you know, those are…but, I’m happy here. I have no intention from moving from here.”

For what it’s worth, John Wall weighed in on the notion that Calipari could make the jump to the NBA. Wall doesn’t seem to think it’s likely and envisions Calipari staying at Kentucky for the long haul.

“I think he’d be a great NBA coach, but I think he’s satisfied and happy. Being at Kentucky was his dream job. The stuff he’s done since he’s been there has been pretty amazing.”

Wall added that in his best opinion, Calipari would be at Kentucky for good. Wall also admitted that even if given the opportunity to go straight to the NBA after high school, he would have still opted to go to Kentucky. Why? Because he promised his father he would go to college.

UCONN will try to sweeten the pot to keep Kevin Ollie

Both coaches from this year’s NCAA national championship game are being thrown around in the Laker conversation. Kevin Ollie’s team was 2 minutes away from elimination in the first round and they wound up winning a national title in only his second year as head coach. Ollie’s star has never been higher, and the Lakers are apparently interested. For UCONN’s part, they will do their best to keep Ollie by offering him double his currently salary. According to Adam Zagoria, UCONN will offer Ollie $2.6 million annually, as the “floor” for his salary.

Ollie’s name has also been mentioned in the event that the Oklahoma City Thunder lose in game 7 (which now seems much more unlikely since the Grizzlies will be without Zach Randolph). The Thunder would be a more comfortable fit for Ollie who is close with Kevin Durant and played with the Thunder.

Patrick Patterson and the Toronto Raptors had a chance to win the series against the Nets tonight, but came up short on the road. The loss tonight will force a Game 7 in Toronto with the series tied at 3-3. Patterson finished with 8 points and 3 rebounds. 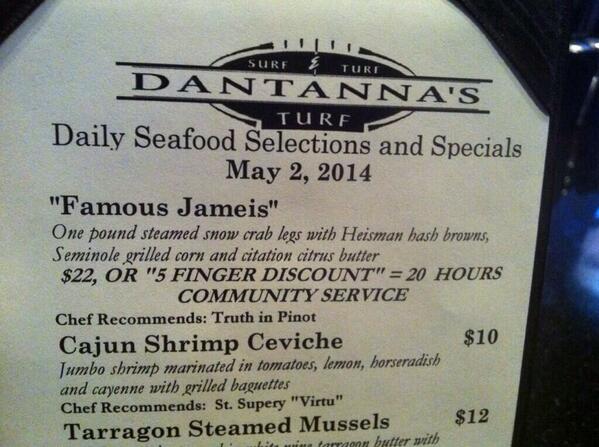 See you all tomorrow as we gear up for the Kentucky Derby. Who ya got?