Opening Saturday of Keeneland’s October meet has long been home to significant Breeders’ Cup preps, and this year is no exception.  The card features 5 graded stakes races with all but one offering expenses paid trips to thoroughbred racing’s championship event next month at Santa Anita.  This all-stakes pick 5 is quite the handicapping puzzle, but hopefully we can shed some light on a few of the top contenders: 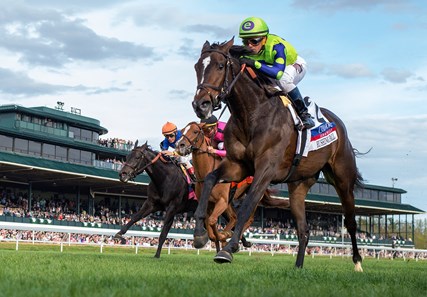 Fareeq and Satellite Storm should set up a hot pace for top choices Imprimis and Leinster to gobble up in the stretch.  Those two stand out on paper in this spot, and it would be a surprise to see anyone else other than perhaps Extravagant Kid crack the exacta.  Leinster is undefeated on the lawn at this distance, taking 3 of his last 4 starts, including the grade 3 Troy at Saratoga.  He had a very wide trip throughout, but still managed to get up for 3rd in the grade 3 Turf Sprint at Kentucky Downs.  Imprimis ran a huge number at Gulfstream to start the year and followed it up with another monster victory over this course and distance in the Shakertown.  He then shipped across the pond where he respectably split the field against some of the world’s best sprinters in the prestigious King’s Stand at Royal Ascot.  The Broken Vow gelding had a very rough trip in his return to the states at Kentucky Downs.  He should benefit from that outing and appears ready to fire his best shot over a grass course for which he has shown a prior affinity.

Danuska’s My Girl will do her best to take this field of 9 older fillies and mares from pillar to post, and given the lack of much other quality speed in the race, she may well be able to pull it off.  Spiced Perfection won the grade 1 Madison here in the spring, but followed that up with a flop in deeper waters next out in the Humana Distaff on Derby day.  She has not raced since, and while the daughter of Smiling Tiger has been training well in southern California, this is a tough spot to find the winner’s circle off the bench.  Mia Mischief must be respected based on her back class, with 4 victories and 4 runner-up finishes in 9 starts at this 3/4 mile distance.  The Into Mischief filly earned her breakthrough grade 1 victory in the aforementioned Distaff on Derby day.  She backed that up with a game victory against sophomore star Covfefe in perhaps the toughest overnight in Churchill history.  Since then, however, her form has tailed off with a pair of 4th and 5th place finishes at Saratoga.  The Heiligbrodt lass fired a bullet upon her return to Keeneland last weekend, so perhaps getting back to her Kentucky roots is just what the doctor ordered.  Chalon feels like the mare to beat in this contest.  She’s never missed the board in 9 prior starts at the distance.  The daughter of Dialed In has three impressive runner-up finishes over the local strip on her resume.  Her stalking style will suit her well as she should be close enough to a moderate pace to reel in the leaders through the stretch.

An exceptionally deep field of 14 fillies and mares will tangle in this grade 1 fixture on the Keeneland lawn.  Half the field could end up in the winner’s circle, but this space is reserved for Rushing Fall.  A perfect 4 for 4 over the Keeneland green, the More Than Ready filly will look to break a tie with the venerable Take Charge Lady for the most career Keeneland stakes wins by a filly or mare.  Her tactical speed will serve her well from post 11, and she is unbeaten in 4 prior attempts at the mile distance.  Juliet Foxtrot, Uni, Vasilika, and Indian Blessing will not make it easy on the favorite, but the Queen of Keeneland reigns supreme until she’s toppled from her throne.

Ten two-year old males will tussle for a spot in next month’s Breeders’ Cup Juvenile in this Fall Stars weekend staple.  Young horses can make exponential jumps from one start to the next, so no contestant would be a shock to find the winner’s enclosure.  While impossible to eliminate anyone, there are several that offer slightly more intrigue than the others.  Tap It to Win scored by an increasing 3+ lengths on the wire when trying the main track for the first time at Saratoga.  The 86 Beyer figure he received for that effort is highest in this field, and he enters this with a recent bullet at Belmont to his credit.  The rail draw is always a concern, but he handled the inside post in upstate New York with aplomb.  By Your Side beat Grade 1 Hopeful winner Basin in his Churchill debut and backed that up with success in the grade 3 Sanford at Saratoga.  He wanted nothing to do with the slop in the Hopeful, and trainer Eddie Kenneally brought him right back to Kentucky where he has fired two straight bullets over the local oval in preparation for his two turn debut.  Ajaaweed improved when given an extra quarter of a mile to work with in his second start at Belmont, and his pedigree claims he will relish the addition of a second turn.  Enforceable is the only horse in the field with a win going 2 turns.  Out of a grade 2 winner going 9 panels in Justwhistledixie, the Tapit colt broke his maiden in a rare 9 panel juvenile race at the Spa.  That experience and the stamina built from that effort could pay off handsomely in his stakes debut.  These early juvenile route races often fall apart in deep stretch as many of the contenders prove to be sprinters stretching beyond their capabilities.  If that scenario plays out here, Maxfield could be the primary beneficiary.  The son of Derby winner Street Sense overcame a slow start and made up 8 lengths to find the wire first in his Churchill debut out of the one mile chute.

This full field of 14 is not a super-imposing group, at least not at this stage of their careers.  The distaffers in the First Lady, collectively, are probably a better group, and at least 2 or 3 of them would have been favored in this spot had their connections been inclined to chase an additional $360,000 in winning purse money.  The winner could come from anywhere in here as this is a field that is largely past its prime.  Of the American based horses, Bandua and Real Story are most intriguing as they should settle nicely at the head of the pack in this largely paceless affair.  Real Story will certainly be asked for immediate run from his outside post.  This is a bit of a step up the class ladder for him, but he was beaten less than a length by grade 1 winner Catholic Boy in the Dixie going a sixteenth of a mile further in May.  He’s capable of taking them a long way.  Bandua led the Arlington Million field until the late stages, succumbing by less than 2 lengths to division leader Bricks and Mortar.  His pedigree and running style both suggest he will appreciate the cut back in distance from the longer routes he’s been competing in, and he looks like a real player stalking the pace of Real Story.  Valid Point is perfect in 3 starts for Chad Brown, and he steps up to face elders for the first time following a grade 1 accomplishment in the Secretariat on the Arlington Million undercard.  He should be close enough to the pace to avoid traffic issues in the stretch, but bettors will have to ask themselves if they really want to play a horse that may well go favored – in just his 4th lifetime start and first against older horses.  If you like Valid Point, the price will be much nicer on fellow sophomore Van Beethoven.  The Scat Daddy colt lost all chance when hopping at the break in the Secretariat, but still closed resolutely to fill the runner-up slot, beaten just a length by the winner.

Best of luck at the windows.