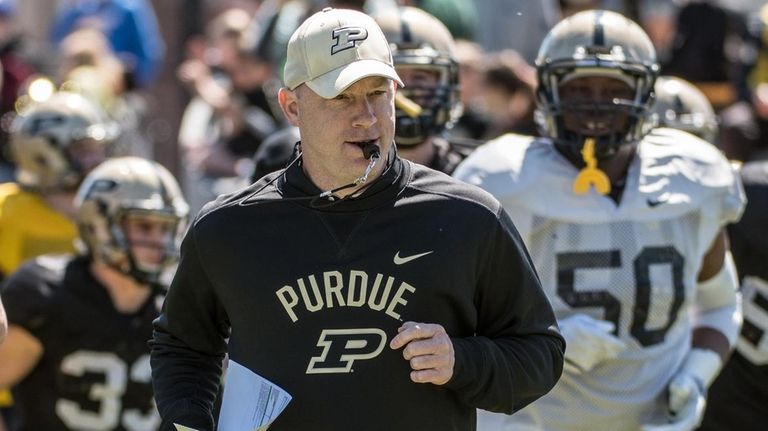 When Mark Stoops and Vince Marrow began recruiting at a rate unequaled by their predecessors, only the big dogs — namely Ohio State and Alabama — stood in the way of Kentucky’s Big Dog.  Now there’s a new kid on the block raising hell in the recruiting world: Purdue.

The artist formally known as “Purdude” has turned into a recruiting nightmare for Kentucky.

In his first season as the Boilermakers’ head coach, Jeff Brohm compiled a seven-win season that ended with a thrilling bowl victory over Arizona.  Riding a wave of momentum, Brohm has made quite a few splashes on the recruiting midwestern scene.

It began with Rondale Moore.  A four-star Army All-American, the Trinity slot receiver flipped from Texas to Purdue just ahead of National Signing Day.  At the time it was perceived as a miraculous flip.  It actually was just the beginning of a blazing hot recruiting season.

Brohm has deep-rooted connections within the state of Kentucky that could pay dividends at the right time.  For the most talented in-state recruits, it’s always been a battle between UK and UofL.  Now it’s a fatal three-way with Purdue in the 2019 class, the most talented group the Commonwealth has produced in years.  J.J. Weaver and Wandale Robinson have already been to West Lafayette for official visits.  Milton Wright has taken almost zero visits, but he’s been to Purdue.

It does not take a wise man to presume Brohm — a former Mr. Kentucky Football, UofL starting quarterback and WKU head coach — could recruit well in Kentucky, especially with a new facility and a ton of on-field momentum.  However, a few recent recruiting decisions have sent a shockwave through the midwest.

In two weeks, Purdue has landed a pair of commitments that were perceived to be heavy-leans to Kentucky.  The Boilermakers went to Detroit, a territory where UK has recently made a lot of noise, and picked up a commitment from four-star safety Marvin Grant.  It happened only a few weeks after Grant was expected to announce a commitment to Kentucky.  Last weekend Ohio defensive end Dontay Hunter, Benny Snell’s former high school teammate, picked Purdue over UK.  Huh?  Since Hunter’s decision, six others have committed to Purdue, increasing the Boilermakers’ total to FIFTEEN commitment in the month of June.

Purdue is riding a wave of recruiting momentum that resembles Mark Stoops’ meteoric rise in the midwestern recruiting scene.  Each program sold a new facility with a rising, innovative coach where players can leave a lasting legacy by turning around a program.  In the interim, Kentucky has adjusted by investing more in the deep south, picking up three commitments from the area in the last week.

As West Lafayette has transformed into a popular destination, Kentucky has taken some lumps.  UK football can’t afford to take too many more.

*** If you’ve ever listened to a KSR Football Podcast, you’ll know that the Brohms are my cousins.  That doesn’t change what’s happening on the recruiting scene in the Midwest.

47 Comments for Purdue Football has become a Problem