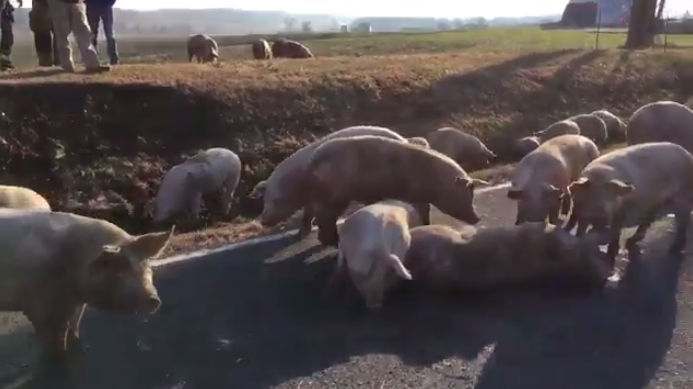 Here’s a lighthearted story for you, courtesy of our friends at LEX18. This morning, police were forced to close Highway 56 in Daviess County near West Louisville because a semi-truck carrying pigs overturned. None of the pigs were hurt, and the driver only suffered minor injuries, but crews struggled to round up the animals, who took the opportunity to enjoy some mud and sunshine:

Check this out!! A semi carrying pigs overturned on Hwy 56 and pigs are running EVERYWHERE pic.twitter.com/e0S6Zdg3fx

56 is currently closed while crews figure out what to do with all of these pigs! pic.twitter.com/foYQ38nuBK

I’m told the pigs out here right now are all alive and “enjoying the sunshine”. But pigs can’t take stress so some may not make it later. pic.twitter.com/wwZ4eqBb2L

Here was the last group of pigs crews gathered up. The Sheriff’s Office tells me all pigs are heading back to the farm where they came from pic.twitter.com/YgK56fUTjq

I’m not gonna lie, I got a lot of enjoyment from this story.

7 Comments for Pigs force closure of highway in Daviess County