PGA golfer Jeff Overton is an Indiana alum and loves him some Hoosiers. He loves them so much he went to the Indiana/Louisville game last night and had to be kicked out when he got a little too boisterous. Overton sent this tweet during the game, which has since been deleted: 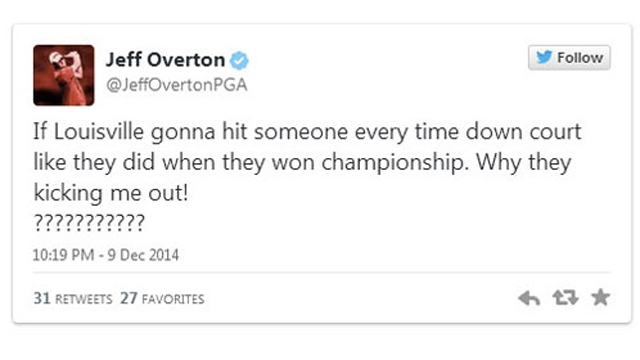 This isn’t the first time Overton has acted up over his Hoosiers. When Indiana beat Kentucky in December 11, he was arrested on three misdemeanor charges of public intoxication and disorderly conduct. From GolfNewsNet.com:

After the IU-Kentucky game in Bloomington on Dec. 14, 2011, Overton was arrested on three misdemeanor charges of public intoxication and disorderly conduct. Earlier in the day, Overton appeared at the game against Kentucky to present a $50,000 check to the university. Early the next morning, Overton was in the passenger seat of a limo, yelling at people outside the vehicle at 3 a.m. Bloomington police pulled the limo over. Overton, who police said he was “belligerent,” refused to provide his identification or step out of the vehicle. Police extricated Overton from the car and arrested him. Overton felt he was mistreated by police.

Just another proud graduate of the University of Indiana.