The 2018 thoroughbred racing season hits full stride in Kentucky this weekend with the start of the spring meet at Keeneland.  Eight graded stakes headline the action across the meet’s opening 3 days.  Major preps for the Kentucky Oaks and Derby highlight Saturday’s action.  Louisville’s own Brad Cox seeks the first grade 1 victory of his bright young training career with Monomoy Girl as a heavy favorite in the Ashland Stakes.  Trainer Chad Brown looks to get 2yo champion Good Magic back on the right track when he takes to the post in a competitive renewal of the Blue Grass Stakes.  The biggest story of the weekend could turn out to be the weather.  Saturday’s forecast is currently calling for a high of only 37 degrees and the possibility of up to 4 inches of snow.  Happy Kentucky Spring everyone!!! 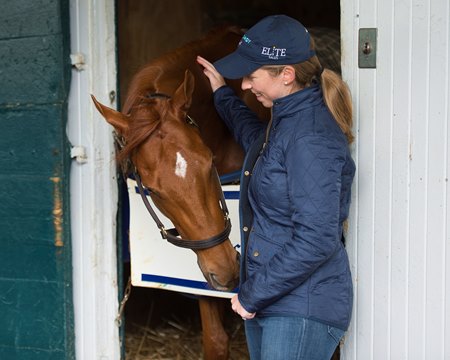 A full field of 12 3yo colts will contest the Grade 3 Transylvania Stakes at a mile and a sixteenth on the grass.  In a race severely lacking pace, expect the heavy favorite Analyze It to take command early from the far outside post and lead from gate to wire.  He dominated his two races as a 2yo, and his speed figures are clearly superior to anything else in this field.  Tap Daddy, who had trouble in his last start, Determinant, and Captivating Moon are all interesting upset possibilities at longer odds.

Limousine Liberal is the 6/5 morning line favorite in this seven panel Grade 3 sprint for older horses.  He is only 1 for 5 lifetime at Keeneland and has not raced since November.  He has never fired his best shot coming off the bench, and it would be unwise to expect him to do so in his first start as a 6yo.  Conquest Windycity, on the other hand, is 2 for 3 at Keeneland.  After mostly racing around 2 turns in 2017, trainer Mike Maker cut him back to this 7 furlong distance for his 5yo debut at Gulfstream Park in February.  The son of Tiznow responded with a gate to wire victory over Mind Your Biscuits, who came back to win the $2 million Golden Shaheen in Dubai last weekend.  Regally bred Westwood, by Preakness winner Bernardini out of champion mare Ashado, has won 3 of his last 4 for Godolphin Racing and should be forwardly placed early.  It would not be all that surprising to see him take another step forward and contend for the win in his first try against stakes company.  First Premio is an interesting outsider cutting back in distance and coming from well off the pace for Mark Casse.

Disco Partner will be a deserving favorite in this Grade 2 turf sprint, but he drew a very tough outside post, this is his first race of the year, and his works do not indicate that he is sharp enough to get the job done off the layoff.  The 5 1/2 furlongs also may not be his ideal distance.  Bound for Nowhere is very interesting at 20/1 on the morning line.  He blew the doors off of a first level allowance field over this track and trip last spring and then ran very respectably in a Grade 1 affair at Royal Ascot.  He received a tightener for this just up the road off I-75 at Turfway Park and his recent works indicate Wesley Ward has him ready to roll.  Will Call has won 2 of 3 since switching to the grass, with his lone loss coming just a half length behind Holding Gold, who won this race last year.  He’s certainly capable of finding the winner’s enclosure for Brad Cox.

The Grade 1 Madison at 7 furlongs on the main track for older fillies and mares is a wide open contest.  American Gal and Finley’sluckycharm are co-favored on the morning line.  Finley’sluckycharm has not yet proven herself amongst upper echelon competition, and it’s tough to trust her to see out the 7 furlong distance, especially with this much speed in the field.  American Gal is making only her 7th lifetime start and still has significant upside.  She may well prove to be an absolute beast of a sprinter this year, but she’s making her first start in 7 months and it is a tall task against this field.  Ami’s Mesa led in the stretch of the Breeders’ Cup Filly and Mare Sprint at Del Mar and finished runner-up by a mere nose against the toughest field assembled in this division last year.  She has a steady string of works for her return and is eligible to improve in just her second start on dirt.  She should benefit from what is likely to be a suicidal pace and offers great value at 6/1 on the morning line.  Salty is another intriguing prospect at double digit odds.  Competing against the best 3yo fillies in route races last year she always gave the impression that she might fare better around one turn.  She handled her first start against older fillies with aplomb in a one mile race at Gulfstream Park on the 1st of March.  Don’t sleep on her.

The momentum of the Brad Cox stable has been building steadily over the last 3 years, and the Louisville native who grew up in the shadow of Churchill Downs will look to take the favorite to the Kentucky Oaks by securing his first grade 1 victory with Monomoy Girl in the Ashland.  She is nearly perfect in 5 races, with her lone defeat coming by just a neck in her graded stakes debut in the Golden Rod at Churchill in November.  She’s extremely versatile, having won from the front end as well as coming from dead last after hitting the gate in the Grade 2 Rachel Alexandra at the Fairgrounds.  The daughter of Breeders’ Cup Dirt Mile winner Tapizar has bullets sprayed across the work tab, and she is absolutely the one to beat in this marquee Kentucky Oaks prep on Saturday.  Eskimo Kisses certainly deserves respect for Kenny McPeek.  She finished just a head back of Chocolate Martini in the Fairgrounds Oaks after two straight victories at Oaklawn.  Andina Del Sur makes her first start on dirt after a win in the Florida Oaks on the turf, and being by Giant’s Causeway, there is a decent chance she may relish the change.

A full field of 14 3yo colts will attempt to earn valuable Kentucky Derby qualifying points in the 94th running of the Blue Grass Stakes.  There are indeed a plethora of options to choose from if you do not “believe in magic”.  Free Drop Billy won the Breeders’ Futurity here by 4 widening lengths in the fall.  Flameaway deserves respect off his Sam Davis victory and runner-up finish in the Tampa Bay Derby, in which he did have some early trouble.  Quip, winner of the aforementioned Tampa Bay Derby, is 3 for 4 lifetime and his lone poor effort came when he was steadied and lost all chance in the KY Jockey Club at Churchill last fall – a race which has turned out to be one of the most key races of the 2017 juvenile season.  Sporting Chance provides the field with a third Grade 1 winner.  The feeling here however is that the depth of this field is, in reality, just a mirage.  Good Magic tore apart a top notch field in the Breeders’ Cup Juvenile, his two-turn debut.  That effort was not a fluke as he had finished 2nd by just half a length in his second start, the Grade 1 Champagne at Belmont.  The son of Curlin was a disappointing third in his 3yo debut in the Fountain of Youth.  Trainer Chad Brown has had the Kentucky Derby as his primary goal for this horse ever since his Breeders’ Cup victory in November.  He has repeatedly stated that he is prepping him to peak on the first Saturday in May.  Clearly, he was not fully cranked for the Fountain of Youth, and Brown may be guilty of being over confident and not prepping his charge hard enough prior to that effort.  The handsome chestnut fired a bullet at Palm Meadows on the 31st of March and currently sits 15th on the Kentucky Derby points qualifying list, possibly in need of more points to secure a starting spot in the gate at Churchill.  Expect a peak effort from the champion at post time on Saturday.

The Beaumont at 7+ furlongs for 3yo fillies drew what looks like a very evenly matched group of nine.  Dream It Is was extremely impressive taking the Grade 3 Schuylerville at Saratoga by 9 widening lengths last July.  Her perfect 3 for 3 record and that black type victory make her the most accomplished filly in this field, but she has been off since that effort at Saratoga and faces a solid field in this comeback spot.  Happy Like a Fool captured her debut here last spring for Wesley Ward and backed up that performance with a victory in the Grade 3 Matron at Belmont following a trans-Atlantic sojourn.  She defeated Take Charge Paula who came back to win the Grade 3 Forward Gal at Gulfstream this term.  Trainer Brad Cox strikes at a 65% clip when removing blinkers and 34% when cutting horses back from a route to a sprint.  He’s doing both with Kelly’s Humor.  Uppercut and Gas Station Sushi both enter off fashionable maiden breaking efforts in California, and both jockeys see fit to make the trip with them.

Rushing Fall was the best 2yo filly in America last year.  She has a win over the local sod and won her Breeders’ Cup race from a difficult post position.  This race is certainly hers to lose.  Thewayiam should not be discounted as she has been successful in 4 out of 5 trips to the post in North America.  Daddy Is a Legend adds Lasix for the first time and comes in fresh following an eye catching maiden win here last fall prior to a Grade 3 victory in her 2yo finale at Del Mar.

Best of luck to everyone at the windows over a very exciting opening weekend.  You can follow me on Twitter @chadlashbrook for more racing coverage.