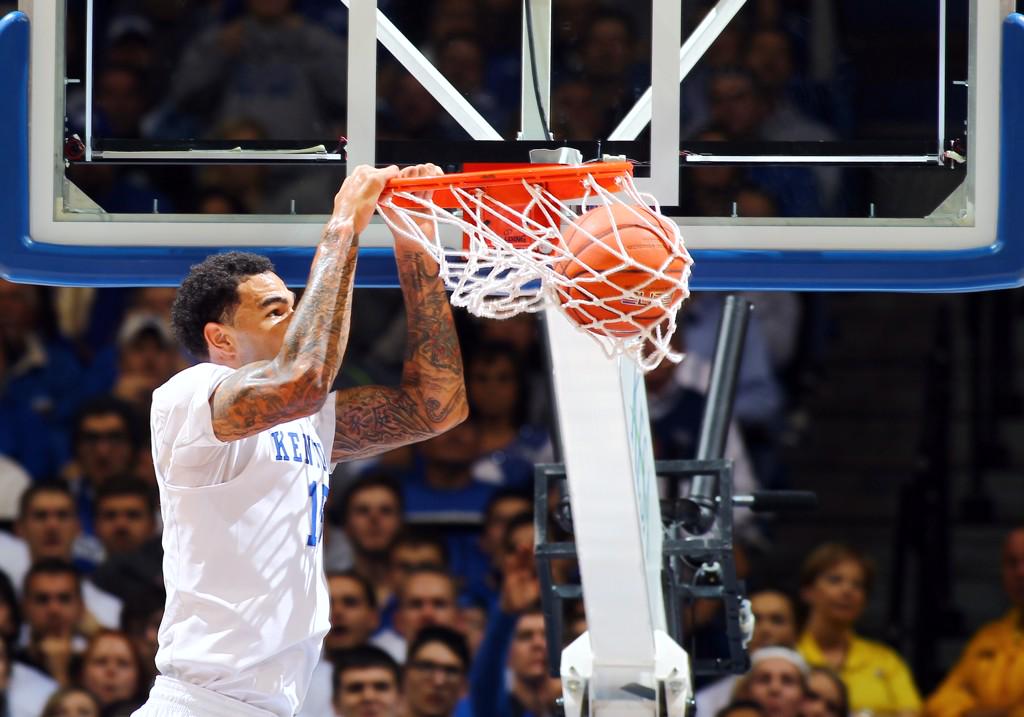 Good evening, sports fans. Everyone have a good weekend and a tolerable Monday? Get your Christmas shopping done? We survived the KSR Christmas party 2014 after that exciting basketball game in Rupp Arena on Saturday. Man, the Cats are looking good and Willie Cauley-Stein is ridiculous. I’m expecting another fun one this coming weekend in Chicago when UK handles UCLA to set up a meeting of undefeated teams in Louisville. And then they’ll win that one, too.

But before we get ahead of ourselves, let’s go over what little news came through the wire on Monday. We heard a new name in the offensive coordinator search and Kentucky held down its top spot in the polls.

According to FootballScoop.com, Mark Stoops reached out to Steve Spurrier Jr. about his offensive coordinator vacancy. There’s nothing more to the report than “I know they talked” but it’s interesting to hear. Bob Stoops vacations with Steve Spurrier so there is a connection.

The website also expects Stoops to have his guy this week.

My money is on Lincoln Riley.

Let’s lock him up.

Willie Cauley-Stein is blowing up.

With two outstanding performances against No. 6 Texas and No. 21 North Carolina, Willie Cauley-Stein is the talk of college basketball these days. Saturday’s showing moved him up to fourth in DraftExpress.com’s new mock draft, one spot behind Karl Towns, while Sam Vecenie over at CBS Sports said Willie is his pick for National Player of the Year.

Keep in mind, Willie believes he hasn’t even started to peak. “I’m still climbing,” he said after the UNC game. “If I really want to be the best player in the country, all I have to do is work at it and eventually I’ll get there.”

Kentucky is the unanimous No. 1 team in the new AP poll.

The Cats received all 65 votes from AP voters in this week’s new rankings. Duke and Arizona each got a vote in the USA Today Coaches poll, leaving UK with 29 of the 31 first place votes.

Word is Harris really enjoyed his official visit to UK and the coaching staff believes they are in good position to get a commitment next month. However, Alabama is still Alabama so it’s far from over. Harris will be surrounded by future Alabama players (11 commits) at the Under Armour All America Game and Saban will have them recruiting for the Tide on the weekend before Harris announces. That’s certainly a worry for UK, but this past weekend’s visit couldn’t have gone better.

Coach Rohrssen was at Zimmerman’s high school practice Monday in Las Vegas, along with UNLV head coach Dave Rice. Zimmerman plans to wait until the spring to make any decisions but UK is staying on him, even after landing Skal Labissiere.

Kentucky’s next point guard told NJ.com, “Nobody can stop me, at all.”

Kyle Wiltjer is ballin’ at Gonzaga.

Wiltjer had 21 tonight on 9-of-11 shooting, his third consecutive game with at least 20 points. He put up 24 on UCLA over the weekend and is averaging 17.2 points per game while shooting over 50 percent from the field for Jeff Goodman’s favorite team. Good for Kyle.