Hello there, KSR readers and those of you spying on us from other fan bases. How about that screen grab of Willie Cauley-Stein, huh? It reminds me of my old playing days, when the Madisonville ABA All-Stars would travel to Hopkinsville for a similar scene against Hop-Town’s C-Team. (Me being the Providence guy, not Willie.) We used to give up all kinds of highlight reel plays to their sixth and seventh graders. Good times, good times.

But enough about my basketball failures, let’s talk Kentucky basketball, its lack of failures and the other happenings around BBN, including a new coaching search in the football program. You could be the next OC, ya know. I’ll explain…

The search for Kentucky’s new offensive coordinator is on.

With the departure of Neal Brown to Troy, Mark Stoops is now in the market for a new commander of his offense next season. Mrs. Tyler did an excellent job of profiling each of the rumored candidates, listed below:

James Coley, who coached with Mark Stoops at Florida State, was on the short list for the job when Stoops took over in Lexington two years ago. Coley is now at Miami and was reported to have an offer on Monday, although KSR was told by someone we trust that no one has an offer. Not yet at least.

Admittedly, I know very little about the candidates other than what Tyler dug up today, but I do like the thought of Coley at UK. He was the ACC Recruiter of the Year in 2010 and is very connected in Florida after five years with the Seminoles and now his current role at Miami.

But regardless of who it is/will be, Stoops needs to find him soon. Damien Harris commits in less than two weeks and I can’t imagine he’ll pick a school without an offensive coordinator.

YOU can apply to be the next OC.

The official job posting is now up and running on the UK Jobs website. Feel free to apply, but you must know: all candidates must be able to lift, push, pull objects up to 25 lbs.

The basketball Cats are No. 1 in the country, again.

In the least surprising news of the day, Kentucky found itself as the No. 1 team in the country in the new AP and USA Today Coaches polls. The Cats received all but three of the 65 votes in the AP, surrendering those to Wisconsin because three voters don’t have eyeballs.

Rick Pitino called Kentucky one of the best teams ever assembled.

When talking about his team’s non-conference schedule today, Pitino slipped in a compliment to his rival. He said, “Opening with Minnesota was difficult, of course playing against Kentucky in one of the best teams ever assembled is going to be difficult.”

He also had good things to say about Big Blue Nation when comparing tomorrow’s home game against Ohio State to hosting UK in the Yum:

Rick’s telling the truth, for once.

We have a rare five-day break between games before No. 6 Texas comes to town Friday night. That means we have plenty of time to preview the Longhorns, beginning tomorrow when I tap into their media guide, game notes, and Instagram accounts. One thing we do know already: Texas needed a one-handed toss from the corner to beat UConn as time expired on Sunday. That, and they play UT Arlington tomorrow night.

If you love Jared, and I know you do, look for his first post around noon.

The Antoine Walker documentary is coming to Kentucky next week. 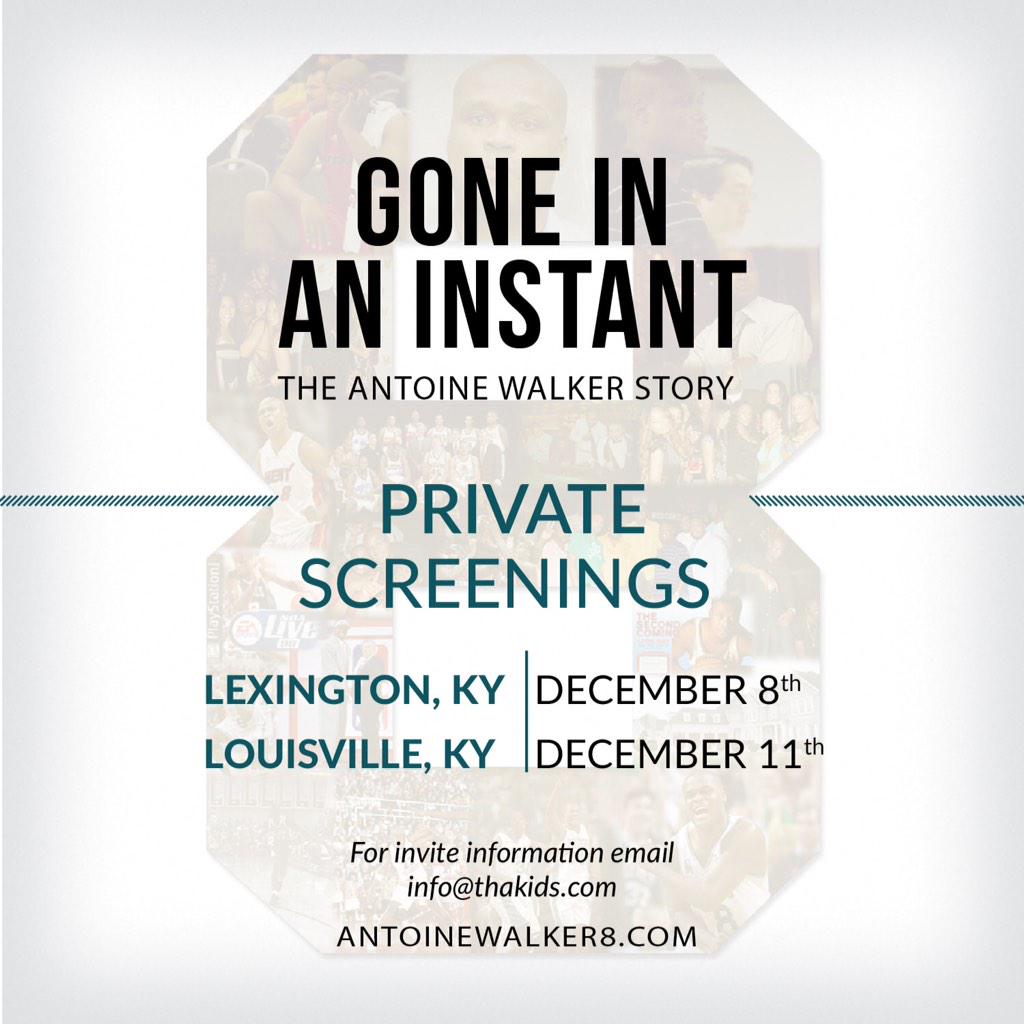 Lexington and Louisville will host private screenings of “Gone In An Instant: The Antoine Walker Story” next week. It will first hit Lex on December 8th before moving to Louisville on the 11th. Check out AntoineWalker8.com for more information.

Not having a new Homeland on Sunday ruined my Thanksgiving weekend.

Never mind the fact that I missed the Louisville game because I was in the fetal position in the bathroom floor for 10 hours, or that I didn’t eat food from Friday night until about three hours ago, or that I fell through a display at Speedway because I was too weak to walk from the Gatorade to the register…. HOMELAND HAD THE WEEKEND OFF. That’s why the weekend sucked. Homeland fans, you know where we are right now and all I’m going to say is: Quinn. It’s Quinn time. It’s on. Get here, Sunday.

Kentucky’s favorite music duo released a new album Monday. I haven’t gotten around to listening just yet but I did read this article on them in Rolling Stone. Give it a read and check out “Salvation City,” the new album on iTunes.

That’ll do it for now. Go Cats.