This weekend Kentucky is hosting two talented four-star recruits — Bowling Green defensive back Vito Tisdale and JUCO offensive lineman Jeremy Flax. Before the Wildcats roll out the blue carpet, Mark Stoops made a few more stops on the recruiting trail.

Kentucky’s head coach was spotted Thursday afternoon at North Hardin High School. Stoops spoke to a UK-clad Octavious Oxendine less than a week before the four-star defensive tackle announces his school of choice on Dec. 18. Ox isn’t the only UK target at North Hardin. Two juniors, running back Lavell Wright and defensive back Jordan Lovett, are near the top of Kentucky’s 2021 big board. 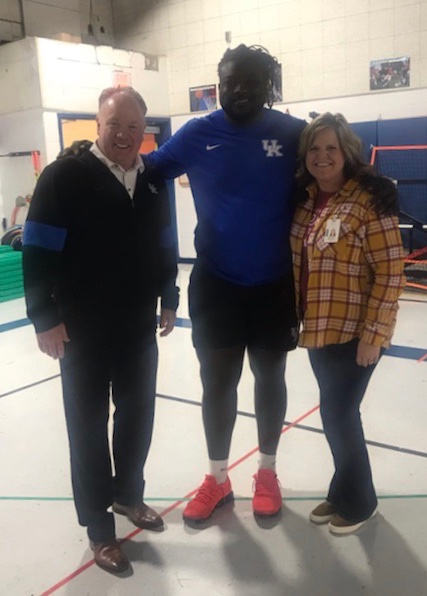 Friday morning another monster in the trenches made news. R.J. Adams, the No. 12 offensive guard in America, announced he has moved his announcement ceremony up one day to Tuesday, Dec. 17. Adams will choose between Kentucky, N.C. State, Penn State and five other finalists from Woodbridge High School in the DMV-area at 2:45 p.m. ET.

Joining cornerback Joel Williams, the move by Adams means Kentucky has two four-star targets announcing the day before the beginning of the Early Signing Period. Up to eight recruits could pick UK in the final two days of the recruiting period. This will go down as the most exciting signing day of the Mark Stoops era.