The city of Paducah began the year of 1937 with two weeks of rain and a sleet storm. By the end of January, water levels reached around 59-feet tall and a military supervised evacuation began.

On February 2, water levels reached its highest point and 95% of Paducah was underwater.

During this time, a local man named Luther F. Carson was bottling and selling Coca-Cola in his third bottling plant on 6th Street. Carson, like everyone else, was evacuated and had to abandon his the operation.

“What he did is they were sending Jon boats,” said Dry Ground Brewing owner Ed Musselman. “They had temporary docks built on 28th Street and then down Broadway and the Red Cross evacuation site was where The Twinkling Star is across the street. And so they were running these Jon boats down, down Broadway all the way down to people being evacuated, but it’s early February at the time, so the water is extremely cold, so getting people into these Jon boats was a little bit of a challenge. So he and another worker floated out of the second-floor window of their 6th Street location to get to the Jon boat.

“I love the legend,” said Dry Ground manager Cory Greene. “I don’t know how much truth is in it, in that he was floating up Broadway in a syrup barrel.”

While Carson was being evacuated he said, “If I ever reach dry ground, that’s where I’m going to build my bottling plant.”

And that is what he did.

Carson built his Coca-Cola bottling plant in the location where the water stopped at the corner of Broadway and 31st Street. Carson’s Coke Plant still stands today as the home of Dry Ground Brewing. 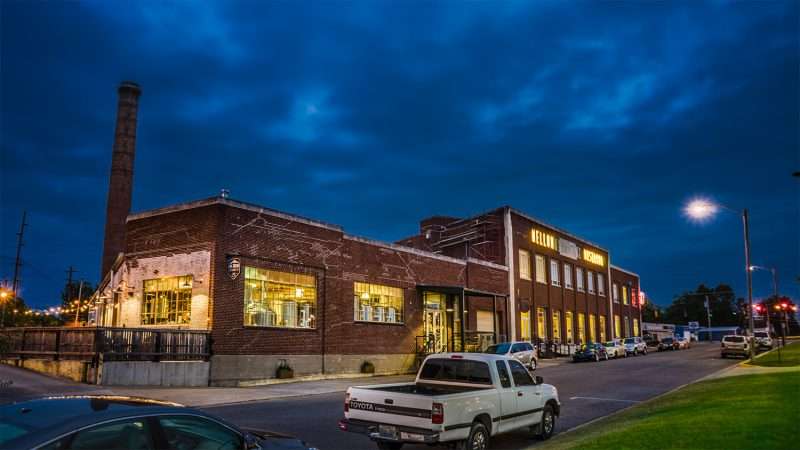 The people of Paducah had a taste for craft beer with Nashville and St. Louis a little over two hours away. But Musselman knew Paducah needed its own craft brewery and beer they could call their own.

“Paducah was the perfect craft beer city,” Musselman said. “A very creative town, artistic in nature without a craft brewery. It’s something that we wanted to do.”

The historic Coke Plant was the perfect location for Paducah’s first craft brewery. From the layout to the location to the history, it only made sense that the old bottling plant would go from soda to craft beer.

And the name of the brewery? That was a no-brainer.

Dry Ground Brewing opened in February of 2015, 78 years after the flood that devastated so much of the city.

Even after 78 years, Dry Ground Brewing pays homage to the flood that made Dry Ground what it is today with the names of some of the beers; Uncle Luther (Extra Special Bitter), ’37 Flood (IPA), Under Tow (DIPA) and Labelle (Belgian Brown Ale). Dry Ground is proud of the city they call home.  That is why the staff names the beer after something local. From a local business owner to a band to a famous local deli, all the beer names have something to do with Paducah.

“Paducah is a great community,” Greene said. “So many creative people and that’s the greatest thing. We want to collaborate.”

“Everything that we do, it’s better if we do it with somebody else,” Musselman said.”

Whether it be Pipers Tea and Coffee, Kirchhoff’s Bakery and Deli, Panacea Juice and Smoothies or local farmers, Dry Ground wants to collaborate with you and promote not only Paducah but Western Kentucky.

It’s a great return for the organizations and people Dry Ground works with because of the reputation Dry Ground has created. From the seven-member staff that’s all been there since the beginning to the lack of televisions, Dry Ground is a place people want to go to.

“We brew good beer and we are really proud of the quality of our beer,” Musselman said.

As they should be.

My beer picks at Dry Ground

Something light: Kirchoff ‘s Kolsch: A delicious German beer that any beer drinker can get behind. It’s light and smooth and named after the famous Kirchoff’s Deli.

Something in the middle: ’37 Flood: My favorite IPA ever. It’s a great starter IPA for people who are still trying to introduce themselves to IPAs. I get my growler filled with this one a lot.

Something heavy: Adam’s Beard: I LOVE Belgian Tripels even though they are sneaky dangerous. This is sneaky delicious though.