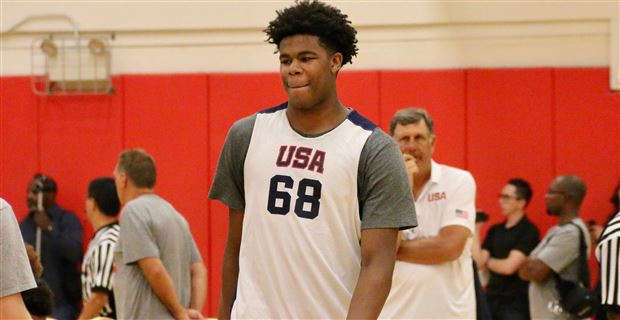 Some very important Kentucky targets are well on their way to earning gold in the 2018 FIBA U17 World Cup played in Argentina.

2020 phenoms Jalen Green and Scottie Barnes, along with 2019 talents Vernon Carey Jr., and Isaiah Stewart, among others, helped lead Team USA to a 120-71 victory over Canada (5-1) in the semifinals last night. The 49-point victory for the USA was the largest margin of victory ever recorded in a men’s FIBA U17 World Cup semifinal. Their 120 total points were the most points ever scored in a semifinal, as well.

Green led the team with 25 points, followed by Barnes with 18 points and four assists, Stewart with 12 points, and Carey Jr. finished out the Wildcat targets with ten points.

Kentucky assistant coach Joel Justus has been in Argentina watching his targets in action. He also traveled to Argentina last summer to watch the USA Basketball U16 squad and went to Spain two summers back to watch the U17 team, a trip that helped nab Kentucky guard Immanuel Quickley.

When it comes to Green, the No. 1 recruit in the class of 2020, the UK coaching staff is starting to reach out and are reportedly “really interested.”

“I’ve talked to Kentucky and Duke and they both said they’re really interested,” Green told Rivals.com back in April. “I would say Kansas is making me a priority since they offered last month. I talked to one of the coaches at Duke and they said that I’m a main priority in the 2020 class.”

As for Barnes, who received a Kentucky offer back in April, said it was a “dream” a school like UK is showing heavy interest.

“When you get an offer from one of those schools, it’s everybody’s dream,” Barnes told Ben Roberts of the Herald-Leader. “It just shows how much work you put in to the game. It just shows what your success is bringing.”

In an interview with current free-agent Kentucky beat writer Kyle Tucker, Carey said Coach Cal is selling him on playing like Anthony Davis and DeMarcus Cousins in Lexington.

“[Calipari] texts me every other day,” Carey said. “He just says look at Anthony Davis and DeMarcus Cousins, just take parts of their game and add it to mine. It feels pretty special for me to get recognized and kind of compared to them.”

He says he’s really good friends with former Kentucky star Bam Adebayo, who told him that if you want to be a one-and-done talent, you go to Kentucky. No questions asked.

“[Adebayo] says if you’re trying to go to the league after your first year, that’s the school to go to. Coach Cal is just going to help you develop,” Carey said. “I feel like if you want to go one-and-done, then you just go there.”

Carey Jr. recently cut his final list to five schools: Duke, Kentucky, Michigan State, and North Carolina. He announced he would visit Kentucky for the Blue/White game, just after heading to Duke for their version of Big Blue Madness.

Hopefully Duke does something similar to Grayson Allen’s… whatever the hell it was… last year right before he heads to Lexington:

Our captain @GraysonJAllen chose the Crazies’ fave song for his intro and they were like ?????… pic.twitter.com/nzzpq8J6UH