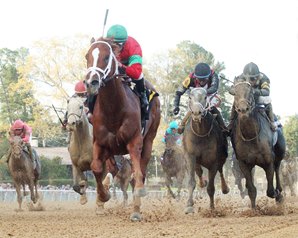 We have some shake-up to the Elite Eight this week following last weekend’s surprising result at Oaklawn Park where trainer Todd Pletcher unseated Bob Baffert, who had won 6 of the last 7 runnings, from his Rebel Stakes throne.  Malagacy, a son of 2011 Preakness Stakes winner Shackleford, upset the heavily favored Baffert trainee American Anthem and Bob Lewis winner Royal Mo with a solid, if not spectacular, 2 length victory.  The win necessitates Malagacy’s inclusion on this list as well as the dismissal of both American Anthem and Royal Mo after their dismal performances.  Without further adieu, your Kentucky Derby Elite Eight for the first week of spring:

# 1 – McCraken shipped from south Florida to Kentucky and posted a splendid 5 furlong work-out at Keeneland on Monday in one minute flat.  His reputation was flattered when the horses he beat in the Sam Davis came back to sweep the first four spots in the Tampa Bay Derby.  The Ghostzapper colt’s strong works indicate the ankle flare up that kept him out of a start in the Tampa Bay Derby is no longer an issue.  He is expected to make his final Derby prep in the Bluegrass at Keeneland on April 8th.

# 2 – Gunnevera returned to the work tab on Saturday with an easy maintenance breeze, his first recorded move since his Fountain of Youth success.  The son of Dialed In is expected to make his next start in the Florida Derby on April 1st.

# 3 – Tapwrit jumps two spots this week despite being idle.  The feeling is that the company he has kept this year may be among the strongest groups of horses in the country.  The form of the Sam Davis, where he finished 2nd to McCraken, was upheld in the Tampa Bay Derby despite the appearance of a couple highly regarded new shooters.  His win in that spot and the belief that he simply has more stamina than Practical Joke elevate him above that foe and into the top 3.

# 4 – Practical Joke has a very impressive resume, as was mentioned last week, and deserves his spot on this last based on his accomplishments to date.  He put in a solid half mile breeze at Palm Meadows training center on Saturday in :48 and 3, his first work since his runner-up effort in the Fountain of Youth.  Trainer Chad Brown is still contemplating this colt’s next start – either the Florida Derby at Gulfstream Park or the Bluegrass.  Wherever he ends up, going 9 furlongs for the first time should give us a good line on whether he will be able to handle the 10 furlong distance of the Kentucky Derby several weeks later.

# 5 – Malagacy remained perfect winning the Rebel Stakes on Saturday in just his 3rd lifetime start.  It’s difficult to tell how much stock should be put into this race.  West coast invaders Royal Mo and American Anthem were relative no-shows, finishing 9th and 10th respectively.  Smarty Jones Stakes winner Uncontested faded to eighth after leading through the first 6 furlongs.  Regardless of whether those horses just had off days or maybe are not as good as once thought, Malagacy is now an undefeated son of a Classic winner with a 2-turn Grade 2 stakes win on his resume.  His next start will likely come in the Arkansas Derby, and he is so lightly raced that we should expect to see further improvement there.

# 6 – Girvin did not originally make this list following his Risen Star victory at Fairgrounds.  He tracked in mid-pack and made a solid late run to win the race going away by a 2 length margin.  He did not appear to have beaten much that day, but with many other seemingly accomplished contenders continually producing sub-par results, he ends up in this spot almost by default.  He has produced two very nice works since that victory, with Oaks winning jockey Rosie Napravnik (wife of trainer Joe Sharp) in the saddle for each of them.  Girvin is another colt that is lightly raced and appears to be improving at the right time.  He is pointing for the Louisiana Derby on April 1st as his final Kentucky Derby prep.

# 7 – J Boys Echo won the Gotham at Aqueduct in his most recent start.  Similar to Girvin, the field he beat that day was suspect, and we will find out more about this well bred son of Mineshaft when he faces stiffer competition in either the Wood Memorial or Bluegrass Stakes in his next start.

# 8 – Classic Empire falls to the bottom of this list following his refusal to break off and work during a scheduled breeze this past weekend at Palm Meadows.  The reigning 2yo champion was then shipped to Ocala where he returned to the work tab this morning at Winding Oaks Farm with a 5 furlong breeze in 1:01 and 2.  Trainer Mark Casse now plans to ship the colt to Keeneland where he thrived in his training last year.  Things have not gone well for him over the winter in Florida, and perhaps a change in scenery will get him in the right state of mind for attending to the business at hand.  While it may be a long shot for him to make the Derby given this continuing string of set backs, he remains the most accomplished horse in this 3yo crop, he is bred to handle the mile and a quarter, and he is undefeated in two starts at Churchill Downs.  If things go well at Keeneland and he can gain a useful, fitness building start in the Bluegrass, this horse can still win the Derby against what looks like a very average crop thus far.

There are 3 Kentucky Derby prep races this coming weekend.  The UAE Derby in Dubai will be run at approximately 9:25 EST on Saturday morning, part of one of the highest quality international race cards of the year – Dubai World Cup day at Meydan Racecourse.  NBC Sports Network will carry live coverage of the last 4 races on the card, including the $10 million Dubai World Cup featuring Breeders’ Cup champion Arrogate, beginning at 10:30am EST.  These races are must-see TV for any thoroughbred racing fan.  The UAE Derby includes last year’s Breeders’ Cup Juvenile Turf runner-up Lancaster Bomber as well as the Todd Pletcher trained Master Plan.  While the race generally produces a starter for the KY Derby, the winner has rarely been competitive at Churchill Downs.

The Spiral Stakes will be contested at Turfway Park on Saturday night.  The race has rarely been relevant since the track surface was changed to polytrack in the mid-2000’s, but it did produce KY Derby and Dubai World Cup winner Animal Kingdom in 2011.

The Sunland Derby will be run Sunday afternoon at Sunland Park in New Mexico.  It was not run in 2016 due to an outbreak of Equine herpesvirus.  Firing Line, runner-up to American Pharoah in the Kentucky Derby, won the race in 2015.