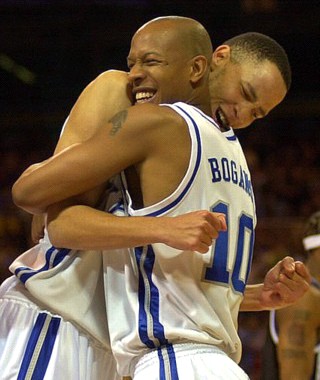 The University of Kentucky announced today that it will induct six new members to its Athletics Hall of Fame this fall. Headlining the group is former basketball standout, Keith Bogans.

Bogans is joined by:

Moore played linebacker on the UK football team before an eight-year career in the NFL. He was named First Team All-SEC by both the AP and Coaches in 1993, his senior season, earning him Mr. Irrelevant honors as the last pick in the 1994 NFL Draft.

Shumpert was a standout on the UK Baseball team, where he ranks third in school history in stolen bases with 66. He was drafted in the second round of the 1987 MLB Draft by the Kansas City Royals and played 14 years in the bigs.

The older sister of former men’s tennis star Jesse Witten, Sarah Witten ranks as the only player in UK women’s tennis history to earn three consecutive All-America selections. She is also one of only two players with four career All-America accolades, one in singles in 2003 and three in doubles in 2001, 2002, and 2003.

The six Wildcat greats will be inducted in late September during Hall of Fame Weekend when Vanderbilt comes to town for a football game.