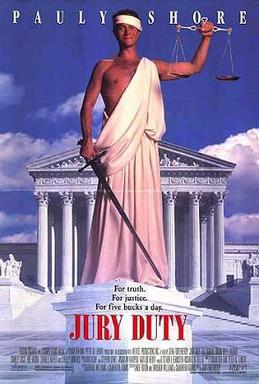 No, not the Pauly Shore movie; the real kind of jury duty. That’s what I have going for me after today, my last day of freedom.

You see, tomorrow morning, I will rise from my bed earlier than usual and I will put on pants, only because the law demands I do so. I will then make my way downtown to the Fayette County Courthouse, where my identity will be thrown out the window and I will be referred to by my juror number and my juror number only. Those four digits will be my name from tomorrow morning through the entire month of November.

And I’m really not looking forward to it.

How I’ll operate the blog from inside the courtroom, I really don’t know. Hopefully I don’t get called. But if I do, I will be the best juror the state of Kentucky has ever known. Remember Darnell Dockett of the Arizona Cardinals, live tweeting his jury duty around this time last year? I probably don’t have the balls to go that far, but I’ll think about it.

Until then, I will enjoy this last morning with no obligations and responsibilities within my state government. Because it all ends tomorrow when I begin my sentence as a juror, one of the most important duties we have as Kentucky citizens. I will serve with pride and I will serve impartially, exercising sound judgment and integrity, all while wishing I could be anywhere else in the world.

Mark Stoops will speak on the SEC Coaches’ Teleconference.

Stoops will make his weekly brief statement via phone to the outstanding media members around the Southeastern Conference. He rarely gives too much away on the call, but we’ll be tuned in just in case.

We will hear from D.J. Eliot and members of UK’s defense after today’s practice.

The new KSR Football Podcast to be released today.

Tyler and I were busy with the Blue-White game, so Nick, Freddie and Jared were left alone to record this week’s podcast. I have no idea how far off topic they strayed, but I’m sure we learned some new bizarre fact about Freddie, as we always do.

Look for it around one o’clock here on the site.

More importantly, we are one game closer to the end of baseball season.

How old is too old to be jealous of these youngsters behind UK’s bench last night? Asking for a… um… friend.

John Calipari did not see what it takes to win last night.

In case you missed it from his postgame comments, Calipari did not see a winning formula in last night’s Blue-White scrimmage. He said, “There was good stuff I saw, but at this point as a coach you’re looking at this not–all right–this was okay, what do we have to do to try to win? What do we have to look like? And let me just say: it’s not that, what I saw.”

Cousins will make his season debut tonight against the Los Angeles Clippers, along with Rajon Rondo and Willie Cauley-Stein. Time to sign up for League Pass.

Davis went 4-for-20 from the field in the loss to the defending champion Warriors last night. He finished with 18 points and six rebounds, well below his season averages from a year ago, and five turnovers.

KSR radio coming up in an hour…