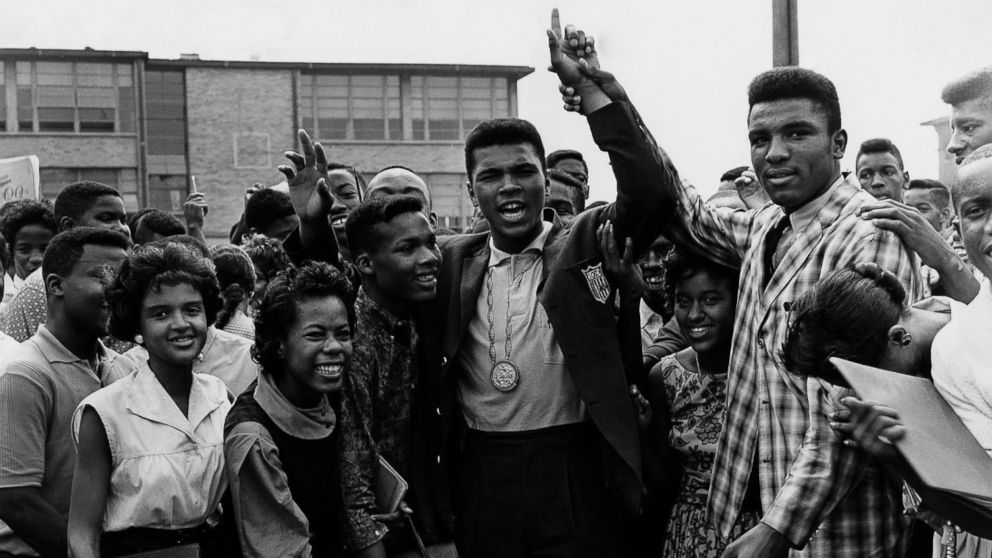 Cassius Clay celebrates his 1960 Gold Medal outside of Central High School via AP.

My first Saturday morning shift in June got off to a rough start.  The internet at my house was on the fritz.  Luckily, I was wise enough to wake up earlier than usual to prepare for a day filled with posts.  For some reason, 840 WHAS was on the radio of my 1996 Ford Escort as I made my way to the Wi-Fi at Panera Bread.  What I heard shook me to the core.

I feared for the worst the night before, but never thought it could actually happen.  I couldn’t take the car out of park.  My hometown hero, The Greatest of All Time was dead.  The only response I could muster were tears.  I wept for a man I never met, a man who could not speak during my lifetime, but a man from my town who shocked the world.

After shaking off the cobwebs, I proceeded to put on my game face for my greatest moment, an opportunity to honor The Greatest.  The following week was surreal as thousands made the pilgrimage to Louisville.  I was one of many who felt it necessary to pay my respects at the Ali Center.  Instead of seeing his procession through Louisville firsthand the following Friday, I was tasked to host Kentucky Sports Radio for the first time.  A dream fulfilled, I worried I would not provide an adequate show to respect The Greatest.  When the “On Air” light lit up, all nerves went away.  Before big moments, I always tell myself, “You got this.”  On that day, they were Ali’s words, not mine. It’s hard to encapsulate what happened to the city of Louisville for a week in the early summer of 2016.  However, ESPN’s Tom Junod does it as well as anybody possibly could, capturing the spirituality and serenity that crept over the city.  The following excerpt describes how difficult it was to prepare a funeral for a person who belonged to the world.

So the question is not how big the funeral is going to be, nor how many famous people can be accommodated, but to whom does Muhammad Ali belong?

He had that kind of soul, the kind people claim for themselves, so burying him requires sorting through any number of constituencies. He was a husband and a father. He was a citizen of Louisville; he was a citizen of the world. He was a proud black man who held the truth of his own beauty self-evident; he was offered — especially in his later years when he had been made safe by silence — as the embodiment of post-racial possibility. He became a global figure not when he became heavyweight champion of the world but when he changed his name from Cassius Clay to Muhammad Ali, exchanging the name of a proud young man for a name that made his people proud. He was a Muslim, devout and conservative, and he was a celebrity who tended to speak of himself in superlatives. He never stopped calling himself The Greatest and he never stopped saying God is great, and he somehow reconciled those assertions.

The city has taken steps to honor Ali around the anniversary of his death. The “I Am Ali” Festival began today and will span six weeks at the center that bears his name along the Louisville riverfront, honoring a different one of his core principles each week.  In the world of sports wear Ali vaulted to the top of the world, the Louisville Bats are wearing jerseys tonight bearing his image.  Next month, a title boxing match will be held in Freedom Hall, the place where Cassius Clay won his first professional bout.

It’s not all positive.  In the year since his passing, the bliss surrounding the non-violent aftermath has left Louisville.  A violent Memorial Day weekend was capped off with a shooting in a crowd at The Big Four Bridge.  His childhood home was turned into a museum just before his passing, but within a year the owners say they may have to shut it down due to a lack of funding.

Muhammad Ali’s passing brought out the best of Louisville.  Maintaining his message for peace and striving for greatness has not been easy since, but it is not impossible, for Ali taught the world impossible is nothing.