There is an ample void at Pimlico this week with neither Derby winner contesting the Preakness Stakes on Saturday.  Country House got the sniffles after his victorious runner-up finish in Louisville.  Rather than further proving his mettle on the race track, Maximum Security is bedded down at Monmouth Park while his owners seek retribution in the courtroom.  Alas, this decade will not see a third Triple Crown winner like we had in the 1970’s.  However, the absence of the first four horses to cross the finish line in the Derby does make for an interesting betting race in Saturday’s Preakness.  Here is a look at the middle jewel of racing’s Triple Crown along with a few of the stakes races on the undercard: 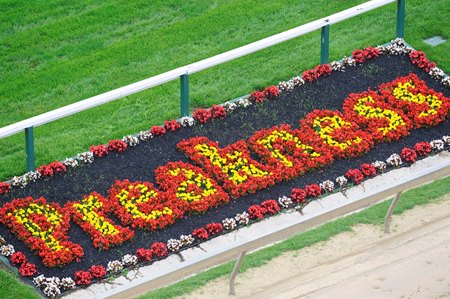 Photo courtesy of the Bloodhorse.

Real News appears to have a decided pace advantage as he exits a solid runner-up effort behind Breeders’ Cup winner Bulletin in the Palisades at Keeneland.   Rosario should have him on the muscle from the break and he could prove tough to catch in a relatively paceless affair.  Thomas Shelby was a $525,000 2yo purchase last March, and the son of Curlin makes his grass debut in this spot.  His best efforts to date have come over the synthetic surface at Turfway, indicating the lawn may be to his liking.  Wesley Ward excels moving his pupils from the main track to the grass, and this one could surprise at 12/1 on the morning line.

Osare makes her 4yo debut for Jonathan Thomas and the half-sister to Arrogate figures to have plenty of upside with only 4 career starts to her credit.  It won’t take a stratospheric leap forward from her Dueling Grounds Oaks performance at Kentucky Downs last summer to find the winner’s circle in this spot.  She is training well, and Thomas can definitely have them ready to run off the bench.

Jo Jo Air made a big leap forward taking the William Walker against fellow sophomores on opening night at Churchill, besting Breeders’ Cup winner Bulletin among others.  She fired a 5 furlong bullet in the interim in :59 and 1 around the dogs at Keeneland.  This filly is doing well right now, and Ward is a “run them when they’re right” kind of trainer.  Expect this Scat Daddy filly to best her elders and look good in the process.

Joel Rosario looks well positioned once again to ride pillar to post in a two-turn contest on the Pimlico lawn.  Mitchell Road reeled off 3 straight over 3 different race tracks this winter, most recently edging Beau Recall in New Orleans.  That Brad Cox trainee came back to capture the Grade 2 Distaff Turf Mile on the Derby undercard.  The Bill Mott trained daughter of English Channel should offer good value with the presence of two Chad Brown fillies in this spot.  I’m So Fancy was successful earning Group 3 accolades in Ireland and makes her 5yo debut on this side of the pond for the very capable Arnaud Delacour.

Pyron and Preamble look well positioned to battle it out in deep stretch and pick up the pieces left by likely pacesetters Malpais, Cabot, and Gladiator King.

If there was an award for 2nd half 3yo champion, Catholic Boy would have taken last year’s prize.  The More Than Ready colt reeled off three impressive conquests capped by grade 1 mile and a quarter coups on both turf (Belmont Derby) and dirt (Travers).  His versatility on this surface should serve him well, but he will need to bring his running shoes to find the wire in front of Inspector Lynley who has 2 wins from 3 starts already this term.

Improbable and War of Will will vie for favoritism as the two highest finishing Derby runners contesting this middle crown jewel.  War of Will had a much debated, compromised trip in Louisville.  Whether that was of his own doing or that of the first place finisher, the War Front colt did appear to be full of run rounding the far turn.  Negotiating a cleaner trip this time around may not prove to be a trivial task as his poor luck at the Derby draw followed him to Baltimore.  Mark Casse must be pulling his hair out.  Improbable didn’t really have an excuse, but can definitely benefit from the cut back in distance.  With 7 victories to their credit, no team is better than Bob Baffert and Jimmy Barnes at bringing a Derby runner to the Preakness.  Local hopes rest with Alwaysmining who has reeled off six straight across town at Laurel Park.  In one of those wins he beat the re-opposing Win Win Win (beaten 8 1/2 lengths in the Derby) by a length and a half.  Another victory saw him best Gray Magician, dead last and 26 lengths adrift in the Derby, by a widening 4 1/4 lengths.  Anothertwistafate did not have the greatest of trips in the Lexington at Keeneland, and is among the more intriguing new shooters.  The Scat Daddy colt should get a nice stalking trip from his outside draw.  Chief amongst the group of non-Derby starters are Owendale, a powerful winner of the Lexington, and Bourbon War, who competed admirably in the preps at Gulfstream that proved to be strongest on Derby day.  Owendale affirmed his readiness for this appointment with a :59 and 1 bullet at Churchill last Saturday for Brad Cox.  He looks like a very live shot to upset in Cox’s first appearance in a triple crown event.