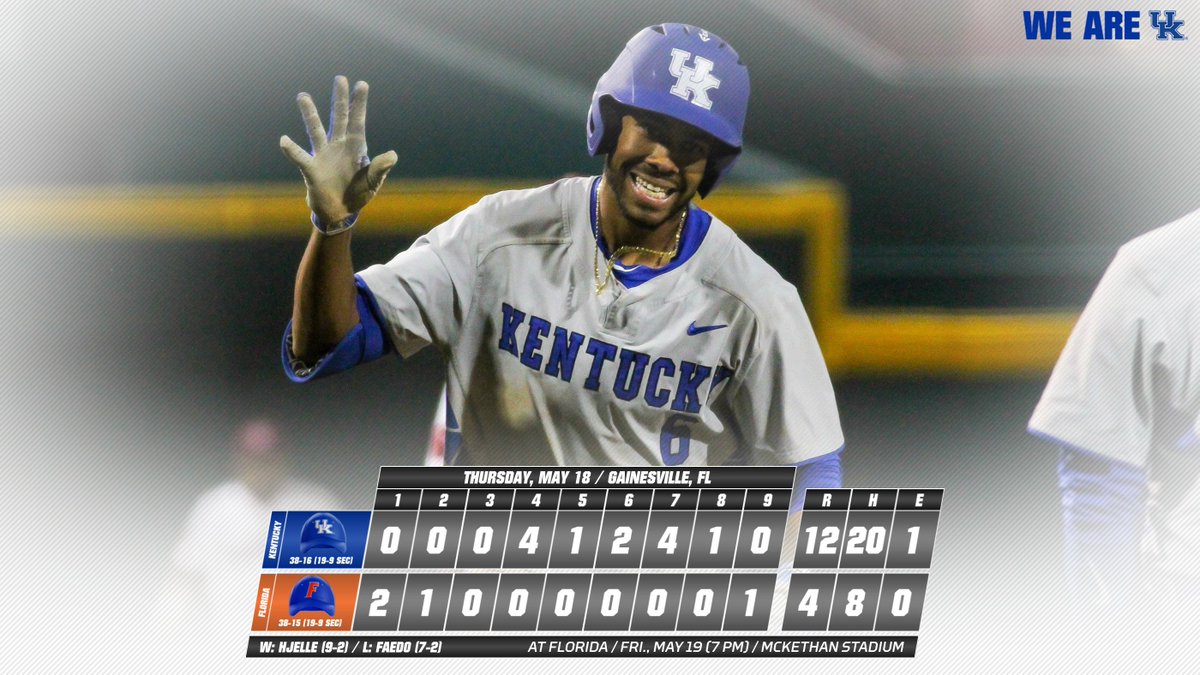 Drew here, running a little behind because I fell victim to the ol’ time change. I’m in Madisonville today and forgot that the 9 am morning post is an 8 am morning post when I do it from here, but I rallied the troops and got back to the laptop in time to put some words on the internet for you this morning, with many, many, many more to come throughout the day and night. So let’s get right to it…

Playing for a nationally televised audience on ESPN last night, the Kentucky baseball team whooped the fifth-ranked Florida Gators, 12-4, against one of the SEC’s best pitchers. Tristan Pompey’s fourth inning grand slam got it going and the Cats never looked back in the series-opening win. Now the club is tied for first in the conference and can clinch the crown tonight in the second game of the series in Gainesville, which will get started tonight at 7 pm and will air on the SEC Network.

On the other diamond, the UK softball team plays hosts to DePaul this afternoon in Lexington as the No. 14 overall seed in the tournament. Illinois and Marshall are also in Lexington to decide which team will advance to the Super Regionals via the double-elimination round. Today’s game is set for 2:30 pm and you’ll have to log in to ESPN 3 to catch the action.

The paperwork is in and approved for the three spring additions to next year’s basketball roster. Of course I am talking about Kevin Knox, Jarred Vanderbilt and Jemarl Baker, who Coach Cal spoke about in length in a video to announce their signings Thursday afternoon.

Kentucky’s final 2017 class has seven members, although the roster will not be complete until we learn the futures of Hamidou Diallo and Pitt transfer Cam Johnson.

4. Hamidou Diallo rumored to be doing his deciding today.

We may not know what Hamidou Diallo decides for his future today, but word on the street is he has today circled on his calendar as the day he will sit down and figure it out. Matt said earlier this week that he now thinks there is a 60 percent chance Diallo returns to school; I can’t put a number on my opinion, but I do think yesterday’s meeting with the Brooklyn Nets will be the deciding factor. If Brooklyn assured him they will pick him with one of their two late first round picks, I think the kid’s gotta go and try to be the hometown star. If it were me, I’d take playing in my own city (New York) over coming back to college and trying to improve my stock. But who knows what Brooklyn told him; I guess we’ll find out soon enough.

North Carolina has jumped in the Cam Johnson sweepstakes, but there’s one small caveat in Johnson’s release from Pitt that will likely keep UNC out of the hunt. Johnson will have to sit out a year if he transfers to another ACC school, per the release from Pitt. Any other conference and he can play immediately, therefore you gotta think the Tar Heels are behind Arizona, UCLA, Kentucky, etc. in the fight.

6. I told myself I wouldn’t share any Chris Cornell stuff, and then I heard this…

After the news of Chris Cornell’s passing yesterday, I decided to let the rest of the internet share his greatness because I knew it would be everywhere. But last night I listened to a Chris Cornell playlist during a long drive across the state and discovered this gem I had never heard before, and it’s incredible…

The latest details of Cornell’s death make the story much, much sadder.

7. Are you ready for the Preakness tomorrow?

Confession: I’m terrible at betting the ponies and I know very little about tomorrow’s race. So maybe we’ll do a preview of it a little later today. It’s a Friday and I have the site all day — what else do we have to do?

Herbstreit made his first career KSR appearance to clarify his comments about Kentucky football being an appetizer to the real thing. He says it was taken out of context and he has nothing but love for Mark Stoops and the Cats. Hear for yourself:

9. Ryan Lemond to host KSR today while Matt Jones in on a bachelor party.

The proverbial wheels are about to proverbial fall off in the Lexington studio this morning. I would help him out, but I am also out of town, so I think he called in the lefty to help him out for the two hours. Either way, prayers for KSR radio.

Mohambed Bamba picked Texas yesterday, in case you hadn’t heard. You can read my instant thoughts on the surprise decision here.