Today at approximately noon o’clock, Donald J. Trump will be sworn in as the 45th President of the United States. From that moment forward, for the next four years, he will be the most powerful man in the world. Love him or hate him, support him or loathe him, today he becomes our Commander In Chief — and the first to have had a small cameo in the Home Alone franchise.

Now I know mentioning politics is a surefire way to spark a never-ending argument between several anonymous posters in the comments section, but I simply can’t ignore the changing of the guard in the White House on this big day. Trump’s America is open for business around your lunch break, so plan accordingly. It’s a new day.

To the morning notes and thoughts…

1. Bob Knight thinks Donald Trump could be the best president ever.

Keeping the presidential theme for one more moment, Bob Knight, everyone’s favorite curmudgeon, believes Trump could go down as our best president.

“He’s going to be as good a president as we’ve ever had, and maybe the best,” Knight told TMZ.

As far as I know, there was no bodily harm to country music singer Justin Moore, who went on a Twitter tirade after Kentucky beat Arkansas earlier this month.

Look forward to kissin and makin up with one of my fav places to play, KY, tonight in Corbin. #nomoredrunktweets, I promise cat nation. ðŸ˜œðŸ»

And then he broke out the UK shirt during the show: 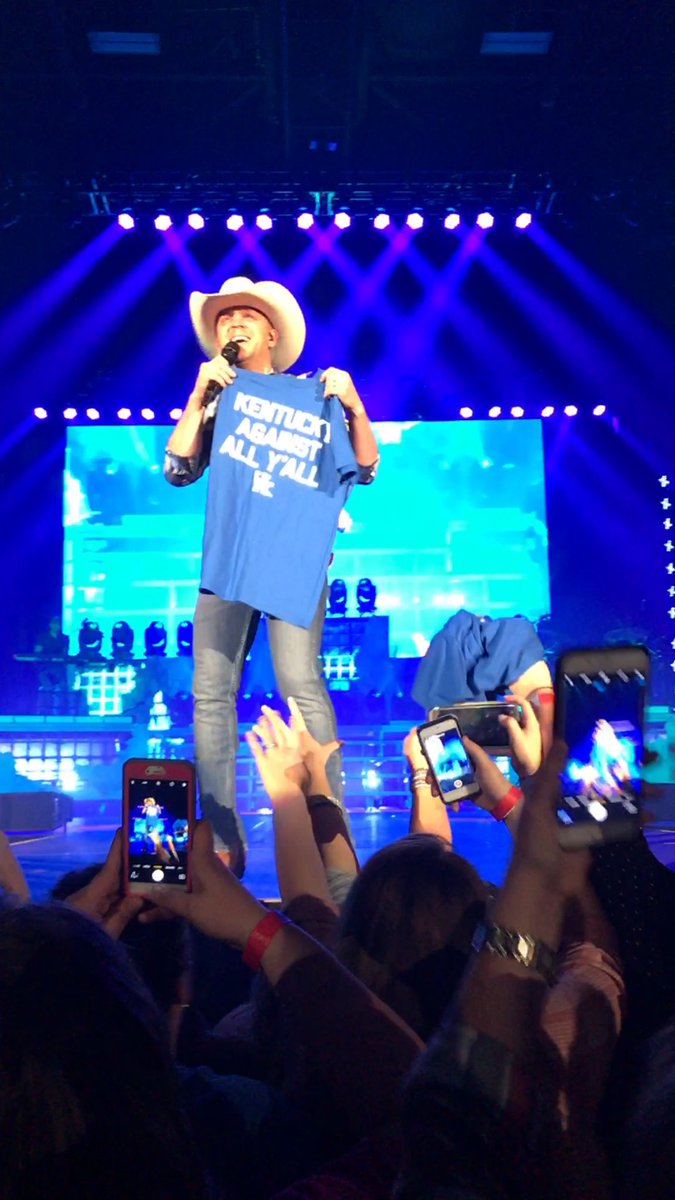 He can play a hundred Corbin shows and issue a hundred promises and hold a hundred UK t-shirts, but it’ll never take back the night Big Blue Nation put him in an online body bag.

3. DJ Eliot to begin new gig at Colorado today, but not before issuing a statement to UK fans:

“I would like to open by thanking Mitch Barnhart, the administration, the Lexington community and all of the Big Blue Nation for their support and dedication to Kentucky football, and their support of me, my family and our players.  I would like to thank the players for their commitment to the vision, giving 100% every day and competing like the quality men they are growing into.  They poured their hearts into the last year and I am so proud of them. Finally, I would like to thank Coach Stoops for the opportunity, for his trust, all that I learned from him, and most importantly for his friendship.  Coach Stoops and his family have been a part of my life since my playing days at Wyoming and will remain a part of my life into retirement.  I am thankful for all he has done for me and proud of what we have accomplished here at Kentucky.  We leave with positive memories of our time in Kentucky and of the milestones we celebrated in our kids’ lives and wish you all very much continued success.”

A press release in Boulder said Eliot will have a three-year deal with the Buffs — or whatever they’re called out there.

Good in home with @UKCoachStoops yesterday

Yeast, who is the son of former UK great Craig Yeast, has been committed to Louisville since October, but Stoops’ visit suggests he is going to fight all the way to National Signing Day for the player he once had wrapped up.

5. Want to advertise on KSR?

We have a new website opportunity available immediately. Send an e-mail to Maria at [email protected] for more information. Serious inquiries only please. She’s really busy keeping us in line.

And that is all I am going to say about that.

If that proves to be true, which it won’t, it will be only the third time this season that Kentucky failed to reach 80 points. The others were Michigan State (69) and Louisville (70).

8. Flashback Friday: That time Calipari was ejected in Columbia.

Let’s throw it back to last season when Coach Cal got tossed against the Gamecocks:

9. We will hear from Calipari later today.

Coach Cal will hold his pre-South Carolina press conference around 2:00ish this afternoon to look ahead to tomorrow’s first place game and, I assume, say something about the release of his latest Cal Cast. As always, we will have a live video stream and all of the notes and quotes here on Kentucky-Sports-Radio-dot-com. So stick around.

10. Today’s radio show will be cut short for inauguration coverage.

Be ready for your favorite morning show to go off the air around 11:35 am today as the station turns to live coverage from Washington DC. Matt did not like my idea of selling today’s show as the KSR inauguration pregame show.