The second week of Keeneland’s fall meet kicked off on Wednesday with a card that featured the last ‘Win and You’re In’ race for this year’s Breeders’ Cup.  Rushing Fall put on a dominant performance in the Grade 3 Jessamine Stakes, making up nearly 10 lengths on her rivals in the latter stages to win going away.  After galloping along near the rear of the field early on, Rushing Fall began picking up the pace significantly around the clubhouse turn moving from 9th, 6 lengths back of the leader after 3/4 of a mile, to finish more than 3 lengths ahead of runner-up Stainless.  She will certainly be amongst the favorites in the Breeders’ Cup Juvenile Fillies’ Turf off that powerful performance.

Friday’s 10 race card includes plenty of overflow fields with nice wagering opportunities.  The 5th race features a full field of 2yo maiden fillies with four of the primary contenders exiting the same race at Churchill Downs.  That September 16th event took place over 6 furlongs, and the fillies from that race will try to stretch their stamina an extra sixteenth of a mile today.  The runner-up finisher from that race, Classy Act, came back with another strong effort here on Wednesday when she led every step but the last when going a mile on the main track.  That effort makes Flash n’ Dance look pretty formidable in here as she finished 3rd in that race at Churchill, just a head adrift of Classy Act on the wire.  She was drawn wide that day, as she is in here, but used her speed to beat Trust to the lead and then put that rival away through the stretch before being collared by the top two late.  The two swap gate positions this time, with Trust just inside of Flash n’ Dance, but one would certainly expect both fillies to be sent hard to gain position early, where they are likely to vie for the lead with Dagney’s Warrior who is drawn on the rail and showed ample speed from the far outside in her debut run.  A 3 horse speed duel in front should set things up quite nicely for Pinot and Tell Your Mama, the 7th and 4th place finishers from that September 16th heat in Louisville.  Both made off-the-pace runs in that debut spot, with Tell Your Mama emerging as the more impressive of the two on that occasion.  However, Pinot could offer significant value at twice the morning line of Tell Your Mama.  Kellyn Gorder horses often show significant improvement in their second starts, and the filly put in a very impressive work over the local track when her :47 and 3 half-mile drill was the 8th fastest of 123 works at the distance last Saturday. 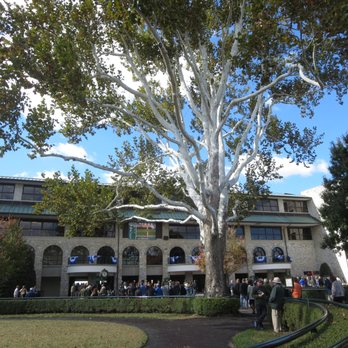 The 6th race at a mile and a sixteenth on the grass for older fillies and mares features a significant class dropper that seems like a pretty logical single in the pick 5, the lowest priced bet on Keeneland’s wagering menu with only a 15% takeout.  Linda spent most of this year in graded stakes company, knocking heads with some of the best filly and mare turf runners in the country including Celestine, Roca Rojo, Dona Bruja, and Miss Temple City.  Trainer Ian Wilkes gave her a brief freshening after a 2nd place finish at Indiana Downs in July, and she returned in a Grade 3 at Kentucky Downs last month where she filled the show slot behind Miss Temple City and Zipessa.  Zipessa came back to win the Grade 1 First Lady here on Saturday.  Linda is a graded stakes winner herself as she took the Grade 2 Mrs. Revere at Churchill last November following a nice runner-up effort in the Grade 3 Valley View here at Keeneland.  In a race without much pace, she has enough tactical speed to insure herself of good positioning and a clean trip under Brian Hernandez Jr.

The 7th is a 7 furlong allowance for juvenile colts and geldings.  Trappezoid is only eligible for this race because he ran for a $75k claiming tag when defeating similar company three weeks ago at Churchill.  He gets the nod in here as the only horse in the field with two wins, both of which were fairly professional off-the-pace efforts.  That style should work well for him again today as Promises Fulfilled and Nickie’s Papa both look poised to set a fast pace.  Promises Fulfilled could be something special for trainer Dale Romans.  He won by a comfortable 4 lengths going gate-to-wire in his debut, and the runner-up finisher from that race, Rubus, broke his maiden here on Saturday.  The Shackleford colt also posted a strong :59 and 4 bullet work at Churchill on Tuesday in preparation for this.  Dreamer’s Point is another that might benefit if a testy speed duel develops up front.  He came from near the back of the pack to take his debut at Ellis last month.  Psychoanalyze looked to be in over his head against graded stakes company at Saratoga.  He could certainly show improvement with the addition of Lasix, as the running line makes it look like he may have bled in the Hopeful.

The Grade 3 Franklin County, a 5 1/2 furlong turf sprint for fillies and mares, goes as the featured 9th race.  Miss Ella, the defending champion, drew the rail.  She has obviously shown an affinity for the Keeneland lawn, and she is a very consistent performer at the 5 1/2 furlong distance with 5 top 2 finishes in 6 attempts.  There should be enough speed signed on here to set up her late rally.  Kasuga will certainly make her presence felt early, and she merits considerable respect coming from the Bill Mott barn.  She spent most of the year at Woodbine, where she nearly took the Grade 3 Royal North field gate-to-wire.  The cut-back in distance and rider change to Julien Leparoux are both in her favor as well.  Pressuring her near the front will be Ruby Notion and Morticia.  Ruby Notion was less than three lengths behind the brilliant Lady Aurelia in the Giant’s Causeway over this same course in April.  Morticia is a perfect 4 for 4 on the grass at distances less than 6 furlongs.  Always Thinking will also benefit from a torrid pace up front.  She exits a stakes win at Laurel Park where she finished in a blazing fast 1:07 and 3 for 6 furlongs.  Nobody’s Fault is capable of upsetting these from off-the-pace as well.  She owns some nice finishes against several of the top contenders, most notably splitting Lady Aurelia and Ruby Notion here in April.  Lull tops the plethora of contenders in this spot.  While the distance could be a tad short for her, she did break her maiden going 3/4 of a mile and she enters this off a 2-length victory in the Kentucky Downs Ladies Sprint going 6 1/2 – beating Morticia in the process.  She has the perfect stalking style for this pace scenario as she possesses enough speed for Hernandez to keep her settled just behind the top 3 where she can get first run on the deep closers.

Best of luck on Friday and don’t forget to check back tomorrow for a look at Saturday’s card featuring the Grade 1 Queen Elizabeth Challenge Cup.

1 Comment for Friday the 13th at Keeneland, presented by Pocket Aces Racing