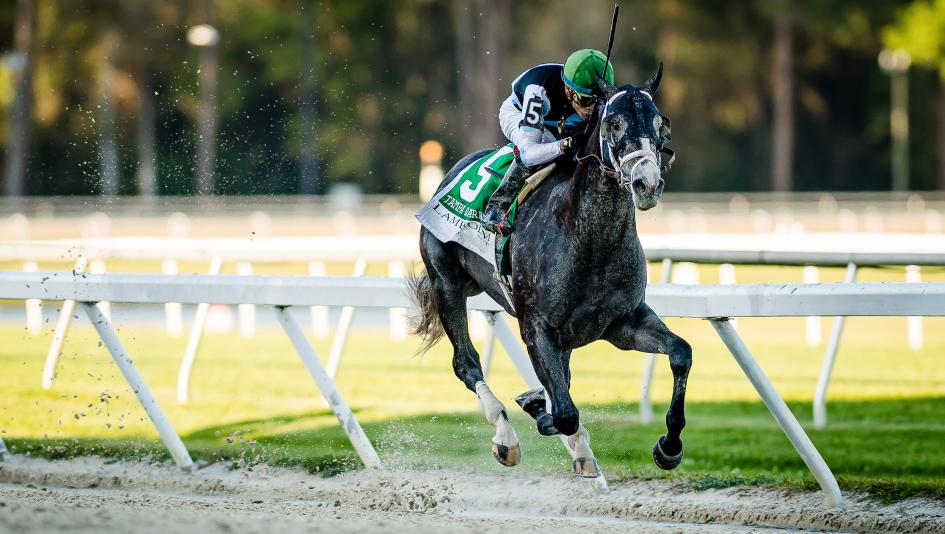 Conversation around the Commonwealth is different this week.  The greeting is “Happy Derby,” quickly followed by the question, “Who’s your horse?”

If you’re looking for expert analysis, you’re looking at the wrong place.  I try to make my selections based on personal connections because I hear it’s better to be lucky than good.

He has the stamina, he’s won in the mud and has great value at 25-1.  Pictured above, he’s also one of the prettiest horses I’ve ever seen.  He’s black, but with a little salty gray sprinkled in there that changes as the light bounces off him at different angles.

If those aren’t enough reasons to place a $2 Win/Show bet, his daddy Tapit lives about a quarter of a mile away from my college roommate.

A tequila-lover’s dream, Cinco de Mayo and Oaks fall on the same day this year.  Three Oaks horses are aptly named for the occasion.  Wicked Lick (30-1), Salty (6-1) and Tequilita (20-1) are the perfect trio for multiple exotic bets.  You can feel froggy and try a trifecta but I recommend a $1 exacta.  If it hits, you have at least one longshot to make some bank.

There’s been a few things most recent Derby winners have shared in common: they close well and they’re often won by first-time winners.  Hence (15-1) fits both criteria.  Trainer Steve Asmussen is due.  He also looks like a long lost Ryan brother.

Don’t tell me Steve isn’t related to Rex and Rob Ryan, via SI.

McCraken’s record at Churchill is why he’s a fan-favorite, but he’s one of my favorites because of his name. There’s so much versatility.  I don’t know whether to call him Phil McCraken or simply exclaim, “RELEASE MCCRAKEN!”

As you saw last Saturday, I just watched Braveheart for the first time.  Every time I see Irish War Cry I think Gibson’s William Wallace is his distant cousin living on the adjacent island.  Irish War Cry is also one fine-looking horse.  Both 8-1 horses will be featured in one of my exactas.

One of the Oaks’ favorites (5-1) shares a name with one of my favorite professors, Dr. Mike Farrell.  This year Dr. Farrell was inducted into the Kentucky Journalism Hall of Fame.  IT’S FARRELL’S YEAR!