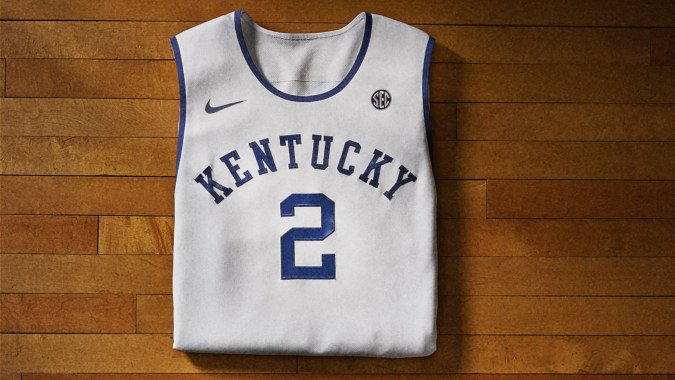 Kentucky basketball is playing like one of the four best teams in the country right now, and it is hard to find a complaint. PJ Washington is finally playing like a top player in the country, Keldon Johnson unleashed his DAWG last night, Tyler Herro seems to be doing all the right things, the defense is back playing the way it should be and Rupp Arena is FINALLY the atmosphere it needs to be.

But for me, the nitpicking kid from Gen-Z, there is one complaint that has been pretty consistent with most of the BBN. The jerseys. Now, I’m not one who necessarily hates the checkerboard down the side; in fact, I think the jerseys have looked a lot better since they decided to widen the shoulders. But, the trend this season in college basketball seems to be the throwback jerseys. I grant you this may be an odd post to do after we rocked Tennessee, but with seemingly every team unveiling their throwback jersey this week and my bi-weekly shift falling on this weekend, I figured why not.

I know there’s a portion of the fanbase that couldn’t care less what the Cats take the floor in, as long as they are winning, and I agree with that opinion to a degree. But in a generation now where recruits can be attracted by the smallest things, like jerseys, I feel like Kentucky needs to break out a throwback jersey, especially considering what other teams have already done. Plus, it’s a fantastic marketing tool, and if Kentucky ever had a retro look, they would fly off the shelves.

Kentucky rocked throwbacks in 2014 at Rupp against Florida, and everyone LOVED them. With how well this team is playing it’s time for Kentucky to join the trend and break out the retro look.

Here are some other teams that have retro uniforms (which makes me want Kentucky to jump on the trend even more).

Look, I understand why they have these throwbacks. It’s mostly in part to honor Michael Jordan, as UNC is basically a walking ad for the Jordan brand nowadays. But you’re going to tell me Kentucky couldn’t honor someone such as Dan Issel with a throwback?

Tennessee’s never been to a Final Four, and even they have a throwback jersey to commemorate… honestly nothing. I guess they’re just an excellent team this year and marketable enough to have a throwback, but I feel like Kentucky would be just as marketable of a basketball program. Who are we kidding? UK is WAY more marketable than Tennessee in basketball, and the Cats actually have history to honor. Oh yeah, and we killed them last night.

Look, I get it. This one championship in ’94, pig sooie and Bill Clinton are the only things they have. Of course, they’re going to want to honor their only important moment in basketball. But, Kentucky has eight national championships and 17 Final Fours – the Cats could just throw a blind dart to find a season commemorate.

That makes two blue bloods on the list, and Duke already brought back their cool uniforms from the 2015 season. Does Kentucky want to be left out of the ‘cool blue blood jersey’ party?

They had strippers, we didn’t, and they still got throwbacks. Next.

A closer look at v4 from our friends at @Jumpman23. #GatorsHoop pic.twitter.com/LGNFbQeqOD

Now this one BAFFLED me and made me realize Nike’s just giving out retro uniforms like candy. Georgia has no basketball history outside of one Final Four appearance in the 80’s and a conference championship the year a tornado ripped through Atlanta. But other than that, what else is there? Dawg Nation could say to me Georgia didn’t even have an established Division I basketball team until 2006 and I’d believe them, and they got a throwback jersey!?!? C’mon.

You get the point. It’s a cool thing for the players to wear, and every team is doing it. They look sharp and with so much rich history associated with Kentucky’s basketball program, you’d have to be foolish to not give a nod to the past with a cool uniform. Plus, fans of all ages would love them, and the jerseys would fly off the shelves.

27 Comments for Everyone else gets Throwbacks, Why Not Kentucky?