Jarren Williams announced his commitment to the University of Kentucky on Monday for the second time, ending a roller coaster of a recruitment for the Big Blue Nation. (Hopefully.)

When he committed the first time last summer, Williams was the first on the board from the Class of 2018. Then things got a little crazy, Cats fans panicked, and now all is right in the world again.

So as we get caught back up with Kentucky’s next big QB, let’s take a ride down Memory Lane in this timeline of events of the last year.

Williams and some other talented Georgia prospects made a trip to Lexington to check out the University of Kentucky in late March of Williams’ sophomore year, marking the beginning of a strong relationship between the program and the young recruit. 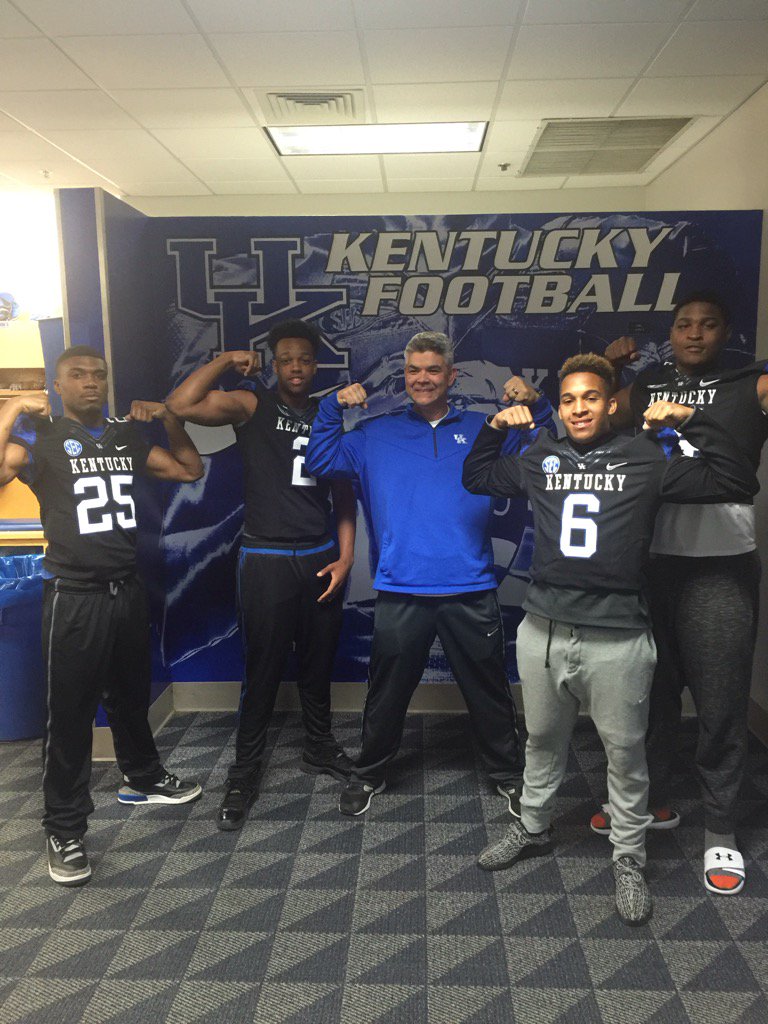 One day after visiting Kentucky, Williams and friends drove over to Louisville to check out the Cardinals’ Saturday practice. He left with a UofL scholarship offer, his first of many offers to come.

Lamar Jackson was one of the main drivers behind his early interest the Cards.

One week after receiving an offer from Louisville, Williams was extended a scholarship offer from Florida State during an unofficial visit to Tallahassee for a ‘Noles scrimmage.

As was the case with Lamar Jackson and Louisville, Williams liked what Jimbo Fisher and the FSU staff did with Jameis Winston.

April 16, 2016: Williams visited his home state school, the University of Georgia, for its spring game.

Williams made his first trip to Georgia for G-Day, the annual spring scrimmage.

A little over a month after his recruiting tour of the Bluegrass, Williams finally received an offer from the Wildcats. Darin Hinshaw, the lead recruiter for UK in Williams’ recruitment, made the trip to Central Gwinnett High School to extend the offer after seeing Williams had made some tweaks to his throwing motion at Hinshaw’s encouragement.

Days after Kentucky gave him his third scholarship offer before the summer after his sophomore year, the University of Colorado came through with a fourth offer.

Many more would follow South Florida’s offer throughout the month of May. On the 13th he received his sixth offer, from Colorado State, after Central Gwinnett’s spring game; West Virginia would offer on the 16th; Boston College and Maryland each offered on the 18th; followed by Houston on May 27th.

By the time June rolled around, Williams held 10 scholarship offers from around college football.

Now a hot QB name in the south, Williams made the trip back to Lexington in early June for one of Kentucky’s summer camps, where he stood out among all campers. 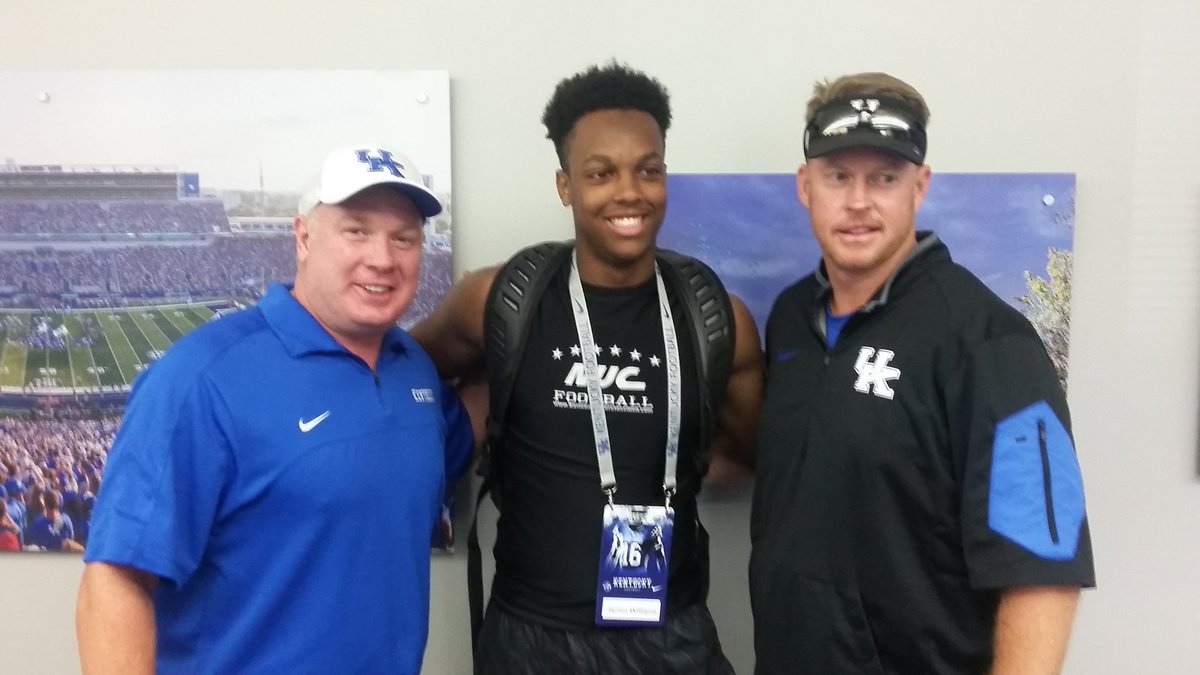 During a break in the action, Williams tweeted, “I’m loving it up here #BBN,” which further proved the momentum was moving in the Cats’ favor.

Ohio State and Mississippi State, as well as many others, were in Lawrenceville to watch Williams and his Central Gwinnett teammates in the high school’s elite football camp. OSU head coach Urban Meyer spent some one-on-one time with Williams going over some passing drills, but left town without offering a scholarship.

Williams took to Twitter to announce his commitment to the Wildcats, telling his followers, “After careful evaluation, I am excited to announce that I have officially committed to the University of Kentucky. I would like to thank my parents for their guidance and support throughout this arduous process. I would like to thank my head coach and all the coaches who played a role in my development. With that said, I am looking forward to joining my new family.”

Big Blue Nation exploded with excitement for the first commitment from the Class of 2018 and the future face of the program.

Williams returned to Kentucky once again to help recruit more talent from the 2017 and 2018 classes at UK’s Sunday Night Lights camp. Once a major UK target, Williams became a UK targeter and recruiter himself after announcing his commitment.

September 17, 2016: Williams visited Louisville and Kentucky in one day.

Although he was committed to Kentucky at the time, Williams was in Papa John’s Cardinal Stadium to catch some of ESPN College GameDay and Louisville’s Sept. 17 game against Florida State. He then made his way to Lexington to see Kentucky host New Mexico State in the Cats’ third game of the season, his first time in Commonwealth Stadium for a UK game.

Williams insisted the Louisville visit was only to see two quarterbacks he admired and that his UK commitment remained solid.

After some insane numbers throughout his junior season, South Carolina jumped on board the Jarren Williams train by extending him a scholarship offer.

Mark Richt in pursuit of the hot quarterback from his old stomping grounds. It was Williams’ 12th scholarship offer at the time and the second since he committed to Kentucky.

Bobby Petrino’s staff continued to fight the good fight despite Williams being committed to the rival school.

Stoops and Hinshaw checked in on their prized commitment at his high school on the third day of the fall contact period, one day after Louisville sent coaches.

Williams competed against fellow junior standouts from the state of Georgia in Atlanta’s Rising Senior Bowl. He connected on five of seven passes for 21 yards in a losing effort.

Fast forward to January when another SEC school threw an offer at Williams, making 13 offers on the offer sheet. Many more to come…

This time Williams was in town for Junior Day in Lexington.

Offer No. 14 in hand, yet another one from the SEC.

Williams now with offers from over half of the SEC.

“Alabama?! Here we go again,” we all thought.

Wildcats barely hanging on to that commitment, now that Williams is one of the hottest names in the game.

“After much thought and prayer, I have decided to decommit from Kentucky and open up my recruitment,” he wrote in a note on Twitter. “This is an opportunity of a lifetime and I want to make sure that I make the best informed decision regarding my future. Please respect my decision as I will not be doing any interviews regarding my decommitment.”

It was an understandable decision, considering the long list of new offers on the table from some of the sport’s top programs.

Kirby Smart trying to keep one of Georgia’s star QBs at home, while Vince Marrow and Darrin Hinshaw made the trip to get their former commitment back on board.

Recent @UKFootball commit @Jarren2Williams shined at the Charlotte Regional, and earned the 16th spot at the #Elite11 Finals. pic.twitter.com/QQntj0pcBr

He will go to Los Angeles in early June to compete against the best of the best quarterbacks in one of high school football’s premier events.

Fun Fact: 10 of the last 11 Heisman-winning quarterbacks were Elite 11 participants.

May 15: Jarren Williams RECOMMITS TO KENTUCKY.

On our very own KSR radio show, Jarren Williams announced to the world that he has recommitted to Kentucky and this time it is for good. He explained the decision to reopen his recruitment by telling us, “The reason I decommitted was because talking to the coaches and stuff and my parents, we had decided to take some more visits and do camps. Being the face of the class, out of respect for the university, I thought it would be best to go ahead and decommit. That was that and talking to Coach Hinshaw and Coach Stoops and praying about it a lot, I just really got that feeling that this was the spot for me and we just decided to shut it all down and come back home.”

When asked if he’s fully back on board for good, Williams said, “Oh yeah, this is it. I’m shutting it down. This is it now. I know where my heart belongs. I’m committed 100%. I’m shutting it all down.”

Great day to get outside and play your favorite dice game. ðŸŽ² pic.twitter.com/C6s0W6jbg0