A week after Kentucky lost its third game in a row, Mark Stoops’ coaching staff hit the road recruiting.

“It’s goods for us to get on the road, to continue to get in front of the prospects that we have committed, to continue to recruit and put the finishing touches on this class,” Stoops said at Monday’s press conference.

Kentucky may be struggling to win on the field, but that has not been the case on the recruiting trail. Vince Marrow is quick to praise the potential in the 2020 recruiting class.

“I think when we close this class out it has the potential to be better than our ’14 class,” said Marrow.

The 2014 class finished ranked 17th in the country, featuring future stars like Mike Edwards, Darius West, Boom Williams and Juice Johnson. Stoops believes the next group of UK signees could feature just as much star-power.

“We have an opportunity to have one of the most significant classes in, certainly in my tenure,” Stoops said. “I can’t go back into the history of this place, but in my time here this can be a very impressive group.”

As of October 2019, Kentucky’s 2020 class ranks 22nd in America, boasting five-star talent Justin Rogers and seven other players ranked as four-star prospects by at least one recruiting service. The reason why the coaches are so excited is that they consider UK’s 17-man class to be larger than you think.

Meanwhile, UK is looking to add more into the fold. With about 25 available scholarships, this weekend the Cats will host four-star Louisiana defensive back Joel Williams. During the bye week Marrow went to Kansas to offer a scholarship another cornerback, JUCO product Ronald Williams, and visit cornerback Brian George, considered one of the of the five best JUCO players in America.

“I’ve been a lot of places, covered some miles,” Marrow said. “To step your game up in recruiting you gotta have access to planes and stuff like that. You ever try to fly into Highland, Kansas, then try to be at a football game back in Ohio? I appreciate that. I did some traveling the last three days.” 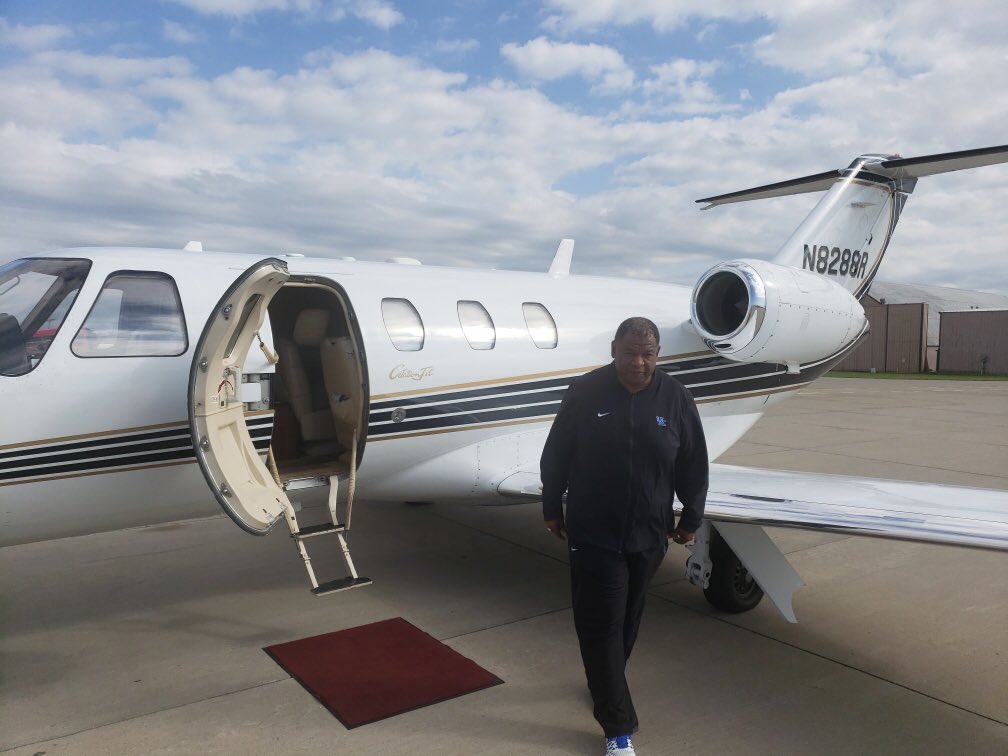 “Looking for only the best ballers in Kansas on the bye weekend,” Marrow Tweeted.

The recruiting trail isn’t as friendly in the middle of a three-game losing streak. Schools will be quick to throw Stoops’ program under the bus.

Marrow is well aware of the negative recruiting efforts by other schools. He responds to those questions by asking a question.

“If Justin Fields got hurt tomorrow, you think Ohio State is favored to go to the National Championship? No. If (Jake) Fromm at Georgia got hurt — it’s so different when it comes to Kentucky. We lost Terry Wilson. Terry Wilson won ten games for us last year and he was even better this year, but people seem to overlook that and we still had a chance to beat Florida without him. We have the pieces, but we really lost three quarterbacks. You lose Terry, you lose Gunnar (Hoak), you lose Danny Clark and then the guy we have come in, he gets hurt.

“When we talk to our recruits, they know the message. They know who we are. They know ain’t nothing changed. We’re not using it as an excuse, but I can guarantee you now if Justin Fields went down tomorrow, I bet oddsmakers would say they’re not going to win the Big Ten. We just take it as it comes.”

As other schools put down UK’s program, the Cats have a handful of talented four-star prospects in their crosshairs. Four-star defensive end Tyler Baron recently took an official visit to Lexington. Michael Drennen II officially visited the same weekend. Since the visit, UK has become the favorite to land the nation’s sixth-ranked all-purpose back. The Cats are also in good position for the state’s last two uncommitted four-star recruits, defensive back Vito Tisdale and defensive tackle Octavious Oxendine. Until they reach a decision, Stoops, Marrow and the rest of the staff will be out on the trail.

“You can take this message to other schools, of course people are going to take shots at you, even when you win or when you lose. There’s some schools, and they know who I’m talking about, all of a sudden they got the right ingredients down there. Time will tell. We’re anxious to get back on the field. We ain’t going nowhere. We’re going to keep recruiting and recruiting. While other guys were chilling on our bye week, we were recruiting.”

22 Comments for Despite Losses, a Historic UK Football Recruiting Class is Possible