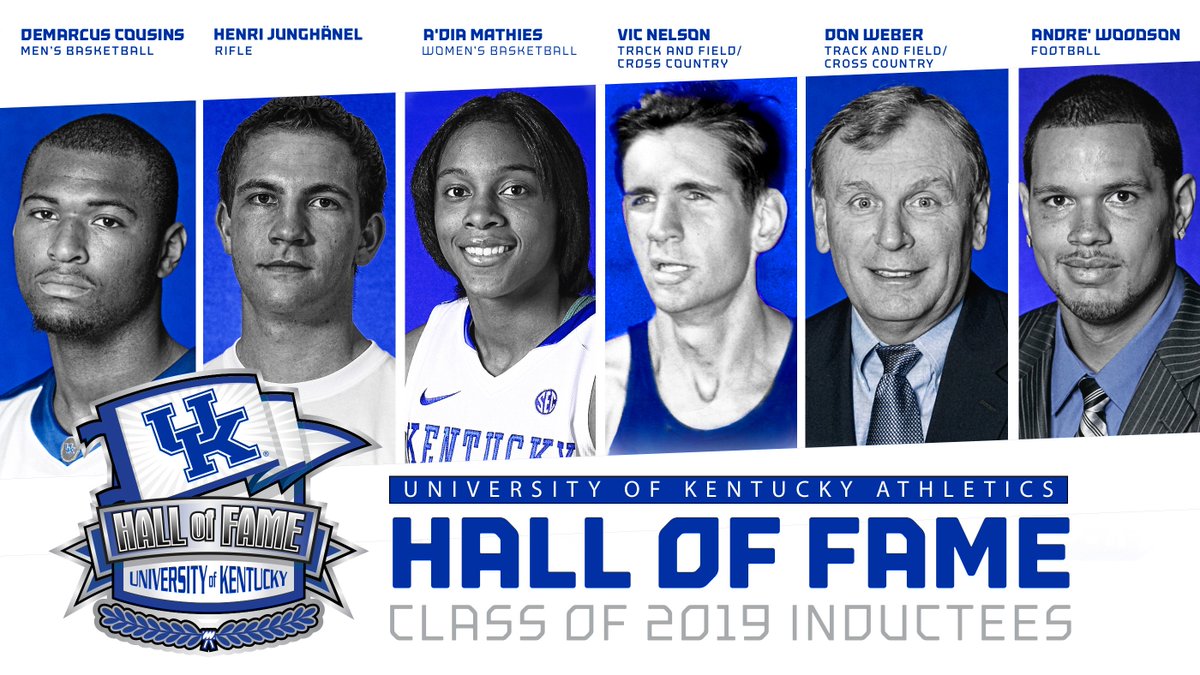 Cousins will be John Calipari’s third player inducted into the Hall of Fame, following John Wall and Anthony Davis. Before he was selected fifth overall in the NBA Draft, Boogie was a consensus All-American who averaged 15.1 points and 9.9 rebounds per game.

Only one other UK women’s basketball player scored more career points than A’dia Mathies. The Louisville native scored 2,014 points and is UK’s all-time leader in steals (320), games played (140) and started (139). The Cats advanced to four Sweet 16s and three Elite Eights with Mathies running the show between 2010-13.

Hall of Fame Weekend is set for September 13-14 when the football team hosts the Florida Gators. A look at the rest of the 2019 UK Athletics Hall of Fame class:

Olympic gold medalist, World Shooter of the Year, four-time All-American and the leading shooter on UK’s 2011 national champion rifle team … Led UK in shooting average for both air rifle and smallbore during the 2011 national champion campaign … Earned All-America distinction all four years as a Wildcat … Named World Shooter of the Year for 2013, his senior season … Won the gold medal at the 2016 Summer Olympics in the 50-meter prone event … Broke the Olympics finals record with a score of 209.5 … Also holds the 50-meter prone world record with a score of 211.2 points … Graduated with a degree in mechanical engineering.

Won seven SEC individual championships, at least one in each cross country, indoor track, and outdoor track … Swept the SEC outdoor three-mile crown all four years as a Wildcat, first male athlete in SEC history to win an event four consecutive years … Won the individual SEC cross country championship in 1969 and helped UK to the 1970 SEC team title … Claimed the SEC indoor two-mile run in 1970 and 1971 … Advanced to eight NCAA Championships, participating in a total of 11 events … 1971 UK Athlete of the Year  by the K Association … Won an NCAA post-graduate scholarship … Currently a professor and assistant head of the electrical and computer engineering department at Auburn … Has been a track meet official at Auburn since 1979.

The complete credentials for Cousins, Mathies and Woodson:

NCAA Consensus Second Team All-American, including first-team nod from the AP … 2010 SEC Freshman of the Year by the league’s coaches … All-SEC First Team (AP and coaches) … Made the SEC All-Freshman Team … Led UK to a No. 1 national ranking, an SEC regular-season championship and an SEC Tournament championship … Averaged 15.1 points and 9.9 rebounds … Concluded freshman season with eighth-most rebounds in a single season in UK history with 375 … Selected the fifth overall pick in the 2010 NBA Draft … Four-time NBA All-Star in his nine-year NBA career … Named to All-NBA Second Team in 2015 and 2016 … Averaged double figures in every NBA season, including 20-plus points in five years.

Kentucky’s Most Valuable Player in 2006 and ’07, leading the Wildcats to a pair of eight-win seasons and victories in the Music City Bowls … Also MVP of both bowl wins … Led UK to six fourth-quarter/overtime come-from-behind wins as a junior and senior, including victories over No. 9 Louisville and No. 1 LSU … Threw for 9,360 yards and 79 touchdowns in his career … Magnificent senior season, completing 63 percent of his passes for 3,709 yards and 40 TDs … Set NCAA record for most consecutive passes without an interception … Set SEC record for most TD passes in a season (40) and lowest interception ratio in a career … All totaled, set two NCAA records, four SEC records and three UK records.