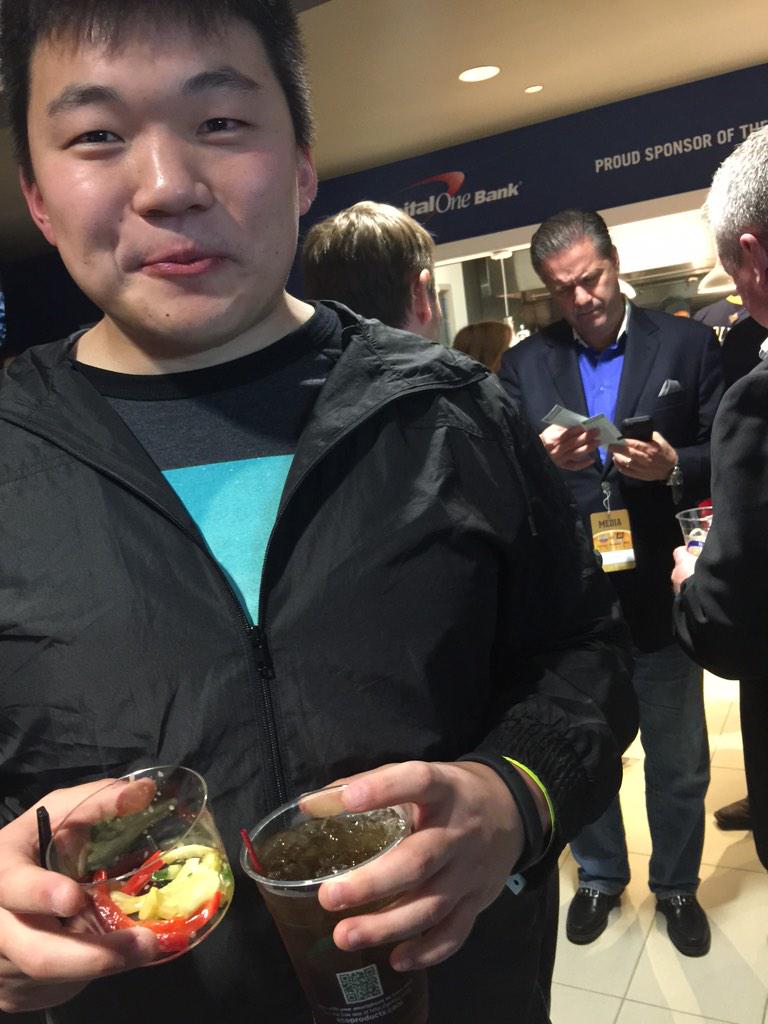 While you and I sat around watching Louisville lose the Belk Bowl Tuesday night, John Calipari was out being John Calipari, this time in New Orleans. Cal stopped by the Smoothie King Center to watch the Pelicans host the Suns in a game that featured four of his former players: Anthony Davis, Tyreke Evans, Eric Bledsoe and Archie Goodwin.

Tomorrow night he will travel to Myrtle Beach to watch Stephen Zimmerman in the Beach Ball Classic on New Year’s Eve. The man can’t stop going. (Until he can’t find his seat.)

In rather surprising Tuesday news, UK target Antonio Blakeney is ready to announce his college decision and will do so live on ESPNU this Friday. The five-star scoring guard plans to take his talents to the Southeastern Conference in college as he is down to Kentucky, LSU and Missouri.

Blakeney is very close to future UK guard Isaiah Briscoe, but he’s also close to future LSU Tiger Ben Simmons, the No. 1 player in the class. It’s unclear which way he is leaning as of now but my uninformed opinion gives the slight edge to LSU. The timing is odd considering Cal visited Newman on Monday; Simmons tweeted Blakeney on Tuesday; and Blakeney recently said he’s watching who will return to UK, and UK will likely have two stars return to the backcourt in Tyler Ulis and Devin Booker.

Then again, I know nothing about Blakeney or what he’s thinking so pay me no mind on this one. I’ll tune in at 4:30 on Friday to find out, unless it leaks before then. (And it will.)

Coach Cal asked Isaiah Thomas how to get the most out of Tyler Ulis.

Another note from New Orleans, where Cal said he talked to Phoenix’s Isaiah Thomas about what it’s like being a 5-foot-9 point guard in the NBA. Cal picked the former Washington Husky’s brain in hopes of learning a few things he can take back to Tyler Ulis.

And that was your fun Isaiah Thomas Fact of the Day. You’re welcome.

Academy Award-nominee Chris Jones landed a spot on the bench in Louisville’s Tuesday night contest with Long Beach State. After the game, Ricky P told reporters, “I didn’t start Chris not because of his shooting percentage, I didn’t start him because of the flop issue. I was very upset at that. We don’t do that type of thing and then to fake it with the jaw like he got hit. You can’t fake it, in junior college you do it, but it is on TV and you can’t fake those things and I told him you are not playing because of that incident, that is something Louisville guys don’t do.”

Jones played only nine minutes without taking a shot in Louisville’s win. He told the Courier-Journal he was embarrassed after watching a replay of the flop, admitting he did it all the time in junior college when there were no cameras and reviews, but it won’t happen again.

Meeks hit 6-of-6 three-pointers in the first half and finished 9-for-11 from downtown in Detroit’s win in Orlando. The former Cat scored a game-high 34 points in 27 minutes off the bench and his nine threes are the most in a single NBA game this season.

Lakers fans are wondering why he was let go. It’s a fair question.

If you didn’t read this Louisville fan’s post, do it now.

One Louisville basketball fan called it like he sees it in a guest post for CardChronicle.com. He said the UK-UofL series needs to end because it’s embarrassing for the Cards.  A teaser:

WE NEED TO IMMEDIATELY SHUT DOWN OUR REGULAR SEASON SERIES WITH KENTUCKY! PERIOD! If this were a UFC fight, we’d be tapped out, knocked out, or sung to sleep with a choke hold. If this were a boxing match our corner would be throwing in the towel. If this were a high school football game the mercy rule would be applied. If this were the playground we’d be screaming UNCLE while the school bully laughed (which is what UK fans are doing) while twisting our arm.

Is this the best in-game high school dunk ever?

The Bulldogs lost to 5-5 McNeese State, 66-47, on their home floor Tuesday night. McNeese State entered the game with back-to-back home losses to Central Michigan by 29 and Toledo by 14.

Florida’s own goal to beat Florida is one of the funniest things you’ll see all week.

In case you missed it below, Florida broke a tie game by tipping in a Florida State buzzer-beater to lose the game.

The Gators are now 7-5 on the season and UK’s undefeated run through the regular season looks better than ever.