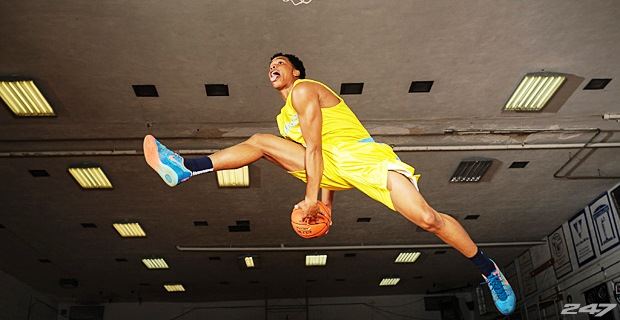 Where in the world is John Calipari today? Chicago, where he’s watching several targets in the Nike Global Challenge. Malik Monk, Miles Bridges, and Marques Bolden are among the 2016 stars Cal’s watching, along with a handful of 2017 targets.

Bridges dominated the Peach Jam last weekend, averaging 22.8 points and 10 rebounds. Most believe it’s down to Kentucky and Michigan State for the 6’7″ 225 lbs. wing, who is probably Kentucky’s backup plan if/when Harry Giles goes to Duke. Yesterday, he told SB Nation he plans on committed by December. Although Tom Izzo has been recruiting him since he was in 10th grade, he said getting an offer from Kentucky was a huge moment.

“Kentucky is a great offer,” Bridges said. “It was just a great feeling. I’ve grown up watching up them, so to get that offer was amazing. I talk to Coach Calipari almost every single day. I talk to (assistant) Coach (Kenny) Payne every day, too.

“I’m the person they want from my class. They want me to come in immediately and play.”

Here’s footage of him showing out in front of Cal and Izzo last weekend: